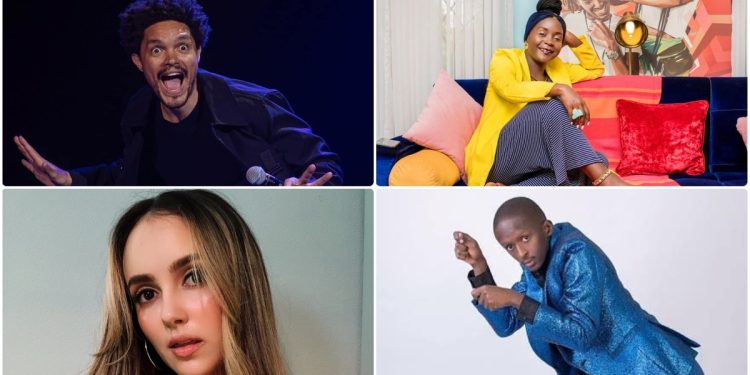 Africa’s richest YouTubers and their net worth

A decade ago, content creators on YouTube did it for fun, with millionaires coming mainly from the business world.

In the last few years, content creation has picked up after the monetisation of the platform. Vloggers now make millions from YouTube as they use their channels for advertising.

In Africa, the richest YouTubers smile all the way to the bank based on their views and impressions from their audience.

Who are the richest YouTubers in Africa?

Trevor Noah is a South African comedian, actor, television host and political commentator. The YouTuber was born on February 20, 1984, in South Africa but he’s based in the United States of America (USA).

According to a report by Celebrity Net Worth, Noah is worth over US$100 million. The comedian started his YouTube channel on October 20, 2006, and boasts 3.32 million subscribers.

The Algerian YouTuber is renowned for her food channel. With her face covered, Walid shows her Arabic fans how to prepare different cuisines.

Walid has showcased her cooking skills to over 10.8 million subscribers since October 2, 2015. Her net worth is estimated at US$5.43 million, as reported by networthspot.com.

The 28-year-old South African runs a YouTube channel named @Caspar. In 2011, when he created his YouTube channel, he named it Disease but later renamed it Caspar.

In 2020, the entrepreneur was listed in Forbes 30 under 30 for his advertising and media work.

His channel has over 6.73 million subscribers, but he has since stopped posting to focus on his marketing agency and talent management companies. Caspar’s net worth is estimated at US$4 million.

The Kenyan comedian was previously an actor before he transitioned to content creation. He featured in a local Kenyan comedy series, the Real Househelps of Kawangware.

He’s commonly known by his stage name – Njugush. He has posted 794 videos on his YouTube channel with over 593,000 subscribers.

Njugush posts funny videos on his channel alongside his wife Celestine Ndinda, popularly referred to as Wakavinye. He also runs a clothing business and is worth approximately US$2 million.

The Nigerian has featured several big names in his funny videos, including Emmanuela. The 31-year-old video producer runs a YouTube channel @MarkAngel comedy with 8.37 million subscribers. He’s worth over US$1.5 million.

The Algerian YouTuber has been running his channel since September 20, 2011. Due to his humorous skits, he has gained 3.01 million subscribers on the platform. Tina’s net worth is estimated at US$1.5 million.

The Ugandan comedian doubles up as an actress. She was born on April 13, 1986. Kansiime is one of the richest YouTubers in Africa, with an estimated net worth of US$1.5 million. The entertainer started her YouTube channel on April 17, 2012, with over 1.3 million subscribers.

Wode was born on November 8, 1990, in Ghana as Berthold Kobby Winkler Ackon. The aeronautical engineer boasts 1.12 million subscribers. Maya, worth US$1.5 million, showcases African culture and lifestyle on his channel.

The South African national has been sharing recipes on how to prepare yummy meals. She also posts weight loss videos. Jayne joined YouTube on June 9, 2014, and has over 1.07 million subscribers. Her net worth is estimated at US$1.5 million.

READ: Kenya’s richest counties and what they produce

KQ, Virgin Atlantic in deal to extend reach in Middle East, US, and Caribbean via London