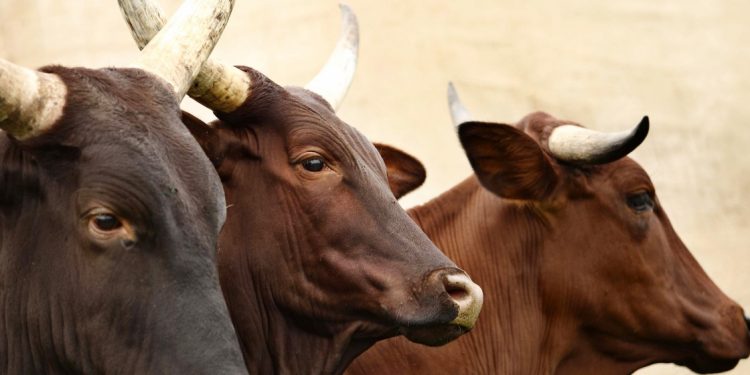 by Padili Mikomangwa
in Agribusiness, Industry and Trade, Tanzania, Uncategorized
0
Share on FacebookShare on LinkedIn

The sub-sector undoubtedly generates millions to serious investors, but it stands to generate billions to the entire nation, under ameliorated sectorial strategies.

On March 10, 2019, Tanzania brought to life, the Livestock Master Plan (TLMP) which allocated over $ 608 million in its realization, 64 per cent of the funding is foreseen to be fetched from the private sector and 36 per cent originating from government funding.

The TLMP is a five-year plan strictly set up to address major challenges facing the sector and transform via guiding viable investments in major profitable subsectors.

In realization of the grand plan, the government of Tanzania requested: the International Livestock Research Institute (ILRI) provided technical assistance and training to the Tanzania Ministry of Livestock and Fisheries in a project funded by the Bill & Melinda Gates Foundation.

The encouraging growth is attributed to significant improvement in sectorial investment environment and increment of charges per imported liter of milk, which rose from $ 0.065 (TSH 150) to $ 0.87 (TSH 2000).

According to ILRI, TLMP displays several crucial strategies to boost the livestock sector including the establishment of more ranches for meat cattle; growing or importing more feed, increasing the coverage of vaccines for local chicken and better management of African swine fever.

The TLMP also calls for the improvement of technical expertise in the sector via the introduction of enhanced capacity building programmes, and the establishment of more industries for meat production, milk processing, and leather processing.

Further, the National Bureau of Statistics of Tanzania (NBS) data ranks Tanzania second in Africa in terms of cattle population. More importantly, livestock-related activities contribute only 7.4 per cent to nation’s GDP and growth of the livestock sector at 2.6 per cent which is significantly low compared to the available potential.

In that context, over time and space, the absence of a strategic plan to develop the livestock sector has persistently hampered the successful implementation of previous investment plans for the sector.

During the launch of the plan, Barry Shapiro, a senior livestock development advisor at ILRI and team leader for the development of the TLMP, said that the livestock sector accounts for around 30-40% of agricultural economies in many developing countries, but public investment often accounts for only three to four per cent.

Hence, the TLMP development team found that 70% of potential value-added livestock products are not realized because Tanzania lacks sufficient industries.

However, the master plan is set to address the problem at hand and other challenges via training government experts and planners to carry out fact-based and realistic investment planning and implementation

On the contrary, Tanzania has taken yet considerable initiatives in securing and improving internal meat markets, by meliorating sectorial investment environments and effective management of meat importation, which resulted in 63.15 per cent reduction in meat importation.

In the fiscal year 2018/2019, the ministry had a concise collection target of over $ 8 million, of which by May 2019, over $ 14.6 million was gathered from the livestock sector, which accounted for 183.1 per cent of the sector collection target.

Patently, the government of Tanzania envisions collecting more at the same time enhance its revenue collection methodologies within the sector’s stream, particularly within the livestock sector.

Per Ministry 2018/ 2019 revenue generation data, market fee (22 per cent), export duty license fees (13 per cent), fines (9 per cent), services related to livestock keeping such as vaccinations ( over $ 2 million), cow sales (2 per cent) and movement permits (23 per cent) are recorded as the prime sources of revenue to the sub-sector.

In relation to the presidential document of 2002 which directed all district councils across Tanzania to contribute only 15 per cent of their livestock revenue, the ministry executed a comprehensive evaluation on the latter within 2017/ 2018.

The ministry results prove Tanzania can secure billions under careful and calculated sectorial decisions, whereby—out of 185 councils, 130 councils collected over $7 million and $ 596,899 (7.9 per cent of the total collection) was allocated on livestock sector development.

In realization of the context, TLMP aligns perfectly with other relevant and strategic long and mid-term plans, including development plans including Tanzania Development Vision 2025, National Strategy for Growth and Reduction of Poverty  (MKUKUTA) and Vision 2020.