With bated breath, the world awaits the verdict of the winner of the U.S presidential elections. Will it be the incumbent President Donald Trump or his running mate former vice president Joe Biden? As the clock ticks, the hour of the announcement of the results draws nigh and the suspense continues to mount, for both Americans and the world at large. The anticipated results will have a global ripple effect, not only dictating the future of America but of the international political landscape as well.

Kenya has enjoyed cordial diplomatic relations with the United States, in tandem maintaining a solid partnership, that has endured since the country’s independence. Both countries have worked closely together, over the years on many initiatives, such as counterterrorism, boosting healthcare, strengthening the agricultural sector and supporting education. Kenya is recognized as an economic powerhouse, in the continent and is a key strategic trade partner to the US; in 2019, trade between the United States and Kenya was estimated at $1.1 billion, recording a 4.9% increase from 2018. Top US imports from Kenya were apparel, estimated at $454 million, edible fruit and nuts at $55 million, titanium ores and concentrates at $52million and coffee at $34 million. Top exports to Kenya from the US in 2019 were aircraft estimated at $59million, plastics at $58million, machinery at $41 million and cereals at $27million. 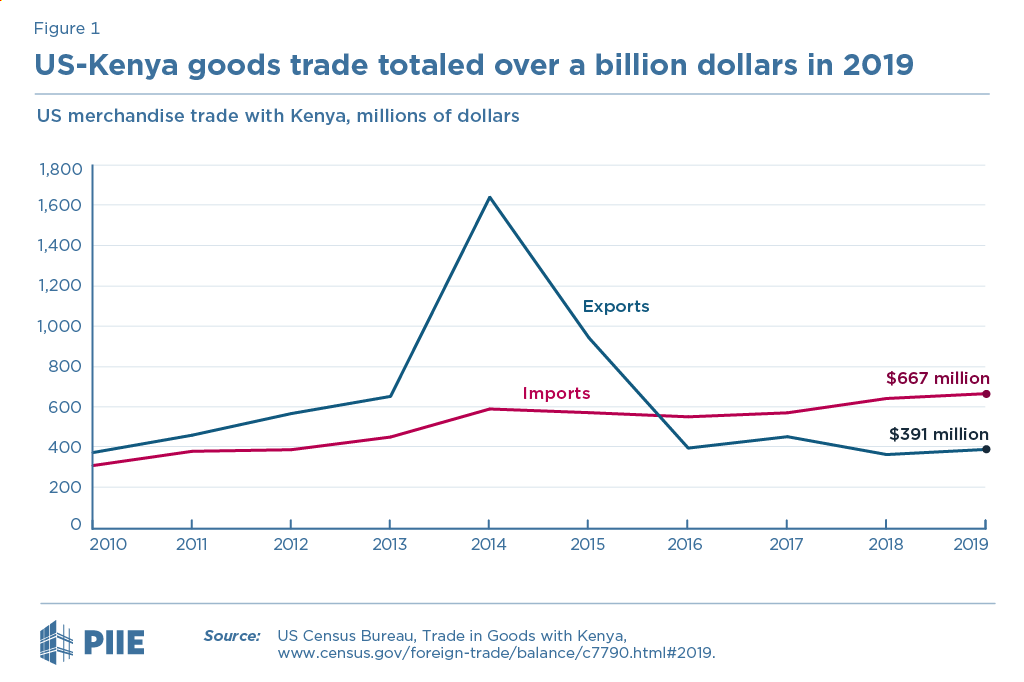 Inarguably, America’s choice, will have a direct impact on Kenya, pertinently, in regards to trade and commerce. Currently, the very mention of the US and Kenya relations immediately casts a spotlight on the Free Trade Agreement (FTA), whose negotiations commenced early in July, despite the Covid-19 pandemic. However, uncertainty lurks in its future and the answer to the lingering burning question remains; If Biden takes the helm of leadership, will the negotiations be scuttled or will his administration perpetuate the continuity of this lucrative initiative? On the flip side, if Trump reclaims his position as president, will both governments, find common ground that is mutually beneficial, without Kenya compromising its position and rapport with other African countries? The ramifications of this agreement are dire to not only Kenya but Africa as a whole, as it will serve to complement Africa’s regional integration efforts, bolstering both the East African Community(EAC) and the African Continental Free Trade Area (AfCFTA). Consequently, laying groundwork upon which other African nations, can negotiate bilateral arrangements within the AfCFTA framework going forward. The outcome of the negotiations is crucial, as it will mark the first bilateral trade agreement with a country in the Sub –Sahara Africa.

A Brush of the history of Kenya-US Relations

The war on terror especially after the bombing of the US embassy, in Nairobi in 1998, has intensified co-operation between the two governments over the years, to address all forms of insecurity and particularly terrorism. The US has been playing a pivotal role, in strengthening both the military and civilian Kenya Security Forces, through the provision of training and equipment. To further bolster these efforts on counterterrorism, the US invested heavily into non-governmental organizations (NGOs) operating in Kenya; increasing funding by billions. 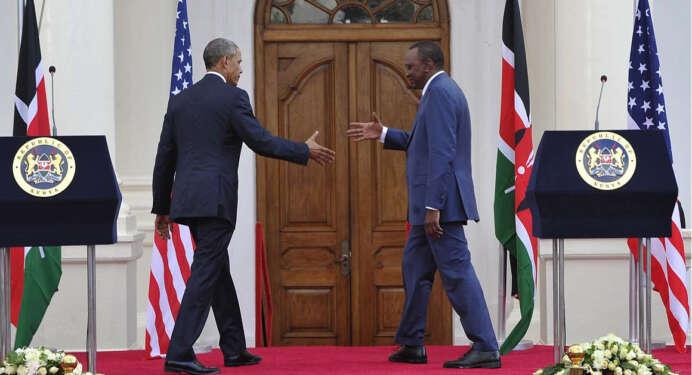 The election of Barrack Obama was greeted with great pride, enthusiasm and optimism from Kenya, attributed to the heritage of his Kenyan father. He was also the first sitting president to visit Kenya and further spurred relations, between the two governments, some continued from President George W Bush’s administration, particularly counterterrorism, whilst others initiated under his regime, based on the pillars of strengthening the economy, promoting democracy, bolstering access to education and conflict management.

The Uncertain Future of the Free Trade Agreement 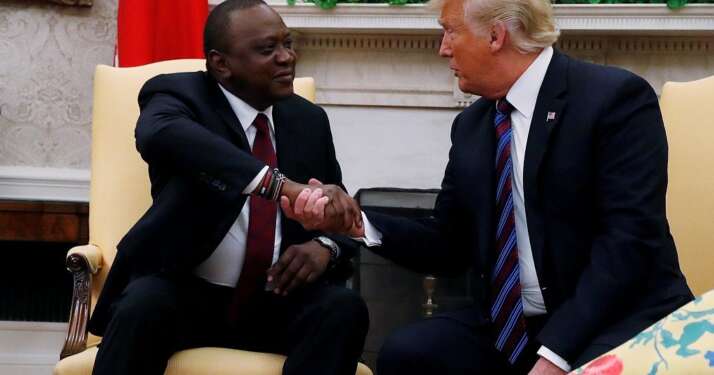 President Donald J. Trump and President Uhuru Kenyatta, established the U.S.-Kenya Trade and Investment Working Group, in 2018, under the bilateral commercial memorandum of understanding (MOU), to explore ways to deepen the trade and investment ties, between the two countries, in strategic sectors such the digital economy, health, energy, agriculture, infrastructure and manufacturing; to forge a stronger commercial future.

The group identified key focus areas into the fruition of this endeavour; to strengthen commercial co-operation, develop short-term solutions, to reduce barriers to trade and investment, maximize the remaining years, of the African Growth and Opportunity Act(AGOA) and pursue exploratory talks, on a future bilateral trade and investment framework. Both governments identified chapters, on which each plans to negotiate and find common ground. President Uhuru Kenyatta is one of the few African leaders, to have established a positive rapport, with President Trump and is the only African leader, to have made two visits to the white house. Both governments share a vision, to promote commercial co-operation and remain steadfast, in the commitment, to reach a successful outcome for the prosperity of both nations.

Under the agreement, Kenya hopes to attract Foreign Direct Investment, from the United States, to boost different sectors of the economy; expand job opportunities, whilst catalyzing other value chains, which will prove beneficial to Micro and Small Enterprises in Kenya. Both governments also agreed upon a Strategic Cooperation Framework, to provide technical assistance and trade capacity building in Kenya. 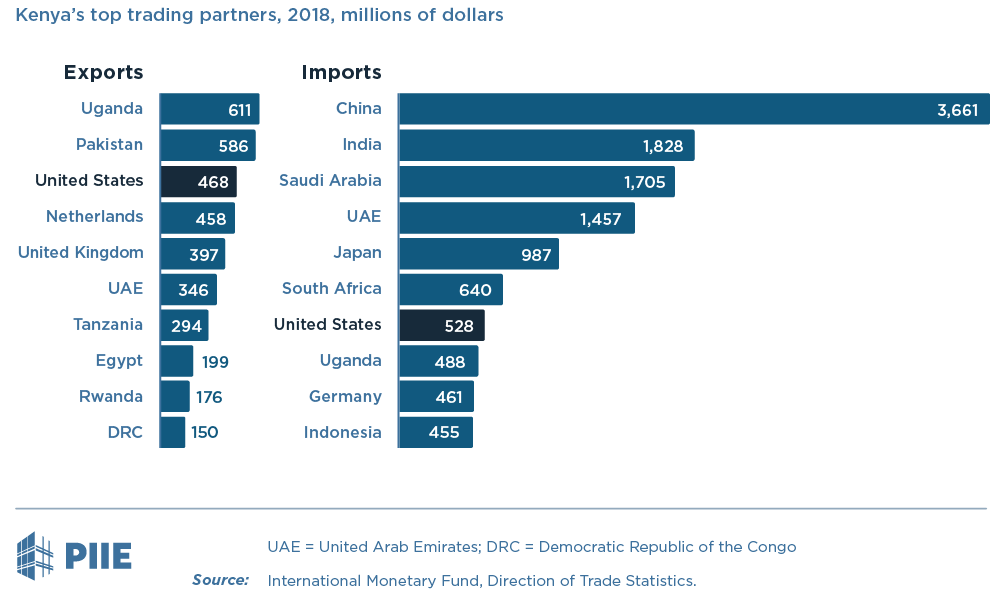 However, concerns arise over the trade deal, the manufacturing sector, which is a pillar under the Big 4 Agenda, in the ultimate realization of vision 2030, faces an uncertain future, of stifled development. Kenya exports to the US mostly comprises of raw materials, whilst US exports to Kenya are largely processed goods. Another potential dilemma, is the divergent stance, on Genetically Modified Organisms (GMOs), by both countries, clashing perspectives, as Kenya firmly stands against the importation of genetically modified foods, which are prohibited to even enter or transit Kenyan ports, for other destinations, whilst the US, has robust GMOs’ industries, that improve yields and seeks to increase market access in Kenya. Increase in exports of products developed using agricultural technology will asphyxiate the agricultural sector, thereby jeopardizing the livelihoods of many farmers. The deal could also antagonize the relations between Kenya and other African countries, as it is already a member of a number of regional trade agreements, who view it as a lack of good faith in the regional bloc. The somewhat bad blood as evidenced in the choice of hosting the AfCFTA headquarters, in Ghana as opposed to Kenya.

Undoubtedly, Kenya needs the support of its neighbours, especially in vying for elective positions in the international organizations, such the recent search for Director-General post, by the World Trade Organization (WTO), of which Ambassador Dr Amina Mohammed, was nominated for, but needs the support of other African nations, which make up for 35%, of WTO’s developing countries membership.

Trade negotiations could span for a number of years, the expiry of president Uhuru’s term in 2022, could also pose a challenge if a resolution will not have been arrived at by that time, upon which he has pegged his legacy. As counting ensues, the presidential race nears the end, with Joe Biden narrowly ahead of president Trump; to claim victory or defeat would be premature.