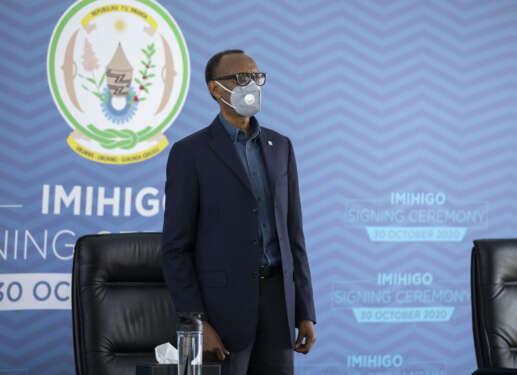 A Blue print for legitimacy in Africa

Six lessons from Rwanda’s handling of the COVID-19 Pandemic

by Opinion
in Africa, Rwanda
0
Share on FacebookShare on LinkedIn

The COVID-19 pandemic has brought into sharp focus governance on the African continent. The response from one country to another has differed and those that have fared well are those with strong discipline and efficient systems of governance. They are also countries where governments enjoy a high degree of trust from their citizens.

Here are six key lessons that need to be highlighted that might serve as a blueprint on how to govern better in Africa.

“Discipline is the bridge between goals and accomplishments”.

The first lesson to be drawn is that you need leaders who are disciplined and can run government business with a certain degree of strictness. There are many on the continent who want to do the right thing but who lack discipline and are pulled in different directions. Just like the rest of the world, Rwanda imposed a lockdown in March 2020. It was among the first countries on the continent to ask citizens to stay at home in order to contain the spread of the virus. Citizens followed suit because they knew that the government would impose its decisions unfailingly.

The second lesson is that you need systems of government that work. The right hand must know what the left hand is doing and institutions must be mutually reinforcing. Senegal, Botswana and Rwanda adopted measures to improve their healthcare systems. With little equipment available at first, Rwanda rapidly set up water taps in public places that are at higher risk of fast and easy spread of the virus. Tests were and are still being made on a large scale, which gave the country the chance to know how to deal with the day-to-day cases and carry out contact tracing efficiently. The government has also demonstrated that ensuring citizens are healthy even during a pandemic remained a priority. It did not stop there; financial institutions both private and public were encouraged to offer financial assistance in the form of money and food staples to help those heavily affected by the pandemic. As of April 2020, the Rwandan government through a door-to-door approach donated food to about 20,000 households.

The third lesson is that leadership must constantly adapt and innovate. When schools closed in March 2020, the Rwandan government had to cope with the unplanned changes and began providing lessons on radios and television as a way of keeping educated those students who did not have the opportunity to do online learning. It also moved to review the education system and many flaws were found turning the crisis into an opportunity to reform. This is still a work in progress.

As the numbers of COVID-19 cases increased and hospitals filled with a number of patients, hotels and schools were used as health centres and it became evident that investing in infrastructural development such as building schools, hospitals, roads, electricity poles, and water supply pipes was a national priority.

The fourth lesson is information-sharing through social media—a powerful tool. It is expanding the reach of information about political, public actors and government actions much wider than was previously possible and gives people the opportunity to make their own assessments of performance on a daily basis and in real time. While it is true some of the criticism may be harsh, and one may think unfair, it comes with the responsibility of leadership and you just have to take it in your stride. Rwanda has used these platforms widely to engage its citizens.

The fifth important lesson is citizen engagement. Over the years, different categories of Rwandans have had a chance to speak out and discuss their challenges and ideas with the head of state through the “meet the president” series. The president gets to meet entrepreneurs, the diaspora, reporters and other groups to share ideas on how to develop the country both qualitatively and quantitatively. This is done to give a platform to the public to express their concerns directly to the president who believes in the notion of servant leadership.

The last lesson is that legitimacy has to be earned on a daily basis. The Rwandan government is successful in dealing with COVID-19 because it has demonstrated on numerous occasions that it delivers for its citizens. Indeed, it is in moments like these that citizens hold their governments accountable for their welfare.

The world has been caught unprepared and we are still learning a lot. In our region, the approaches have differed but there are good practices that have worked that we can all borrow from. In Rwanda, we are proud of the performance of our institutions that continue to work hard to provide good services. In the end, what matters to people is knowing that their government looks out for their interests even when times are difficult.

Legitimacy is not a one-time event but a daily exercise.