Across the Global South, agriculture is essential to livelihoods for the majority of women at the base of the pyramid (BOP). Modernising agribusiness value chains in climate-smart ways will be a key element in building emerging economies, combating food and income insecurity, and mitigating the impacts of climate change. This modernisation must take a gender-progressive approach, which requires a shift in the investment landscape to better integrate gender, from capitalising women-led companies to ensuring women farmers are empowered across the value chain. Not only are such approaches vital to SDG 5 (Gender Equality), they are directly relevant to climate action and building sustainable economies.

The impact of climate change on agricultural production has been well-documented, from the shifts in average temperatures and rainfall patterns to ozone and mineral concentrations in the atmosphere and soil – but the relationship goes both ways. Agriculture is a significant driver of climate change, with 17% of global greenhouse gases (GHG) emitted directly from agricultural activities and an additional 7%-14% related to land use. Since more than one-quarter of the world’s GHG emissions come from such activities, the improvement and innovation of agribusiness value chains  is  a powerful and underleveraged ally in the fight against climate change. Improved agricultural processes and business models have the potential to reduce up to 4.6 GtCO2e* (gigatonnes of equivalent carbon dioxide) by 2050, compared with emissions under a business-as-usual base case. Clear pathways have already been identified to decrease total emissions by at least 20% from agriculture, forestry, and land-use changes.

Women are at the sharp end of climate change, not only because they are the hardest hit by its impacts but also because they play a significant role in agricultural production worldwide (particularly in the sector’s most vulnerable segments). This doubles the opportunity to apply gender-sensitive approaches to environmental sustainability. According to the Food and Agricultural Organization of the United Nations (FAO), women comprise 37% of the rural agricultural workforce globally and 48% in low income countries. Women are most represented in the least well-capitalised parts of the value chain; for example, while women producers generate the majority of Africa’s food supply, they are nearly absent in the leadership of large agro-processors or distributors. Despite their significant representation in the agricultural industry, women face considerable barriers which limit their ability to obtain the same opportunities and make the same gains as men.

These compounding factors hinder large-scale sustainable agricultural innovation at the base of the pyramid, where women are most concentrated. Women-led farms produce 20-30% less than their male-led counterparts as they are less likely to have the same quality of inputs and technology to optimise production. While gender discrimination affects women’s access to financing across the world, there are additional gender-specific challenges that further hamper women’s sustainable agricultural production in emerging markets. For example, in some countries, legal frameworks obscure women’s land rights and in others, women’s primary and secondary education rates lag behind men’s by as much as 50%. These disparities are exacerbated by women’s lower earnings, which limit their access to transportation and technology; for example, the internet access gender gap in the least developed countries is over 42%, constraining women’s access to competitive pricing for crops or alternatives for inputs. Conversely, if women had equal access to credit, education and improved production mechanisms, it could increase food production by women by as much as 30%, potentially eliminating hunger for 150 million people. And what if this could all be done in a climate-friendly way? 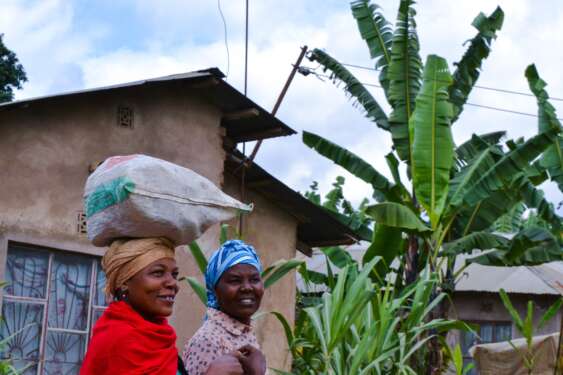 As impact investors, we have witnessed – and are delighted to continue seeking and supporting – approaches that can merge SDGs 2, 5 and 13, combining women’s empowerment, food security and climate action. In recent years, we’ve found this convergence across a few main themes, which we’ve highlighted for other gender-lens investors., including examples of some high-impact gender-smart companies:

ReelFruit (RF) is a female-founded and managed manufacturer and distributor of dried fruit and nuts based in Lagos, Nigeria which is single-handedly transforming the healthy snack food category in the country. Manufacturing jobs generally pay more, on average, but often exclude women either due to rigid scheduling or cultural bias which signals that men are more suitable for these positions. At RF, flexible working hours and employee benefits, such as family leave and healthcare, have ensured a gender-equitable workforce. Moreover, women hold all senior management positions, reversing industry norms. In addition, RF is overhauling operations for environmental sustainability, specifically aiming for zero waste by re-purposing all raw inputs it uses for production. In addition to new food lines, the company is experimenting with developing charcoal and other products from agricultural waste such as coconut shells. Innovative solutions are everywhere: for example, when implementing a new cooling facility, the team converted a recycled shipping container into a storage space and retrofitted a cooling unit to run on solar power. It provides a cost-efficient alternative and is a model for other companies in the manufacturing space in the country.

Nuts for Growth (N4G) is a shea nut and soya bean processing company with the ambition to create value-added shea products. The company sources all of its raw materials from 70,000 women in northern Ghana, most of whom are living at the base of the pyramid. In addition, they work with these women smallholders to ensure sourcing and production are optimised for environmental sustainability.  By focusing on complementary crops with subsequent growing seasons and rejuvenating the value chains for these agricultural products in Ghana, N4G creates year-round employment for economically marginalized women. The company also works with their suppliers to provide education to further enhance their earning capacity.

S4S Technologies is an Indian social enterprise that invents innovative food processing machines, thus improving agro-processing value chains and enabling farmers to increase their incomes. Most of their machines are also designed to reduce environmental harm from traditional agro-processing such as shifting from conventional to solar dehydration. In addition to selling to women farmers, S4S integrates primarily women-led micro-enterprises into its supply chains but had never explored how to use gender as a lever for commercial improvement. In 2020, S4S analysed the barriers faced by women microentrepreneurs in their supply chain (many of whom work from their homes or plots) and piloted a production process specifically to accommodate women’s outsized time constraints brought about by having 70% more household labour. This change increased production by 100% in a short time, opening the door for other companies to think about how they can use gender equality to improve commercial performance.

While we want to see more gender-smart approaches and business models such as those noted above, this requires greater support from the investment ecosystem. As is well-documented, women-led businesses face near-universal disparities in access to capital. While microfinance has helped ease some of these barriers for many women smallholder farmers, there is still a $1.7 trillion funding gap facing women-led companies, from women-led cooperatives to innovative startups raising Series A rounds. This limits expansion of gender-progressive business models, whether these are women-led agro-processing companies or social enterprises seeking to empower women micro-entrepreneurs in their supply chain.

At the same time, there are also capitalisation challenges for the types of agricultural innovation that hold great potential for gender impact and GHG reduction. A study by Deloitte found that asset-heavy social enterprise business models serving the base of the pyramid were among those with the greatest commercial viability challenges, which in turn dampens the company’s ability to raise equity funding. Moreover, debt is often handsomely priced in many relevant markets and blended financing models are not widely available.  While agriculture produces nearly a quarter of GHG, it contributes only 3% of GDP. Much of agricultural production in emerging markets occurs at the base of the pyramid where producers have limited financial means to invest in the innovations that would make agriculture more commercially viable and ecologically sustainable.

Additionally, as noted above, in most emerging markets, there is a dearth of capital available for entrepreneurs, particularly female entrepreneurs, and the capital that is available is often tied to high return expectations or specific impact expectations. Some investors have a checklist of ESG requirements that a company must already have in place in order to obtain funding. However, requiring companies at an early stage to take on a large range of environmentally-friendly practices without the requisite capital to sustain the business or concessionary capital to prove out the interventions, may inhibit the company’s ability to reach profitability and long-term sustainability. This is further complicated by the fact that investors have divergent viewpoints and a spectrum of risk appetites for climate-friendly investments especially for direct investments into early-stage companies.

The overhaul of current systems for a gender-smart, ecologically sustainable agricultural business model will require cross-sector collaboration and, specifically, catalytic capital that can support disruptive innovations at the climate-agriculture nexus.

Shell Foundation (SF) is a UK-registered charity, founded by Shell in 2000, that creates and scales business solutions to enhance access to energy and affordable transport, including accelerating access to energy for smallholder farmers in sub-Saharan Africa and South Asia through their CASEE programme, co-funded with FCDO.

This article was first published on www.gendersmartinvesting.com

This article forms part of a series from contributors to GenderSmart’s Gender and Climate Investment Working Group. For many, Gender and Climate Investing is a new field, but there is already a lot of great work and experience to share. By showcasing powerful examples from across the investment ecosystem, Working Group contributors are using their voices in the lead up to February’s GenderSmart Investing Summit and beyond to highlight the important role a combined gender and climate lens can play in delivering a just, green economy transition. Through this series, we hope to inspire the adoption of this approach across the financial system.