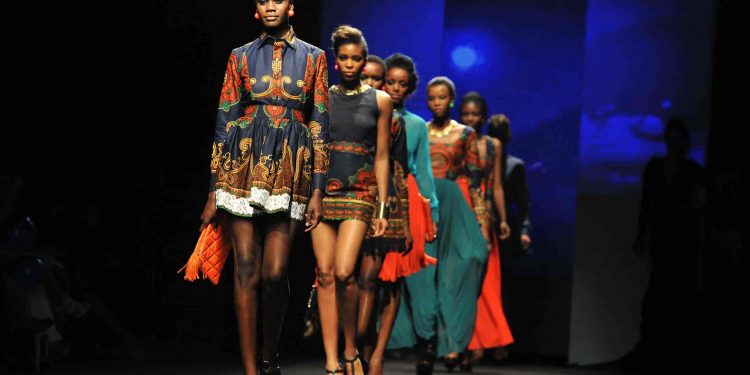 Sub-Saharan African clothing and footwear market is worth $31 billion US dollars and growing. Its diversity and growth has given rise to a budding industry employing millions of Africans. However, it is facing major challenges including intellectual rights and influx of cheap imports from China, Turkey, Europe and US.

by Kimani Chege
in Africa, Manufacturing
0
Share on FacebookShare on LinkedIn

Sub-Saharan African clothing and footwear market is worth $31 billion US dollars and growing. In a series of articles about the industry in Sub Sahara Africa, we will explore the policies, trade and the budding creative fashion industry in the region.

Africa drink, eat, and sleep fashion. The diversity of the culture of this huge continent ensures its almost 1.3 billion inhabitants wear or dream to wear certain clothing and apparel. With the population of the continent becoming younger by the day, the demand for fashion that sends a message and identity of an individual is becoming more relevant.

This diversity comes with its strengths and challenges. West Africa has a rich African infused fashion while East and Southern Africa has western influenced fashion and manner of dressing. Most of Northern Africa has a fashion industry dictated by middle eastern and Islamic culture.

Fashion is big business in Africa. The combined apparel and footwear market in sub-Saharan Africa is estimated to be worth US$ 31 billion, according to data from Euromonitor International. This ranges from simple clothing design lines in countries to more sophisticated industries in Economic Promotion Zones meant for the western market. 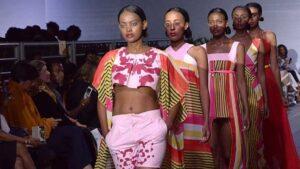 Africa’s clothing and fashion industry is still in its infancy. For example, the 10 largest textile exporters make up only 0.5% of worldwide textile production, reveals the AfDB. And although the continent produces 10% of the world’s cotton, much of this is exported to Asian markets, where it is spun into yarn and then woven into a fabric. Not enough value is added on the continent.

South Africa, Kenya, and Nigeria have been leading in developing strong fashion and design marketing and exhibition schemes, popularly known as fashion shows. Other countries are working hard to reach this level, with Mozambique, Ghana, Angola, DR Congo, Ivory Coast, Senegal and Mali being strong contenders of the next big fashion houses. The next contenders include Uganda, Tanzania, Egypt, and Burkina Faso. The Catwalk is not an easy fete and the industry has worked hard to steal the thunder from global fashion capitals like Paris, Milan, New York, and London.

However, it is facing major challenges including intellectual rights and the influx of cheap imports from China, Turkey, Europe, and the U.S.

History of the African Fashion Industry

Early African civilizations like the Malian Empire, The Ghanaian Empire, the Ethiopian Dynasty and other kingdoms across the continent were developed through trade in ivory, gold, salt, and garments. The modern fashion names we hear in Africa like Dashiki, Ankara, Kikoi, Kente, and Boubou have an origin in the ancient civilizations of Africa. Some of these have an extended origin like in India and Portugal but were perfected in Africa.

Recent history has also shown Africa taking great control of the fashion industry, though not able to compete with global fashion houses. The rise of pan Africanism which ensured that Africans could wear African attires and be proud. This was however dented as African embraced western fashion as a way of sending a status message only leaving a few countries in Western Africa which have remained loyal to local fashion trends.

Catwalks appeared in Africa in the pre-independence period though with a western kind of approach. This was mainly for entertainment and developing lines for the colonial settlers. Rarely did the African participate but the Asian population was allowed to trade and participate in these kinds of shows. 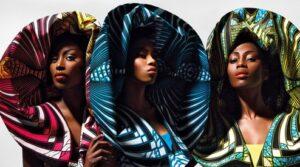 The raw materials for the African Textile Industry

Africa cotton industry has had ups and downs. From one of the thriving industries in East Africa in the early 60s and 70s to a sector lying flat on its belly. Poor crop husbandry, pests, and diseases, as well as the rise of synthetic raw materials, have been blamed for the loss. Equally, the continent has been imported tonnes of finished and sometimes second-hand clothes crippling the textile industry.

Similar raw materials sector like wool and silk which have remained low despite efforts by local governments to promote the sector. Leather, which also is key in the production of African footwear has been facing similar challenges. It is easier to import a synthetic shoe from China than to make a local one.

The rise of the Creative industry and tech designers

The fashion industry in Africa is rapidly evolving. A recent event in South Africa brought together fashion designers with a different twist. The three iconic African fashion designers were brought on board to create 12 extraordinary outfits from vast amounts of data extracted from the cities of Nairobi, Lagos, and Johannesburg. The intricate garments by John Kaveke (Kenyan), Zizi Cardow (Nigerian) and Palesa Mokubung (South African) outline a variety of patterns from power grids, shipping and tonnage to population densities, transport and areas of connectivity. Data from each of these sectors tell a powerful story about each city and how digitalization can transform them. All of this is told through the universal language of fashion and design.

This shows the changing face of fashion and design in Africa, where the old catwalk mainly featured non-themed designs some borrowed from the west. In a similar twist, Mozambique hosted a fashion show for showcasing women hygiene. The modern fashion show has a strong message to carry.

Mettā, the entrepreneurship meeting place in Nairobi has announced its third fashion product lab cohort powered by HIVOS East Africa. The designers accepted into the program were selected after a rigorous multi-phase selection process which focused on the viability of their fashion businesses, creative designs and portfolio, and their potential to scale across the continent and globally.

Mettā Nairobi, in partnership with HIVOS East Africa, is set to bring five fashion startups to Nairobi for its third Bootcamp program – Fashion Product Lab 3.0. Selected from 300 applications all over the country, the 5 startups will kick off the programme in August.

Read also: Nairobi in the business of fashion as HUGO BOSS knocks

Economics breakdown of the fashion industry in Africa

Africa is already looking at the fashion industry as a key driver in employment and trade in the continent. There have been efforts for engagement, dialogue, strategy, and policies to advance the African fashion industry within the context of the African Continental Free Trade Area (AfCFTA), which aims to remove trade barriers between African nations and thus expand intra-Africa trade by about $35 billion per year. Intra-African imports and exports currently account for just 15 percent of all trade on the continent.

Fashion accounts for the second-largest number of jobs in developing countries after agriculture. In the next five years, Africa’s textile industry could generate $15.5 billion in revenue.

In Kenya for example, statistics show that every job in the garment sector in Kenya generates 5 other jobs. In Lesotho, thanks to the apparel industry (representing 94% of merchandise exports) GDP per capita increased from $558 in 2001 to $3000 in 2004.

Reaching the west and developing EPZ

Ethiopia is moving fast to cement its place as the leading exporter of global brands. Swedish and American companies have taken the incentives provided by the local government to set up factories and clothing industries across the country. 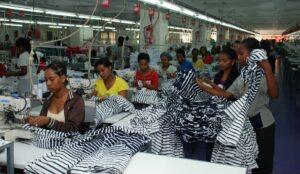 Intending to generate USD 30 billion in export revenue from the textile apparel and accessories sector by 2030, the country is investing in industrial parks to accelerate textile production and the country’s productivity as well as developing a heavy industry that will allow its full industrialization by 2025.

According to The Bank’s Fashionomics Africa Report, almost 80% of the workers employed in Ethiopia’s apparel sector are women. In addition to Ethiopia, the garment sector has been growing in South Africa, Mauritius, Madagascar and across North African countries – but much of the rest of the continent has a long way to go.

Kenya and other East African countries have been hailed as major beneficiaries of the AGOA act with thousands of tons shipped to the US. There was a storm however in Rwanda when it refused to participate in AGOA as it worked to shield its young fashion industry from the entry of cheap second-hand clothes from the U.S.