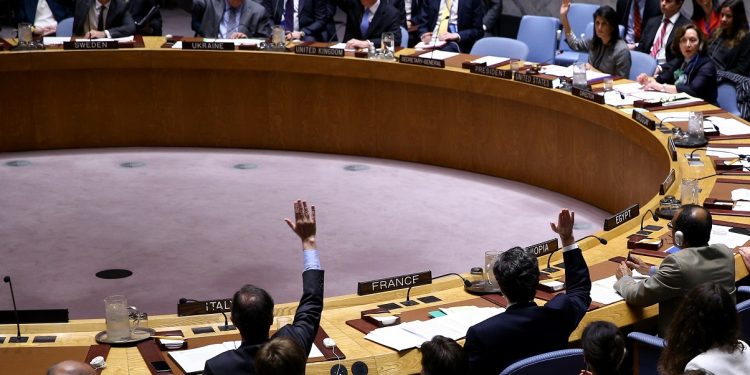 Kenya will compete for the non-permanent United Nations Security Council seat in 2021-2022. This is after it was endorsed by the AU member states. [Photo/ Africa Portal]

by Njenga Hakeenah
in Africa, United Nations(UN)
0
Share on FacebookShare on LinkedIn

The East African economic hub defeated Djibouti with 37 votes to 13 at the African Union (AU) headquarters in Addis Ababa, Ethiopia.

Kenya has campaigned for the seat globally and in the initial vote on August 5, it defeated Djibouti with 33 votes. At the time there were 16 abstentions.

At the AU headquarters, envoys representing member states voted in a secret ballot giving Kenya the nod to contest at the UN polls next year in June.

In the first round, Kenya fell short of securing the endorsement since substantial decisions can only be made on a two-thirds majority rule. The rule is based on a total of 55 AU member states.

The push for the UN seat started earnestly in 2018 with Kenya’s Foreign Affairs Cabinet Secretary Dr Monica Juma saying that the vote was a show of confidence in the East African nation.

She said that for Kenya to represent Africa’s agenda at the UNSC, it commits to the African brothers and sisters to be a bold voice for Africa to steadfastly promote and defend the African position.

Even though Kenya and Djibouti failed to agree on who should step down, the AU had often reached these decisions through consensus.

“I am sure Kenya will ably represent our great continent at the UNSC,” Amb Farah said when I congratulating Kenya.

Dr Juma said that the team led a spirited fight to ensure the endorsement of Kenya’s candidature for the non-permanent seat in the UNSC for the 2021/22.

She added, “This endorsement is an affirmation that Kenya has remained true to the decisions and aspirations of the African Union and confirms that it is a safe and dependable pair of hands.”

Despite the AU endorsement, Kenya still has to win at least a two-thirds vote of the UN member states in the election to be held in New York.

The Africa Group comprising all the African Union member States makes up 28 per cent of UN membership.

On the win, the CAS for Foreign Affairs, Ababu Namwamba said, “Kenya will continue to place ourselves at the service of Africa and the whole world in pursuit of peace, stability and shared prosperity.”

Why the UNSC for Africa?

The United Nations Security Council is responsible for the maintenance of international peace and security.

It has 15 members with one vote each.

The UNSC takes the lead in determining the existence of a threat to the peace or act of aggression.

It calls upon the parties to a dispute to settle it by peaceful means and recommends methods of adjustment or terms of settlement.

In some cases, the Security Council can resort to imposing sanctions or even authorize the use of force to maintain or restore international peace and security.

The UNSC seat reserved for Africa is available on a rotational basis for regional balance. For the 2021 vacancy which fell on eastern Africa, Kenya and Djibouti were the only two nations that showed interest.

Despite representing a whole continent, the UNSC seat is majorly ceremonial since Africa has no right to veto draft resolutions.

Speaking at the ministerial meeting of an Africa-Turkey summit,  Mokuy said Africa had to show the international community that the continent had the right to have two permanent seats in the Security Council with a veto right.

“It is time that we stand together, walk together and win together. We should, therefore, unite forces, share a common vision and utilize a common approach to solving common problems for the development of our people,” he said.

Former Deputy Chairperson of the African Union Commission Erastus J. O. Mwencha at the same time said that Africa must have a permanent seat, if not more, in the United Nations Security Council.

The AU has agreed to be fronting unanimous candidates to the UNSC as it pushes for reforms at the UN.

These agreed candidates are expected to act on behalf of Africa pushing one agenda.

Reforms at the UN

In January this year, the AU endorsed this stand through a communique where member states agreed to be jointly endorsing candidates from Africa.

Kenya has been pushing for UN reforms under the AU’s Common Africa Position.

The document says the AU demands full representation of Africa by having at least two permanent seats in the UNSC.

These seats should come with all the privileges and prerogatives of Permanent membership including the right of veto, according to the document.

Africa also wants five non-permanent seats at the UN since the continent is the recipient of most UNSC resolutions.

This subjective approach leaves Africa with no capacity to contribute to resolutions that affect it making the seat useless for the greater part.