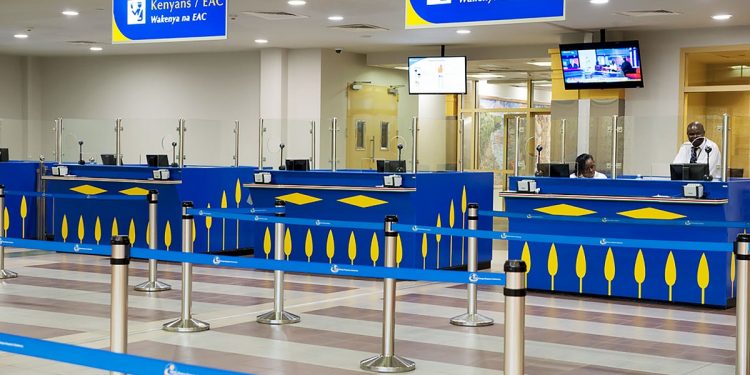 A section of the Jomo Kenyatta International Airport which is among the top 5 fastest growing airports in the world. Constrained liberalisation in Africa will wipe more than 50 million passengers off the continent’s air space market. [Photo/ Kenya Airports Authority]

by Njenga Hakeenah
in Africa, Aviation
0
Share on FacebookShare on LinkedIn

The economic benefits of managed migration in Africa could see the continent’s growth and development surpass expectations.

By boosting internal migration within the continent, the economic prospects could change. As more countries open their borders, this could tilt the economic scales in favour of trade brought about by the ease of cross border travel.

A United Nations Conference on Trade and Development (UNCTAD) report released in March this year noted that “Migration is about development, economic growth and human rights.”

Attempts to constrain liberalisation in Africa will wipe more than 50 million passengers off the continent’s forecast market size by 2038.

A rise in protectionist measures could curb the forecasted growth of Africa’s air transport market by about 50 million passengers over the next two decades, according to industry association IATA.

Speaking at Routes Africa 2019 in Mombasa, Kenya, Raphael Kuuchi, vice president of Africa at IATA, said that it is estimated that more than 300 million people will be travelling from, to, and within Africa by 2038.

“KAA has managed to meet and interact with over 30 Airports and Airlines. These potential new routes and partnerships,” said as he pledged his support for Pan-Africanism and liberation of African Skies.

The association’s forecast predicts that the size of the continent’s market will reach 356 million passengers if current regional and global economic trends continue.

However, a pick-up in protectionism could wipe more than 50 million off that total.

“Africa is forecast to be the second-fastest-growing region in the world over the next two decades, with growth of 4.5 per cent per year,” Kuuchi said.

“African airlines are going to add an additional 208 million passengers to the current total of about 140 million.

“However, if the signs we are seeing in markets such as the US and some European countries, where there are attempts to constrain liberalisation, are present here in Africa, then we would lose about 56 million passengers.”

Conversely, if there is an acceleration of growth, driven by policies including the Single African Air Transport Market, the African market in 20 years will be more than 400 million passengers in size.

UNCTAD Secretary-General Mukhisa Kituyi says that for a long time the narrative on African migrants has been driven by fear.

“Contrary to media projections, the largest movement of African migrants is within Africa. Migrants also make a very clear contribution to the economy of the country they move into,” Dr Kituyi said.

Speaking during the launch of the report advocating for the liberalisation of internal migration in Africa, Mukhisa said that such a move would boost development.

He called for a dialogue on how to lower such costs as an example of how to construct policies that can lower barriers for positive migration in Africa.

“Understanding migration is, therefore, important for the African Development Bank, because this work provides options to support programmes that will reduce migration flows at the same time as increasing yields,” said Charles Boamah, the AfDB’s Senior Vice-President who spoke during the third annual Africa Resilience Forum (ARF) advocating for the benefits that safe and controlled migration bring to countries of origin, transit and destination.

“This percentage rises to 80 per cent for sub-Saharan Africa,” he said.