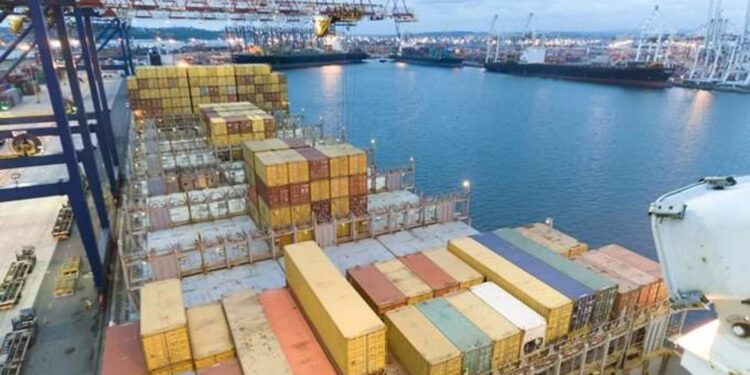 Developing nations saw trade in good expands in 2021 compared to developed nations, according to UNCTAD report.

by Padili Mikomangwa
in Africa, Industry and Trade
0
Share on FacebookShare on LinkedIn

Two years ago, COVID-19 put the global economy to the test. However—the uncertainty brought by the virus could not stop trade performance.

The economy is now catapulted by joint efforts of global economic communities to bring back certainty to economies. The International Monetary Fund (IMF) noted that the global economy is expected to moderate from 5.9 in 2021 to 4.4 per cent in 2022.

“Overall, the value of global trade reached a record level of $28.5 trillion 2021,” the report argued.  This is an increase of 25 per cent in 2020 and 13 per cent higher than 2019 before the COVID-19 pandemic struck (UNCTAD).  Further, the UNCTAD pointed out that while most global trade growth took hold during the first half of 2021, progress continued in the year’s second half.

“After a relatively slow third quarter, trade growth picked up again in the fourth quarter, when trade in goods increased by almost $200 billion, achieving a new record of $5.8 trillion,” UNCTAD noted.

Numbers from UNCTAD painted a more precise picture when it comes to global trade performance. The organization pointed out that trade in services rose by $50 billion to reach $1.6 trillion, just above pre-pandemic levels.

One of the most exciting situations in trade growth is the performance of developing countries. 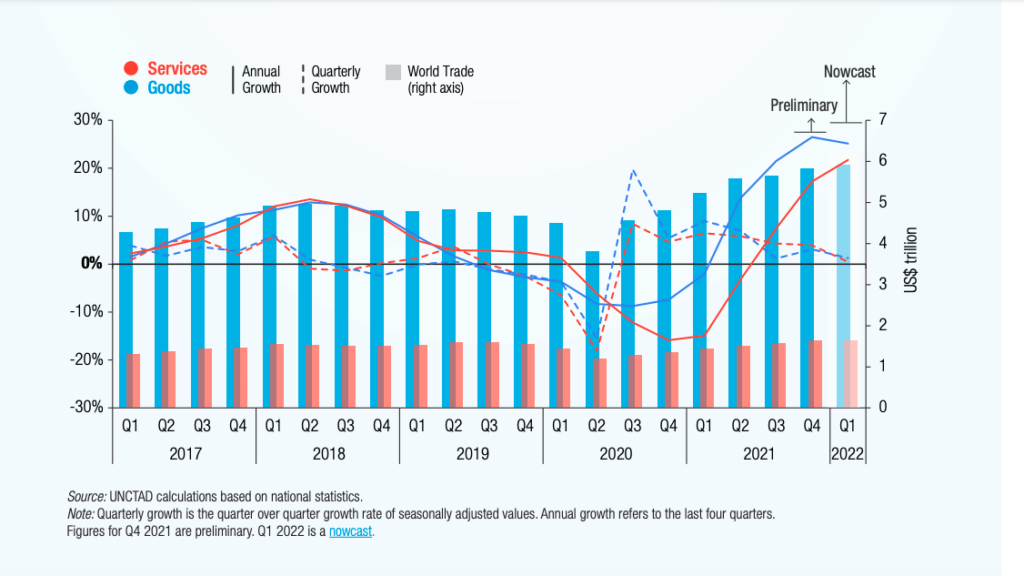 Growth in developing countries and sectors

UNCTAD argued that in the fourth quarter of 2021, all major trading economies saw imports and exports rise well above pre-pandemic levels of 2019.  Moreover, the report pointed out that trade in goods increased more strongly in developing countries than in developed ones.

It is essential to realize that Africa has more to tap into the intra-African trade, standing at around $21.9 billion, according to UNCTAD.

Further, exports of developing countries were about 30 per cent higher than during the same period in 2020, compared with 15 per cent for wealthier nations.

READ: The real impact of free trade in Africa

The growth of sectors was spread at least to all categories except transport equipment.

“High fuel prices are behind the strong increase in the value of trade of the energy sector”, the UNCTAD report noted.

Another crucial scenario to note from the report is that the significant shortage of semiconductors across the world resulted in the downplay of growth in communication equipment, road vehicles and precision instruments.

There is a flip side to analyze when it comes to the growth of the mentioned sectors. Despite the trend marked by the report, the African Continental Free Trade Area (ACFTA), has the potential to open up around 43 per cent of intra-African exports potential.

In this context, the continent stands to bring a competitive wave to the global trading stage against the backdrop of the AfCFTA. The removal of 97 per cent of import tariffs traded among African countries is argued to promote the manufacturing sector, improve job creation and social equity which have been argued to be a catalyst for sustainable development.

According to information from German news media Deutsche Welle (DW), African nations currently trade more internationally than with each other. Intra-African trade accounts for only 17 per cent of African exports, which is low compared to 59 per cent for Asia and 68 per cent for Europe.

In these recovery times, trade is essential for Africa’s innovation and productivity and the region cannot afford to miss any opportunity as it did before.

“In the pre-pandemic era, African trade in goods and services amounted to around 3 per cent of global exports and imports. In 2019, African countries recorded exports of $462 billion (€407 billion) and imports of $569 billion in merchandise trade. This constituted a fall of 3 per cent on average compared to 2018,” according to DW.

As new variants of the pandemic hit various areas of the world, economies from developing and developed regions are shielding their economies while embracing recovery.

But analysts forecast that it will be difficult for the region to handle uncertainties despite making gains in 2021.

However, the UNCTAD report indicates that trade growth will slow during the first quarter of 2022. The UN body noted that favourable growth rates are expected for trade in goods and services, although only marginally while keeping trade values at levels similar to the last three months of 2021.

READ: Agriculture as a vehicle for increasing women’s participation in global trade

“The positive trend for international trade in 2021 was largely the result of an increase in commodity prices, subsiding pandemic restrictions and a strong recovery in demand due to economic stimulus packages,” UNCTAD says.

On the other hand, the report argued that trade growth in 2022 is lower than expected “given the macroeconomic trends”.

Further, on the matter, the UNCTAD report depicted that logistic disruptions and rising energy prices contributed to highlighting the possibility of global trade being affected in 2022.

In this context, it is essential to look at developing economies such as Africa. In this context, Africa’s economic outlook is positive, with real GDP projected to grow 5.8 per cent in 2022, according to African Development Bank (AfDB).

Following that, the region can push towards the global stage as World Economic Forum (WEF) described that the sub-Saharan economy is expected to grow by 3.8 in 2022.

UNCTAD pointed out in the report that trade patterns in 2022 are expected to reflect the growing demand for environmentally sustainable products.