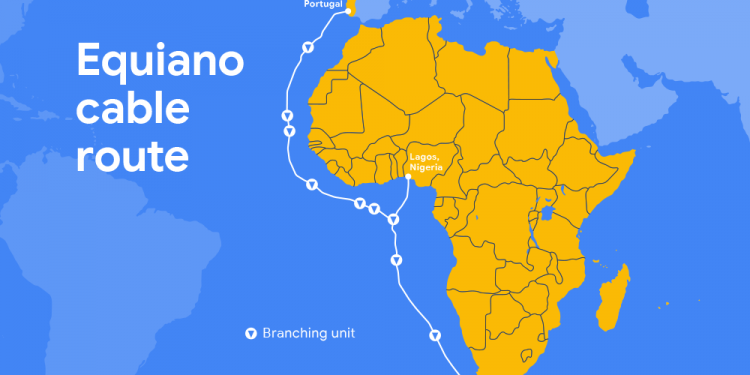 Equiano’s planned route and branching units, from which additional potential landings can be built. [Photo/Google]

American tech giants Google and Facebook are not providing internet in Africa as philanthropy but as a means of tapping business, the continent is so rich in.

With digitization bringing new opportunities to Africa, the continent is becoming the next frontier for Internet-based e-commerce solutions.

Across the continent, new digital businesses are emerging rapidly and growing fast.

The Free Basics platform in over 20 African countries was done in partnership with local telecoms operators.

It was hugely unpopular due to the restrictions.

On the other hand, Google has launched a free public Wi-Fi service in Lagos, Nigeria which is the largest internet market in Africa.

It is also testing Project Loon, solar-powered high-altitude balloons in a plan to beam internet to users in Kenya.

Africa is the world’s wealthiest continent in terms of natural resources and manpower.

Google and Facebook are promising to bring higher capacity cabling thus faster internet to the continent whose number of internet users is growing in leaps and bounds.

Africa recorded the highest growth in internet users globally between 2005 and 2018 and with this growth, the unlikely suitors want a piece of the internet cake.

By 2017, Africa had 21 million online shoppers and, “Turning this tremendous opportunity into inclusive development requires a massive effort on the part of all of us – in Africa and beyond,” according to UNCTAD Secretary-General Mukhisa Kituyi.

The two global tech giants are jumping into the African internet space despite privacy concerns raised against them.

Facebook was accused of supplying data to Cambridge Analytica which was used to sway the 2017 election outcome in Kenya, the U.S. presidential election and the Brexit referendum.

Google is accused of privacy intrusion in homes with their Nest spycam as reported by Forbes.

In Africa where data regulations are not as strict like in Europe, monied organisations can get away with almost everything.

Thus, the two giants are investing in the continent to make hay while the sun still shines.

Last week Google announced they were introducing Equiano, “our new private subsea cable that will connect Africa with Europe.”

The giant said that once complete, Equiano will start in Western Europe and run along the West Coast of Africa between Portugal and South Africa.

With branching units along the way that can be used to extend connectivity to additional African countries, the first branch is expected to land in Nigeria.

“This new cable is fully funded by Google, making it our third private international cable after Dunant and Curie, and our 14th subsea cable investment globally.”

Why the internet will be cheaper in Africa

Africa has experienced rapid growth in internet usage since 2005 despite the high cost of access. With a booming population that is largely youthful, a variety of providers will make internet on the continent more affordable.

With a young population that is good at bargain hunting, the entrance of Google and Facebook in the internet provision space will make force improved service delivery and fair costs by the established providers.

For providers who have been enjoying an almost monopolistic regime, the time to rethink the game is now.

In countries like Kenya where the internet has registered a boom, the likes of Safaricom have enjoyed their dominance making it almost impossible to reduce data costs.

In the East African region, one gigabyte (GB) of internet data service costs an average USD 4.90 according to the Alliance for Affordable Internet.

Uganda has the highest average reported price USD at 8.10 per GB while Kenya and Tanzania have similar prices at 4.81 and 4.40 USD per GB respectively.

Rwanda has the lowest reported average price at 2.32 USD per GB.

However, internet costs are slowly dropping in the EAC region with a 0.5 per cent relative to the average income in 2017 and by 3 per cent in 2016.

The Alliance for Affordable Internet is optimistic that as more efficient technology and more competitors enter these markets, the prices will fall more significantly.

The African continent’s youthful population represents a significant opportunity for these firms to provide people with their business.

As close as “Beginning in 2035, the number of young people reaching working age in Africa will exceed that of the rest of the world combined, and will continue every year for the rest of the century.”

With an expected population boom in Africa, there is a huge potential for those who can tap into the immense opportunities offered by this growth.

More than half of Africa’s population is without internet access. Just 24 per cent of the population is using the internet but this is a great leap from the 2.1 per cent internet connections 15 years ago.

With the growing numbers tilted in their favour, Google and Facebook are targeting hundreds of millions of people to use their internet services.

By making the internet more affordable, the tech giants will manage to enlist more users which is good for their advertising.

While it is not yet clear whether the two tech giants will partner with African telecoms operators, plans are already underway for laying the cables.

Facebook and Google have adopted local names for their cables.

The ‘Simba’ undersea cable by Facebook will circle Africa landing on various coasts.

Google’s first phase of ‘Equiano’ is due for completion by 2021. The cable running from Portugal to South Africa is said to have 20 times the capacity of the projects in the region. The first Equiano branch out will be in Nigeria.

Why Kenya will reap big from blue economy

How Kenya plans to save endangered Mountain Bongo