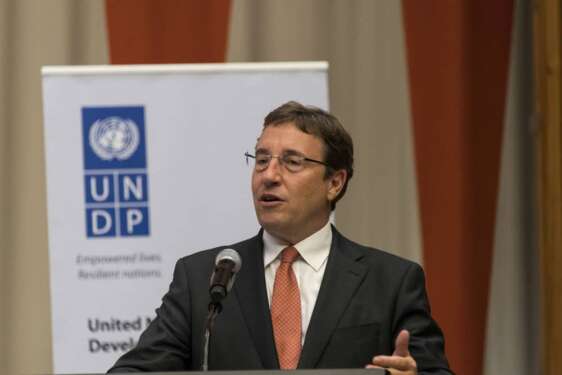 Within the context of SDG 17, support shall be extended to initiatives that bring governments, industry and citizens together around the use of ubiquitous, universally accessible, digital applications for travel screening, creating safe bubbles in cities, and supporting safe public health corridors.

The United Nations Development Programme (UNDP) has partnered with the PanaBIOS Consortium, represented by AfroChampions, to support the safe re-opening of Africa to travel and trade in the wake of the COVID-19 pandemic.

The “PanaBIOS-UNDP” Initiative involves a bridge to an international system called Global Haven at the base of which is a standardized and harmonized testing platform that enables international cross-border travel and trade, as well as business continuity in the face of health and similar catastrophes, thereby creating resilience into the future.

Since travel is highly international with intercontinental hubs tightly connected around the globe, the initiative anticipates the participation of many global actors within the Global Haven compact.

PanaBIOS and its promotion of trusted testing will play an important role in promoting the safe reopening of Africa to advance some of the objectives of enhanced intra African trade through the African Continental Free Trade Area (AfCFTA) – which is a key recovery stimulus from the ravaging impacts of COVID-19.

Also Read: The fate of African SMEs in the wake of AfCTA

Through the alliances fostered by the partnerships, the network will enable the use of tools such as digital testing certificates and vaccination e-certificates, often backed by machine learning and blockchain systems, to increase the capacity of governments to screen inbound travellers quickly, securely, efficiently, and in a manner that respects human dignity and rights.

The partnership will also seek to realize an international multi-stakeholder platform to disseminate technologies to help countries in Africa and around the world restore social life.

It is hoped that this platform will resonate globally by building on existing initiatives, such as the “Saving Lives, Economies, & Livelihoods” campaign launched by the African Union and spearheaded by the Africa Centres for Disease Control and Prevention (Africa CDC).

Within the context of SDG 17, support shall be extended to initiatives that bring governments, industry and citizens together around the use of ubiquitous, universally accessible, digital applications for travel screening, creating safe bubbles in cities, and supporting safe public health corridors.

These measures have considerably reduced the prospect of infection through a combination of testing, vaccination and the technological means to verify and ascertain negative infection status.
To ensure that such digital tools remain rights-compliant and empower citizens as “public digital goods”, UNDP will make a series of investments in standardization, public awareness, human rights compliance, government sensitization, and “algorithmic transparency”.

Recovery from the effects of the worldwide pandemic could be significantly accelerated if international travellers can be screened quickly and cost-effectively without the risk of fake and forged testing and vaccination certificates.

Achim Steiner, UNDP Administrator said: “One of the ways forward from the devastation wrought on the planet by the pandemic is for the global community to harness modern technology’s power to reimagine and transform partnerships for development.

Ahunna Eziakonwa, UNDP Assistant Administrator and Regional Director for Africa, said: “In its purest form, Global Haven is disruptive digitalization for good. Africa has blazed the trail in a way the rest of the world can take inspiration from.”

A principal element of the framework concerns how to coordinate public and private action in a harmonized and standardized way to accelerate the restoration and enhancement of the pre-pandemic world.

Global Haven’s use of technology-driven trust-based networks to enable people around the world to return to normal activities such as travel, and social outings.

Why Social Entrepreneurs are vital to build a sustainable, equitable and resilient Africa