Is Integration the Solution to Africa’s Stock Exchanges?

by Evelyn Shumba
in Africa, Business, Industry and Trade
0
Share on FacebookShare on LinkedIn

There are currently 29 exchanges in Africa; most of these are affiliated with the African Securities Exchanges Association. Included in the list of exchanges are two regional bourses. The Bourse Régionale des Valeurs Mobilières (BRVM) in Côte d’Ivoire which is an amalgamation of Benin, Burkina Faso, Guinea Bissau, Côte D’Ivoire, Mali, Niger, Senegal, and Togo.   The other is the Bourse Régionale Valeurs Mobilières D’afrique Centrale (BVMAC) which caters to Central African Republic, Chad, Democratic Republic of Congo, Equatorial Guinea and Gabon.

News out of East Africa indicated that countries except for Kenya are at very advanced stages of finalizing a regional exchange that will see Uganda, Tanzania, and Rwanda amalgamating into a single regional market.

African stock exchanges have generally been plagued by problems underlying their respective economies. They are usually characterized by their thin trading and a lack of depth and breadth.

The Role of Stock Exchanges

Stock exchanges have a crucial role to play with the capital market structures in pooling savings and channeling them into the sectors where they are most needed.  This they do by providing the means for enterprises to raise financing to target towards new business establishment and the expansion of existing operations.

In Africa particularly, this is a dire need in the face of the growing need for turnaround on the fortunes of the continent. Stock exchanges can provide the means by which government-owned enterprises can be privatized in order to improve their success. Various literature has argued that privatization serves to improve efficiency due to the profit motive as opposed to state-driven enterprises that are largely prone to a lack of accountability and lethargy.

A number of key areas such as telecommunications, electricity, and some branches of education can benefit from this privatization so as to enable funneling of government funds into key sectors such as health.

In addition, small to medium enterprises that are touted as the backbone of economies need avenues to raise much-needed capital for growth and expansion. Through stock exchanges, small businesses can manage to scale operations meaningfully. A lack of access to capital has been a major impediment to growth on the continent.

Some African companies have chosen to go the route of listing on stock exchanges outside of Africa as a means to bypass the weak African capital markets.

In recent years there has been a trend towards African startups listing on stock exchanges abroad. Companies such as Jumia listed on the New York Stock Exchange (NYSE) in 2019 and Interswitch which also made its debut on the London Stock Exchange (LSE) in the same year. According to the Centre for Strategic and International Studies, for Jumia, the NYSE offers the shortest route to the most capital. This speaks to an inadequate capital base on the African continent. 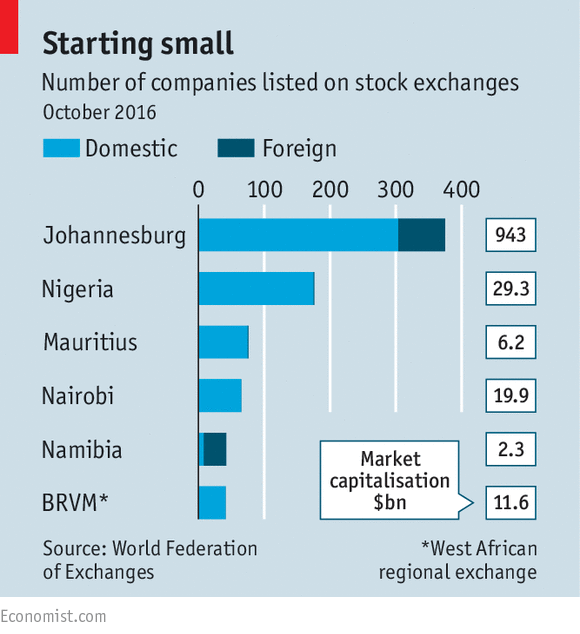 Is Integration The Solution?

Integration—both full and partial—has the potential to foster uniformity which would greatly reduce clearing and settlement time.

The East African stock exchanges have opted for full integration born out of the desire to increase liquidity, size of the market, lower costs, and transfer technologies and thus increase investor appetite for securities.

Full integration has the potential to achieve this, but the downside includes contagion risk in the event of a downturn in any one of the members. Further consolidation of legal and settlement mechanisms in the member countries is also a factor to consider.

A look at the integrated exchanges will reveal the problems associated with contagion risk. For example in 2010 in the face of political upheaval in the Ivory Coast, the BRVM suffered a dip which in effect, affected all the other countries.

Southern African countries, through the Committee of SADC Stock Exchanges (COSSE), have chosen instead to focus on partial integration with an emphasis on the transfer of ideas as well as cross-listings.

This partial consolidation means that the different countries are positioned to take advantage of the increased economies of scale and scope as well as the enlargement of market capacity and liquidity that comes from integration. However, it eliminates the risk of contagion which remains a critical challenge in light of political challenges that are wont to arise in Africa.

The case for full or partial integration remains inconclusive with each having its own merits and demerits. We wait to see the results of the capital markets in East Africa.

Some of the issues that affect capital markets in Africa are ingrained and cannot be presumed to be fixed by a simple netting of exchanges. Indeed structural problems exist which are a result of policy at government level.

The lack of transparency among other challenges facing the stock exchanges needs to be addressed at an all-inclusive stakeholder level. In Rwanda for example, national-level reforms and promotion of business interests have seen the stock markets progressing significantly.

Governments need to focus on enhancing the effectiveness of stock exchanges and removing barriers around investment attraction.

An all stakeholder involvement is necessary to spark the efficiency and smooth flow of capital into Africa. Integration—full or partial—is a necessity in allowing Africa’s inert potential to surge forth.