Nairobi is the leading Fintech ecosystem city in Africa according to the 2021 Global Fintech Rankings published on 8th July 2021 in which it jumped 26 places to the 37th position globally beating both Lagos and Accra[1]. Kenya’s President, His Excellency Uhuru Kenya stated at a UK summit that “Nairobi International Financial Centre (NIFC) has come of age to be the leading financial hub on the continent”[2]. Kenya is making a major incursion to position itself as the financial hub of Africa on the back of its fintech advantage as President Uhuru Kenyatta signed a $184 million deal with Dominic Raab, Secretary of State for Foreign, Commonwealth and Development Affairs and First Secretary of State of the UK during his three-day official visit to that country[3]. Kenya’s leadership of the Fintech world in African gives it the impetus to be an international financial hub but the realization of that requires Nairobi to implement critical reforms that would drive growth and attract the relevant actors.

Last month, I wrote about how Ghana is leading the charge in Africa when it comes to “Fintechs, SMEs and Digitization”[4] but as it turned out Kenya is the kingpin when it comes to Mobile Money.  87% of Kenya’s Gross Domestic Product (GDP) is held in transactions via mobile wallets and phones compared to 82% of Ghana’s GDP according to the Five Strategies for Mobile-Payment Banking in Africa report by Boston Consulting Group (BCG)[5]. The report found that after China, Kenya and Ghana have the second and third highest mobile payment usage in the world. The two countries accounted for a large chunk of the whopping $15T to $20T made in mobile transactions last year. According to Max Cuvellier of The Big Deal, Kenya also led in Africa VC funding in 2020 in terms of the per capita raised as depicted in the graph below.

Even though the World Bank recognized Ghana as the fastest-growing mobile money market in Africa over the last five years, I am focusing this essay on Kenya and the fintech city that is Nairobi. Next month I will focus on Lagos, Nigeria, followed by South Africa and then Cote d’Ivoire. This is an indirect way of taking the temperature of the KINGS countries I postulated in 2013 would be leading the digital economy in Africa[6]. I later doubled down in my 2016 book chapter under the auspices of “Digital Kenya – An Entrepreneurial Revolution in the making” edited by Dr. Bitange Ndemo and Dr. Tim Weiss[7].

Back in 2007, Kenya was no startup nation, it was one of the few countries in the world without a submarine fiber cable connecting it to the rest of the world. Submarine fiber cables provide high-speed backbone connection to the Internet. That year, Safaricom, introduced MPESA (Mobile PESA – PESA means money in Swahili) a mobile money innovation that allowed one to convert airtime value into electronic currency via a Short Messaging System (SMS)[8]. That same year, in the heat of the country’s election crisis, a Public-Private Partnership (PPP) was set up by Dr. Bitange Ndemo who was Permanent Secretary at the Ministry of Information and Communications Technology (MICT) to launch the first submarine fiber cable project under the auspices of The East Africa Marine Systems (TEAMS).  At the same time Erik Hersman, Ory Okolloh, Juliana Rotich and David Kobia joined forces to develop a platform to spot and report the election crisis and they called it Ushahidi which means “witness” in Swahili.

MPESA became popular during the election crisis because movement was restricted, banks were closed, and people needed an alternative way to transfer money. Since MPESA was the only option, this simple and unique innovation that originally started in Indonesia[9] took off and became very popular in Kenya. This was made possible by the no objection stances that the Central Bank of Kenya (CBK) took to the innovation because of the lobbying that came from Safaricom but most importantly the fortitude of government officials like Stephen Nduati Mwaura who is recognized as the Father of MPESA[10]. Mr. Mwaura was the leading official at the CBK who led the process to establish the no objection to MPESA.

Dr. Ndemo was the leading official at the MICT who lead the process for the establishment of the TEAMS submarine cable, in which I was an active participant, in 2007. The TEAMS cable went live in 2010 together with another private sector led cable SEACOM both built on the Open Access Model that I had developed with Russell Southwood and Anders Comstedt under the auspices of Spintrack AB for the WorldBank in 2005[11]. Mr. Mwaura is to MPESA what Dr. Ndemo is to TEAMS. MPESA is the foundation of Kenya’s fintech and TEAMS is one of the rails on which that fintech innovation rides into the global information superhighway.

Ushahidi was the third successful innovation from 2007 that had no government involvement except the grit and fortitude of Erik, Juliana, Ory and David who took it global[12]. Erik, Juliana, Ory and David needed a “home” for Ushahidi as they had to develop it from coffee shops around the city due to the absence of innovation hubs, so they decided to set up iHub (Innovation Hub) which was the first innovation hub in Kenya[13]. The success of MPESA, TEAMS, Ushahidi and iHub laid the foundation for Kenya becoming a startup nation (aka Silicon Savannah) and Nairobi a leading Fintech city. In 2015, President Obama brought the Global Entrepreneurship Summit to Nairobi in recognition of that[14]. Innovation hubs have become the new normal in Nairobi and have spread across the continent such that today there are about a thousand of them – these are the spaces in which digital innovations are being created.

Below are two of those fintech innovations that are making Nairobi the leading fintech city in Africa. 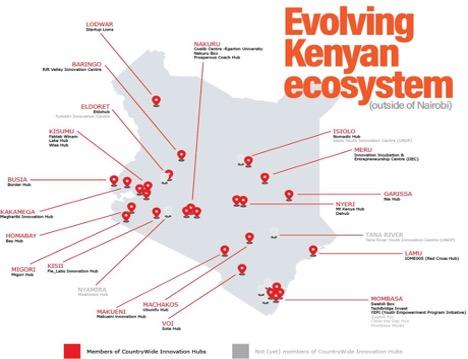 Cellulant is a leading Pan African fintech focusing on digital payments founded in 2002 by Ken Njoroge and Bolaji Akinboro – starting originally as a ringtone business. It has a payments platform called Tinng, which makes it easy for merchants and shoppers to collect and make payments with different localized payment methods in different countries. Cellulant boasts of offices in 18 countries, 35 partnerships with the largest mobile money operators across the continent and provides mobile banking and payments to 120 banks. It processed over $150m transactions valued at $8bn in 2020 and claims to process 12% of Africa’s digital payments[15]. After having raised a total of about $55m to date, Ken stepped down and a new generation led by Akshay Grover the current CEO has taken over the reins charting a new path for the future[16].

SaveApp is the latest fintech in the Nairobi ecosystem as it only launched its flagship product Ukonga on 1st September 2021[17]. Founded by Aziz Omar a second-time founder, SaveApp’s flagship product Ukonga allows you to round up your spare change at any transaction point and save it for the future. They have partnered with Octagon Africa, UBA and Naivas Supermarkets to make this a reality[18]. The savings culture in Africa is almost non-existent so the idea that Ukonga would enable the user to start saving at a push of a button is revolutionary in Africa. This innovation is not unique but the execution of it charts the path for Nairobi and Kenya to bring another world-class company to the global stage as the leading fintech city in Africa.