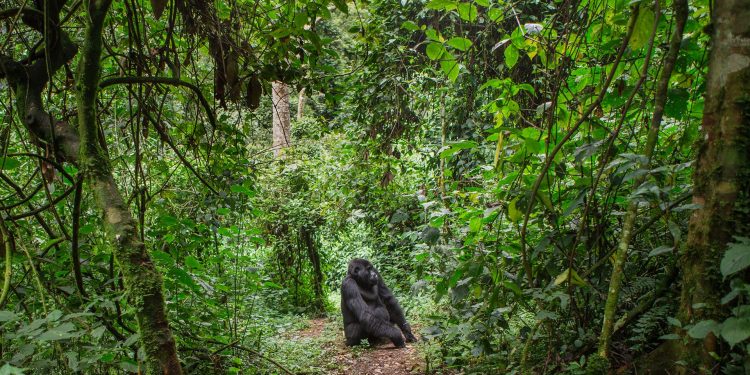 Unlocking the Promise of the Congo Basin for Africa’s Sustainable Future. [Photo/Encyclopedia Britannica]

Africa harbours the second-largest tropical rainforest in the world situated in the Congo Basin and known as the ‘lungs of Africa'.

by june njoroge
in Africa
0
Share on FacebookShare on LinkedIn

‘Forests and Sustainable Production and Protection’, was the theme for the recently passed 2022 International Forests Day, and could not have been timelier in light of the climate change crisis; spelt by the myriad natural disasters experienced globally. Forests make for a natural arsenal to combat the climate change crisis, whose deleterious manifestations have hitherto left no African nation unscathed.

Since its proclamation by the United Nations General Assembly (UNGA) in 2012, the International Day of Forests has been instrumental in not only raising awareness of the significance of all types of forests but also perpetuating efforts towards their protection and conservation thereof, in cognizance of their pivotal role in climate regulation especially in Africa, being one of the most vulnerable regions susceptible to the climate change crisis. This, despite its global low greenhouse gas emissions, which stand at a paltry 4%.

Read: 7 billion trees outside forests in Africa reported for the first time in new data survey

Africa harbours the second-largest tropical rainforest in the world after the Amazon in South America. Situated in the Congo Basin renowned as the ‘lungs of Africa’, covering 268 million hectares in Central Africa; a lush region filled with beautiful canopies, that is not only home to more than 10,000 species of tropical plants which cannot be found elsewhere in the world, but also to the world’s largest tropical peatland. Meandering through the basin is the Congo River, the earth’s second-largest river by volume, draining an area of 1.4 million square miles, providing water and life to the rainforest.

According to the World Wildlife Fund (WWF), the diverse flora and fauna including endangered species such as the lowland and mountain gorillas, chimpanzees, bonobos, forest elephants and okapis; that have been thriving in the dense intact forest landscapes and ecosystems, most of which have maintained their native biological diversity due to low human activity.

In addition, 700 species of fish, 1300 birds, 900 butterflies, 300 reptiles and over 400 other mammals inhabit the rainforest. The Basin also provides fresh water, food and shelter to more than 90 million people who live in the region and are dependent on the rainforest for their livelihood. In addition, it’s also home to nearly 150 distinct ethnic groups which translates to as many as two million indigenous people, interlinked to the rainforest and leading a hunter-gatherer lifestyle unperturbed by the modern world.

The Congo Basin spans six countries which include the Central African Republic, Cameroon, Gabon, Equatorial Guinea, Republic of Congo; but its biggest territory lies in the Democratic Republic of Congo (DRC), which boasts the largest forest cover with 107 million hectares, translating to about 60% of Central Africa’s lowland forest cover. Of utmost prominence is the fact that its ecosystem plays a pivotal role in climate mitigation, through the absorption of greenhouse gases and carbon storage in the soil and trees.

The tale of the Congo Basin is for the most part complex, beyond the shadow of a doubt, golden with perspective to its treasure trove in terms of natural resources. However, a somewhat ‘resource curse’ has stemmed from this endowment, given that the country has one of the poorest economies in the world, further fueled by corrupt governments and external interests.

Potential of the Congo Rainforests in Climate Change Mitigation

The Congo Basin wields carbon-rich ecosystems making it essential for the planet and all humanity, due to its unmatched carbon sink. In addition, two of the countries in the Basin, the Democratic Republic of Congo (DRC) and Congo (Brazzaville) are ranked among the world’s leading tropical peatlands, known as ‘Cuvette Centrale’ covering 145,000 square-kilometre area and believed to hold an equivalent of three years’ worth of global emissions. The peatlands are especially integral in biodiversity conservation and carbon sequestration.

Peatlands are the largest natural terrestrial carbon store and are vital for mitigating and preventing the tumultuous effects of climate change, minimizing flood risk and drought, biodiversity preservation, safeguarding water quality, preventing seawater intrusion and regulating water flows. Peatlands have been known to supply food, fibre and other local products that sustain economies. The Congo Basin is more resilient to climate change than the Amazon rainforest, with its tall trees soaking up some 1.2 billion tons of carbon dioxide each year.

Why is the Congo Rainforest in Peril?

According to the World Economic Forum, nearly half of the world’s rainforests have been destroyed; what once covered 14% of the earth, now covers only 6%. The Congo rainforest remains under massive threat and has been steadily disappearing at alarming rates. This has been ascribed to several factors and if the current trend holds, it’s predicted that the entire forest will be gone by the end of the century, according to a study published in 2018.

However, underpinning all these factors, the dominant force behind the destruction of the forest has been the systemic widespread poverty, with one out of six people living in extreme poverty and an estimated 73% of the Congolese population, living on less than $1.90 a day, according to a report by the World Bank.  DRC is known to harbour the third-largest population of the poor globally.

In credence to ‘desperate times calls for desperate measures and a drowning man clutches at a straw’; inhabitants have resolved to extract all economic opportunities the rainforest has to offer, which includes accepting bribes for detrimental activities such as logging, wildlife trade and mining. According to a study by the University of Maryland, published in the ‘Science Advances Journal’, between 2000 and 2014, the Congo Basin lost around 165,000 square kilometres of forest.

The greatest threats to the Congo rainforest include deforestation, charcoal production, plantations and industrial agriculture, industrial logging, wildlife trade, mining, petroleum exploration, exhaustive extraction activities, urbanization, road building and infrastructure. Currently, the global deforestation rate is around 10 million hectares a year, this would need to decrease by nearly a million hectares annually, to achieve the 2030 target to end deforestation. Industrial plantations have been taking root in the Basin, pertinently of palm oil, rubber and sugar production. Small-scale subsistence agriculture has led to record-breaking forest loss between 2000 and 2014 of a notable 93%.

The major driver of forest degradation has been industrial logging by large multinational companies, due to its preferred good quality. Consequently, this has opened up dense areas of the forests, birthing and nurturing a poaching epidemic which has led to the loss of wildlife and biodiversity that has for instance seen the forest population dwindle by 60%, in less than a decade. In addition, it has paved the way for the conversion to large-scale agriculture. Since 2002, DRC has had a moratorium on new logging concessions on an estimated 70 million hectares of forested lands.

Mining companies have exacerbated the forest destruction, as large parts of it have been cleared for this purpose. According to the Global Forest Watch, 590,000 hectares were lost, an area estimated to be more than the size of Jamaica. In 2021, DRC’s biggest province Tshopo lost 12,000 hectares of intact forests to fires.

Most citizens survive by practising ‘shifting cultivation’ whereby they carve farmland out of the forest. However, this has over time depleted soil nutrients, which leads to its abandonment whereupon a new area is picked and planted. Civil wars and ethnic conflicts have further led to the destruction of the rainforest; coupled with wood extraction for domestic fuel or charcoal production.

Saving the Congo Rainforest for the Planet’s Benefit

Inarguably, urgent action is required to sustainably manage, protect and restore the Congo rainforests, for not only Africa’s sustainable future but the entire planet. Degrading activities need to be brought to an abrupt halt such as deforestation, clearing land for agricultural conversion, logging and mining. By the same token, harsh penalties need to be imposed on culprits of forest degradation, albeit most have influence and power, they also need to be held accountable.

Finance mobilization and inclusion of the private sector, together with the public are critical to expediting conservation efforts. The recent agreement between DRC and the Central African Forest Initiative (CAFI), to mobilize $500 million in funding for forest protection between 2021 and 2031, could not be more promising to ramp up conservation efforts. Clear and ambitious targets need to be formulated, for instance, UNEP and FAO have already committed to several goals, resolutions and strategic actions.

Furthermore, in 2021, the Republic of Congo signed a landmark agreement with the World Bank’s Forest Carbon Partnership Facility (FCPF), to unlock US$41.8 million for reducing emissions from deforestation and forest degradation and increasing carbon sequestration, popularly known as REDD++ (Reducing Emissions from Deforestation and Forest Degradation) activities. The Emission Reduction Payment Agreement (ERPA), is committed to rewarding efforts to reduce 8.4 million tons of carbon emissions through 2025, under the country’s ambitious emissions reductions program.

Similarly, the 2021 COP 26 Conference, unveiled two climate finance flows towards the conservation of the Congo Basin, the US, UK and the Bezos Earth Fund demonstrated their commitment to the preservation of Congo rainforests; by announcing a collective contribution of at least $1.5 billion in funding between 2021 and 2025. This is aimed toward the protection and maintenance of the rainforests and other carbon reserves essential to the planet.

Engaging and supporting local communities to sustainably manage peatlands, in cognizance of their rights as traditional dwellers of the forests need to be upheld. This way, sustainable agriculture will be practised devoid of converting any forested areas, rather than degraded or non-forested land. Adaptation and implementation of tenure law and policy, strategic alignment of incentives coupled with transparency by forest protection actors is additionally vital. In the bargain, strong monitoring and accounting systems need to be established, together with the promotion of multi-stakeholder forums. Countries in the Basin need to formulate and strictly adhere to their respective Nationally Determined Contributions (NDCs), as enumerated in the 2015 Paris Agreement to back up conservation efforts.