Equity Group has announced a 98 percent growth in half year profits to Sh17.9 billion up from Sh9.1 billion registered the previous year. 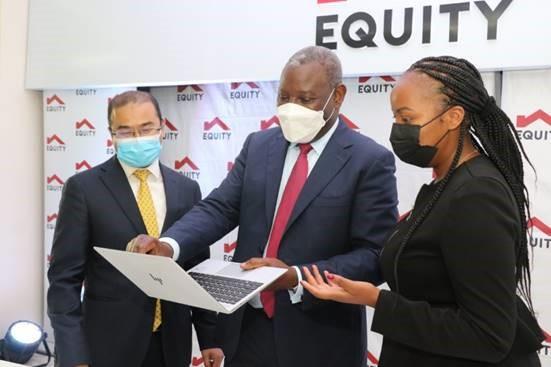 Regional bank Equity Group Holdings has announced a 98 percent growth in half year profits to Sh17.9 billion up from Sh9.1 billion registered the previous year.

The Group’s Managing Director and CEO Dr James Mwangi said attributed improved performance to the defensive and offensive strategy, which they adopted at the onset of the COVID-19 pandemic.

“The defensive approach focused on high asset quality, strong capital and liquidity buffers that saw the Group present a strong non-performing loans (NPL) coverage of 92 percent up from 73 percent the previous year attributed to a decline in gross non-performing loans by Sh1.3 billion from Sh61.2 billion to Sh59.9 billion.

Loan loss provision declined by 66 percent from Sh7.7 billion to Sh2.6 billion to register cost of risk of 1.2 percent down from 4.2 percent.

During the six months period, net non- performing loans declined by Sh5.4 billion from Sh28.3 billion to Sh22.9 billion due to the aggressive provisioning the previous year under the defensive strategy.

Only Sh64 billion remains under COVID-19 moratorium constituting only 11 percent of the entire loan book.

During the period under review, total operating costs grew by 4 percent to Sh27.8 billion against a 33 percent growth in total income to Sh51.6 billion driving profit before tax up to Sh23.8 billion up from Sh12 billion
a growth of 99 percent.

Efficiency gains saw Cost Income Ratio decline marginally to 48.5 percent from 48.8 percent driven by a reduction of cost of funds to 2.6 percent down from 2.9 percent.

Liquidity buffers saw cash and cash equivalent register a growth of 154 percent to Sh219.5 billion
up from Sh86.6 billion with Liquidity Ratios rising to 62.4 percent up from 54.2 percent with Loan to Deposit Ratio declining to 61.5 percent down from 72 percent.

“The strong capital and liquidity ratios have positioned the Group well for continued execution of the
offensive strategy particularly in light of improving asset quality and operational efficiency and an
improving operating environment,” added Dr. Mwangi.

Mwangi said that the regional approach with Kenya now being only 60 percent of the Group balance sheet mitigates national shocks and sovereign risks.

“Group efficiencies shared with the subsidiaries are quickly translating regional growth to value creative growth, with majority of the regional subsidiaries Return on Average Equity being higher than their cost of capital.”