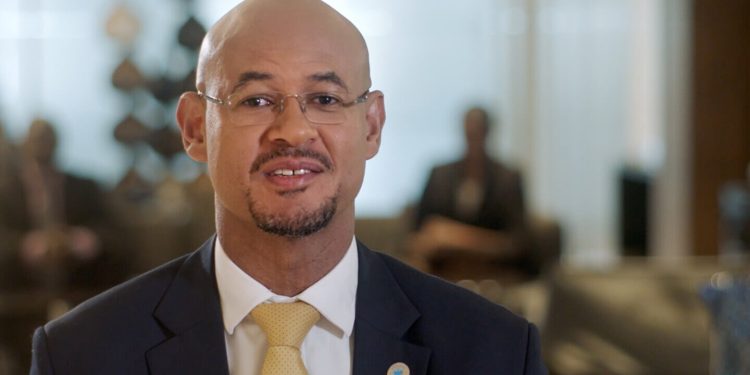 Mr. Awori was named CEO of Ecobank on Monday, with current CEO Ade Ayeyemi poised to leave the bank after reaching the retirement age of 60.

Jeremy Awori, the outgoing CEO of Absa Bank Kenya, has been named the next CEO of pan-African lender Ecobank Group, ahead of his formal departure from Absa at the end of October.

Awori was named CEO of Ecobank on Monday, with current CEO Ade Ayeyemi poised to leave the bank after reaching the retirement age of 60.

Ayeyemi has been the CEO of Ecobank for seven years.

“Ecobank Transnational Incorporated (ETI), the holding company of Ecobank Group, today stated that Ade Ayeyemi, the current Group CEO, will retire when he reaches the age of 60, in compliance with ETI policy. The board of directors has chosen Jeremy Awori to replace Ayeyemi as Group CEO, and the appropriate dates will be disclosed in due time,” according to a statement from the bank.

It is present in 35 countries.

Ecobank, based in Lome, Togo, operates in 35 Sub-Saharan African nations.

“It is an honour to be named Ecobank Group’s CEO, and I look forward to solidifying Ecobank’s transformation whilst innovating to deliver value for all Ecobank’s stakeholders,” Mr Awori stated upon his appointment.

Absa said last week that the experienced banker would leave the institution at the end of October after nearly ten years at the helm.

Since he was appointed CEO of Absa in February 2013, he has led the lender’s seamless transition from Barclays Bank Kenya.

“I am delighted to have led Absa Kenya to great commercial milestones while making a contribution to our society over the last decade. I am optimistic that Absa will reach greater heights in the future,” Awori remarked upon leaving Absa.

Awori also served as the Kenya Bankers Association’s chairman for a year, from June 2013 to July 2014.

Before being appointed as Absa’s Chief Executive Officer, he was the CEO of Standard Chartered Tanzania from 2008 to 2013, rising from the bank’s sales director of Middle East, South Asia and Africa.

Following a year in which its net earnings increased by 161% over the previous year, the Nairobi Securities Exchange-listed institution reintroduced dividend payments of Sh5.9 billion.

Awori successfully led the bank’s departure from Barclays in 2020, spending substantially on revamping its colours and brand identity.

This comes after UK lender Barclays Plc lowered its stake in Absa’s parent company, Absa Group, from a dominant 62.3 per cent to a minority 14.9% in 2017, resulting in a rebranding of all the Group’s African subsidiaries.

Following the departure of long-serving KCB CEO Joshua Oigara in May, Absa became the second tier-1 lender to see a leadership transition this year. Awori and Oigara, appointed to their respective positions just a month apart in 2013, are also leaving just four months after nearly ten years at the two listed lenders.

Oigara was succeeded by Paul Russo, the managing director of KCB’s subsidiary National Bank of Kenya and the Group’s regional business director.

Read: Ecobank named the Most Innovative Bank in Africa

Google US$3.9 million fund for tech startups to export technologies

World Bank says global economy in danger, is it?