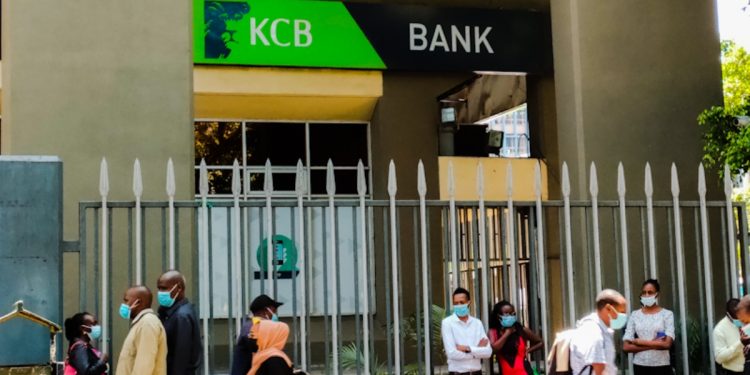 by Wanjiku Njugunah
in Banking
0
Share on FacebookShare on LinkedIn

Kenya Commercial Bank (KCB Group) has reported a 54.6 per cent rise in net profit for the quarter ending in March 2022 to hit KSh 9.9 billion.

According to the company, the rise from KSh 6.4 billion in a similar period last year was boosted by growth in total income and a reduction in loan loss provision.

During the period, revenues increased by 26 per cent to KSh 29.0 billion on account of an increase in interest income, an increase in non-funded income from lending activities and service fees and a 21.1 per cent rise in earning assets.

Oigara noted that the group’s relentless focus on its strategy had enabled the bank to maintain robust asset growth and deliver a healthy return on its investments.

“We have effectively demonstrated our combined abilities and competencies in managing and responding to the impact of the healthcare crisis across all our markets,” Oigara said.

During the quarter, net interest income grew by 18 per cent to KSh 19.7 billion, driven by an increase in net loans and advances coupled with growth in investments in Government securities. This was partially offset by an increase in interest expenses occasioned by tight market liquidity.

Non-funded income (NFI) grew by 47.2 per cent to KSh 9.3 billion. This was driven by additional disbursements during the period, which increased lending fees by 73 per cent.

The resumption of economic activities across most sectors led to the growth of KCB’s non-branch transaction numbers, which surged by 70 per cent while branch transactions grew by 16 per cent to drive overall service income up 35 per cent.

The other non-funded income streams were equally strong, with FX income growing 46 per cent, trading income up 82 per cent and other income up 16 per cent. From this performance, the group was able to register a 32 per cent NFI to total income ratio.

Provisions decreased by 27.5 per cent from a similar period last year largely due to a drop in corporate and digital lending impairment charges after COVID-19 related provisions were recognised in the full year of 2021. The non-performing book continued to come under pressure due to slow recovery in the construction, hospitality and part of the manufacturing sectors causing deterioration from 14.8 per cent to 17 per cent.

The group’s balance sheet expanded by 19.3 per cent to KSh 1.2 trillion, driven by organic growth across the business and the consolidation of BPR.

Customer deposits increased to KSh 845.8 billion, registering a 12.9 per cent growth driven by a proactive deposit mobilisation strategy across our markets. These deposits were utilised to fund net loans and advances, which went up 18 per cent largely on account of improved corporate and retail lending to close the period at KSh 704.4 billion. The group’s participation in Government securities recorded an increase of 32.6 per cent from KSh 212.5 billion to KSh 281.8 billion during the same period.

Shareholders’ funds grew 23.3 per cent to KSh 181.8 billion on improved profitability for the period.

KCB Group Chairman Andrew Wambari Kairu said the group remains optimistic about improved business growth in the remaining part of the year as economic fundamentals improve in the East African economy. This is despite global threats and other local developments including the upcoming General Elections in Kenya.

“Our priority is to harness economic drivers to accelerate the pace of recovery and growth,” he said.