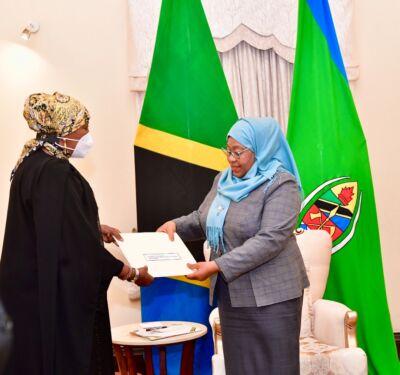 Bilateral ties between Kenya and Tanzania have been blowing hot and cold for decades now, with the row playing out publicly during the era of the late President John Pombe Magufuli.

Disputes seem to be always never far from the surface and only a slight spark is enough to ignite a diplomatic tiff such as the one that was playing out during Magufuli’s era.

However, President Samia is seeking to bring a solution, and maintain a good relationship between the two neighbouring countries.

President Samia on Saturday, April 10, 2021, said that her administration is determined to solve some of the issues existing between Tanzania and Kenya.

The Tanzanian head of state said this in a statement to the media after meeting a special envoy from President Uhuru Kenyatta of Kenya. She said that she will pick from where her predecessor the late Magufuli left.

At the same time, Suluhu directed the Joint Permanent Commission (JPC) between the two countries to meet and come up with plans that can strengthen the Tanzania-Kenya relations.

The commission met for the last time in 2016.

Uhuru’s message to his counterpart was delivered by the Sports CS Amb. Amina Muhamed.

In his message, Uhuru assured Suluhu that Kenya is ready for a bilateral talk that will strengthen the bond between them.

Uhuru has also invited Suluhu to make her first visit to Kenya as the president.

CS Amina and Kenyan Ambassador to Tanzania Dan Kazungu were received by President Suluhu at the State House in Dar es Salaam, Tanzania. 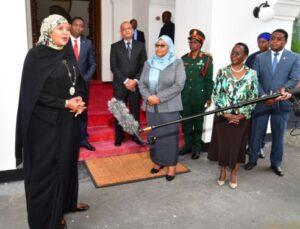 Suluhu was sworn in last month, becoming the first female president in Tanzania.

The 61-year-old leader promised Tanzanians that she will fit into Magufuli’s shoes and that there was no reason to worry.

She served as the Vice President during Magufuli’s first and second terms as president.

There is already a lot of trade between the two countries and this can only be enhanced when bilateral ties are cultivated and bolstered.

It’s time to look for permanent solutions to this circus of a standoff, which President Samia has already proved to be working on.

The relations need to be reset in a way that will bring more benefits to the citizens of the two countries and beyond.

Kenya’s uneasy relationship with Tanzania was already threatening to degenerate into a trade war during Magufuli’s era, with Dar es Salaam banning three Nairobi airlines from its airspace last year.

The new round of feud was apparently triggered by Kenya’s move to exclude Tanzanians from travellers exempted from mandatory Covid-19 quarantine protocol.

Kenya’s action was motivated by the fact that Tanzania has been lax in the fight against Covid-19, and has not instituted restrictive measures to curb the spread of the disease.

Piqued by Kenya’s move, Tanzania retaliated by pulling the plug on the three airlines, raising the list of barred operators to four, including Kenya Airways.

Diplomatic rows are a usual occurrence among nations, and especially so among neighbouring countries, as differences will always emerge.

However, when feuds become as frequent as it has been the case between Nairobi and Dar, it becomes a source of concern that demands a comprehensive solution.

The simmering differences and political grandstanding between them had resulted in a cold war stance that has hurt ease of doing business within the East African Community (EAC).

Such constant spats are inimical to EAC’s vision of a region working in tandem to grow economies, foster a favourable investment environment, and ultimately improve the living standards of the people.

Just a few weeks after taking over power, she has proved to the world to be determined to be seeking a new era for East Africa.

President Samia is expected in Uganda for talks that should culminate into the signing of oil deals on Sunday 11, according to a top official from the Ministry of Foreign Affairs.

Her visit could see the long wait for Uganda’s final Investment Decision for oil and gas end.

This is President Suluhu’s first state visit since her elevation to replace the late John Pombe Magufuli, as the president of Tanzania last month.

The late Magufuli was due in Kampala on March 22 for the three-way signing of the crude oil export pipeline deal between the governments of Uganda and Tanzania and the French oil giant Total, the lead investor. However, he died a week before the due date.