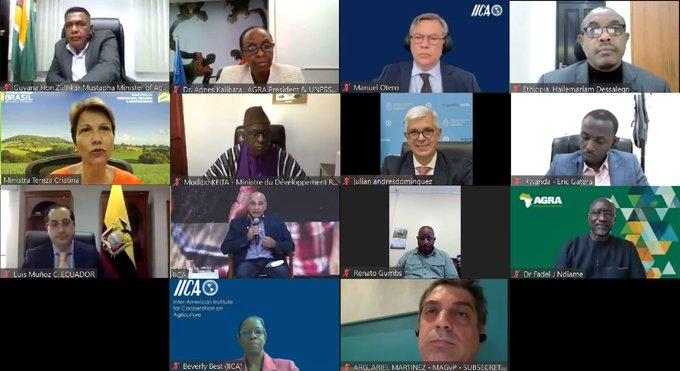 The meeting participants agreed to hold a broader ministerial summit between the two continents later this year, focusing on innovation issues. Photo: IICA

Agriculture Ministers commit to focus on innovation, profitability of farmers

Ministers of Agriculture from Africa and America meet and committed to working together to develop a cooperation agenda and agreed that the two continents face common challenges and opportunities regarding transforming their agri-food systems to make them more sustainable and inclusive.

The agreement was reached during the First High-Level Roundtable between Africa and the Americas, convened and organised by the Alliance for a Green Revolution in Africa (AGRA) and the Inter-American Institute for Cooperation on Agriculture (IICA), entitled “Building Bridges for Future Cooperation in Agrifood Systems”.

The high-ranking officials who took part in the virtual event agreed that, beyond the cultural and historical similarities and differences between the Americas and Africa, the continents face a unique and common challenge: that of building knowledge-intensive agriculture, with a human face, while caring for the environment and considering the areas of nutrition and health, which, they agreed, is necessary in order to produce more and higher quality food.

They agreed to develop agendas throughout the year to link technical assistance institutions for agriculture – such as Brazil’s Embrapa, Argentina’s INTA and all national research organisations in Latin America and the Caribbean, which play a key role – and their scientists and professionals, in order to deepen exchanges. They also proposed holding a ministerial summit on agriculture in Africa and the Americas in the second half of 2022.

Among the participants were Agnes Kalibata, former Minister of Agriculture of Rwanda, the UN Secretary-General’s Special Envoy to the 2021 Food Systems Summit and President of AGRA; Hailemariam Desalegn and former Prime Minister of the Republic of Ethiopia.

The meeting participants agreed to hold a broader ministerial summit between the two continents later this year, focusing on innovation issues – repeatedly mentioned at the roundtable – that are essential to increase the productivity and sustainability of agri-food systems, such as digital agriculture and biotechnology research.

Other topics of common interest that emerged from the debate were the recovery of degraded soils, efficient water management and the promotion of more open, fairer and more transparent international food trade.

The initiative to bring the Americas and Africa closer together arose during the extensive preparatory process for the Food Systems Summit held last September, explained Agnes Kalibata, who was the main facilitator of the global event held in New York.

“I wish to thank Manuel Otero for building bridges between the two continents, because, from the perspective of South-South Cooperation, we face common challenges. I have visited Brazil and other Latin American countries and I am certain that we must learn from them. I am impressed by the progress Latin America has achieved in scientific research and trade,” stated Kalibata.

“The Summit”, she added, “provided us with the opportunity to bring these continents together to take advantage of the best they offer. This is the perfect time to engage in South-South Cooperation and to learn from each other. We are going to show that international cooperation can help us feed more people and take better care of our planet by being responsible producers. This meeting serves as a launchpad for a series of commitments”.

Minister Tereza Cristina agreed that there is room to engage in valuable cooperation between the two continents. “It is crucial to simultaneously address agriculture and food security, as well as to reflect on free and fair agricultural trade and sustainability,” she said.

The Brazilian Minister of Agriculture associated the sustainability of agri-food systems with the need for international agricultural trade to be transparent and fair. She was also critical of the “protectionism of developed countries, which has hindered the capacity of developing countries to merge more modern and dynamic food production”.

Tereza Cristina also warned that developed countries must acknowledge the fact that there is no single path towards sustainability and must respect the principle of common but differentiated responsibilities regarding climate change mitigation policies.

Former Ethiopian Premier Desalegn noted that, with support from Brazil, his country has achieved positive results in the fight against hunger, and revealed that African countries are eager to exchange experiences with Latin America and Caribbean nations.

“African economies have grown in recent decades, as have their agrifood systems, despite catastrophes such as droughts and floods and, most recently, the Covid-19 pandemic. As a region, Africa lacks access to modern technologies and mechanised tools that allow for increasing product variety and quality and expanding the percentage of arable land. Many of our farmers are still subsistence farmers; therefore, cooperating with Latin America and the Caribbean will enable us to improve the lives of our populations”, he said.

Speaking on behalf of the countries of the Caribbean Community (CARICOM), Zulfikar Mustapha pointed out that one of the common challenges facing subregion and African nations is their vulnerability to natural disasters due to climate change. “We can achieve positive results by working together on issues of common interest, one of the first of which is resilience”.

Argentina is one of the Latin American countries that has been working closely with different African nations on issues such as biotechnology transfer – an area in which Argentina is recognised worldwide –, bioeconomy and development of dairy products and different crops, informed Minister Julián Domínguez.

“This partnership between IICA and AGRA provides us with the opportunity to deepen our joint work. We are very interested in learning from the region and in sharing the technologies we have been developing”, he added.

Minister Alvarado considered that Latin America the Caribbean and Africa must work together to drive transformations that would enable farmers to receive a fair price for their efforts, describing this as a priority issue.

“We cannot continue to set prices that are below the cost of production. It is imperative that we adjust the prices of agricultural production, considering the global increase in the prices of raw materials and transportation. Family farmers cannot be subsistence farmers; they may well-being”.

Along the same lines, the Minister of Rural Development of Mali, Modibo Keita, called for establishing “better linkages between producers and the market”, which would generate greater profitability for farmers.

Keita revealed that the primary concern in his country is scarce rainfall because of climate change and the challenges that this scenario presents for the sustainability of agricultural production.

The Director of Agriculture of Saint Vincent and the Grenadines, Renato Gumbs, considered that trade is the issue that unites the two continents. “We must expand our network of partners”, he said.

Speaking from Rwanda, Eric Gatera described the efforts the African country is undertaking to attract youth to agriculture. “To succeed, we must offer benefits and an improvement in terms of social status, because the agriculture sector is not appealing to young people”.

From Ecuador, Yomira Paz reported that her country is implementing cross-cutting climate change adaptation measures with a gender focus.

The Director-General of IICA underscored the need for more and better international cooperation given the complexities of the current global scenario. “No country will emerge from this crisis on its own. We must stand together to address issues of a cross-cutting nature. Everything makes more sense if we build bridges. And that is exactly what IICA is doing: building bridges between stakeholders, countries, subregions and also with other continents”, noted Otero.

“The Summit”, he added, “pushed agriculture to the top of the global agenda, and it is our responsibility to ensure that it remains a priority. We must transform our consensus into actions that can transform the quality of life in rural areas, improve farmers’ profitability and drive sustainable practices. We need more South-South cooperation. I hope that we can advance towards a shared vision and a common agenda”.