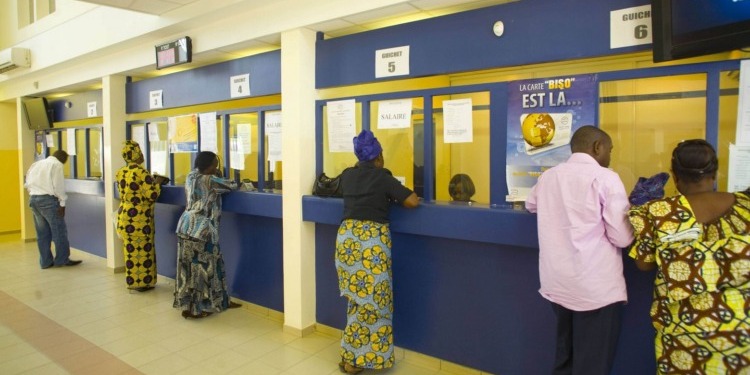 Customers in a banking hall. Traditional banks in Africa can still have an advantage in the ongoing fintech revolution. [Photo/ID4D]

The potential that investors and founders are looking for is to bring substantial swathes of Africa's unbanked population online.

by Njenga Hakeenah
in Business, Tech & Business
0
Share on FacebookShare on LinkedIn

Africa is experiencing a fintech revolution where hundreds of start-ups are connecting millions of Africans to financial services.

This has become possible largely because of venture money and advances in mobile internet.

The opportunity for fintech is derived in part from failure by the main local financial companies to grow payment products to the masses over time. That does not, however, render Africa’s financial institutions impotent in the face of the start-up upheaval.

Africa’s existing commercial banks may gain an advantage over VC-backed businesses in the continent’s digital finance revolution with the appropriate mix of innovation and collaborations.

The latest report in CR2’s Market Insight series shows that a massive mobilization of venture capital toward Africa is fueling that change. The majority of this funding, roughly 50 per cent annually, is going to fintech startups. Venture capital expenditure on the continent increased from US$400 million in 2015 to US$1 billion in 2018 and is expected to exceed US$2 billion by 2021.

These figures place Africa among the world’s fastest-growing tech countries in terms of VC growth year over year. In Silicon Valley, these figures represent a day and a week.

The potential that investors and founders are looking for is to bring substantial swathes of Africa’s unbanked population online.

According to numerous estimates, including The Global Findex Database, Africa has the highest percentage of unbanked people in the world, as well as a considerable number of underbanked SMEs and consumers.

In this regard, the continent offers savvy financial players a win-win situation. Those who identify product-market fit can increase revenue streams from online payment products while also helping 1.2 billion individuals in 54 countries gain access to financial services.

There is compelling evidence that phone apps can be used to scale financial services across Africa thanks to the growth of M-Pesa in Kenya.  As a result of the 2007 launch of Safaricom’s P2P payment system, Kenya now has one of the world’s highest rates of mobile money penetration, with over 20 million users and billions in annual transactions.

M-Pesa was not a VC-backed project, but investors and prospective entrepreneurs were aware of its potential.

Some of Africa’s largest economies and populations have seen a surge in the number of start-ups developing app-based payment platforms over the past decade. African payments businesses have recently made news around the world because of their impressive customer bases.

As of 2018, Chipper Cash had 3 million users, 80,000 transactions each day, and a monthly payment value of US$100 million in Africa’s digital payments market.

The acquisition of Nigerian fintech Paystack by US payment giant Stripe in 2020 confirmed the potential of Africa’s digital finance sector and the value of start-ups to reach it.

Visa and PayPal, two other major global banking institutions, have partnered with young African start-ups backed by venture capital to extend their operations throughout the continent.

In terms of increasing online payment use, start-ups aren’t the only participants in Europe. New digital finance services from established African banks are also taking advantage of their existing infrastructure and client base.

The report notes that financial institutions in Africa are embracing new technology, such as online wallets and digital payment services, in order to reach the unbanked and meet the needs of an on-demand population. With their longstanding client bases and more defined regulatory frameworks, established African banks are critical to the continent’s innovation development.

However, the continent’s banks should not go on this path alone. They may speed up their path to success by working with fintech start-ups and technology partners. A growing number of case studies show this to be the case.

The Amole digital wallet was created in 2018 by Ethiopia’s Dashen Bank and Addis Ababa-based Fintech Moneta Technologies, based on CR2’s digital banking technology.

A wide range of services and payments are now available to Ethiopians through Amole, which was launched in 2012. This expansion of payment and money transfer alternatives in Ethiopia, Africa’s 7th largest economy and second-largest population, also included Person-to-Person (P2P), QR codes and card payments.

Amole, Ethiopia’s leading cashless payment network, has more than 3 million registered users and is helping the country move toward a cashless society. African governments made initiatives to shift more transactions away from cash to contactless mobile payment options following the Covid-19 issue, including Nigeria, Kenya, and South Africa.

Some traditional banks appear to be missing the opportunity to embrace digital finance in Africa. It has been found that African payments start-ups are leading the charge on new product releases and client acquisition, on the strength of acquiring funds at a rapid rate.

An additional TechCabal story stated that a client exodus had occurred due to product and service issues with digital banking apps brought out by two of Nigeria’s most well-known banks, notes the report.

It adds that an example of this contrast was Kudabank, which had grown its customer base in Nigeria from 300,000 to 1.4 million over the course of three years. It is imperative that traditional African banks pursue the correct product innovation in order to meet the moment and hedge against disruption.

Fintech startups in Africa will benefit only if the trust customers place in traditional banks continues growing.  Nigeria, Africa’s most populous country, is a good example of a country that obtains the most venture capital funding for start-ups.

Some 67 per cent of Nigerian bank clients still trust their banks more than they do fintech, according to a 2020 study and poll by McKinsey Consulting.

There was still a degree of reluctance among consumers in the country to switch to fintech goods, according to a study.

Mobile money rules are very new in Nigeria, thus some of this may be due to consumers’ familiarity with the country’s lengthy regulations and deposit guarantees for traditional banks. Access and convenience play a major role in Nigerian customers’ acceptance of fintech goods, but trust is a factor that offers banks an advantage over their competitors.

To put it another way, this all points to the importance of traditional banks in Africa’s digital transition. There is little doubt that Africa, a continent ripe for digital transformation, is experiencing a rush of startup-driven financial activity right now.

Africa’s banks, on the other hand, have a lot to gain from this pivotal time. Traditional financial institutions must adapt by collaborating with digital banking platform partners to provide new offerings.

In Africa’s 21st-century fintech market, banks that combine their customer trust advantage with new product and platform innovation are likely to succeed.