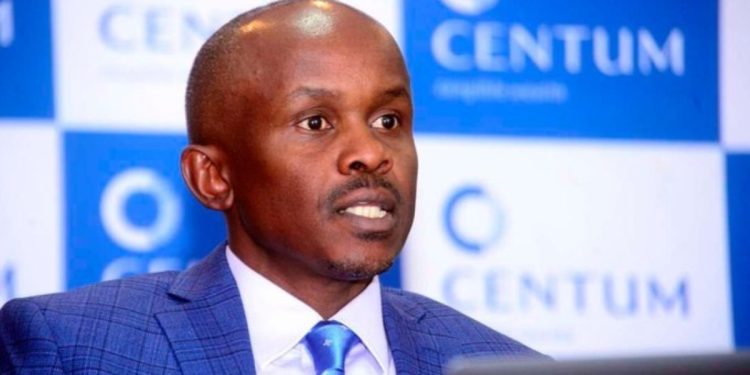 Regional investment company Centum has announced that it will pay its shareholders KSh 391 million in dividends for the year ended March 2022, even as it recorded another loss.

During the twelve months ending in march this year, Centum posted losses amounting to KSh 1.33 billion. The loss followed a loss of KSh 1.36 billion posted in a similar period ended March 2021.

The dividend payout by Centum Investments is part of the company’s strategy to boost returns for its shareholders who are sitting on major paper losses after the company’s stock declined over the past three years.

The company revealed that the payout represents a dividend per share of KSh 0.59 up from KSh 0.33 in the last financial year.

“The proposed dividend will be considered for approval by shareholders at the upcoming annual general meeting,” the Group CEO Dr James Mworia said.

In the year ended March 2022, Centum recorded a KSh 592 million operating profit in its company financial statements, up from KSh 245million in the prior period.

The improved performance was recorded at both the Company and Consolidated levels, indicating recovery of the investment firm’s underlying portfolio as the economy began to rebound from the adverse impact of the Covid-19 pandemic on economic activity.

Consolidated total comprehensive income for the year stood at KSh 142 million, a 110 per cent growth from the loss of KSh 1.4 billion recorded in 2021.

Excluding the loss from Two Rivers investment operations, the consolidated total comprehensive income for the Centum Group would have been KSh 2.1 billion, up from KSh 405 million in the prior year.

Commenting on the performance, Mworia said that Centum consolidates 100 per cent of the losses of Two Rivers, thereby over-stating the effect of the loss in the consolidated financial statements of Centum Group.

“Nonetheless, we are working with the management of Two Rivers to raise capital for the next development phase, comprising residential housing,” said Mworia.

He noted that once successful, the capital raise will see Two Rivers knock off a huge amount of finance costs from its income statement while recording a boost in its profits from the development and sale of the residential housing”.

The Kenyan company said the performance was driven by profits from the sale of houses and development rights business lines.

During the twelve months, home sales achieved significant revenue growth to KSh 1.8 billion from selling 301 completed homes. The performance rose from the KSh 457million generated from 96 completed homes in the previous year.

Centum Real Estate noted that as of March 31 2022, residential business collected cash deposits of KSh 6.6 billion from a cumulative sale of 1,739 homes with a total sales value of KSh 14.8billion. The cash collected from residential customer deposits within the year rose to KSh 2.8billion.

Commenting on the performance, Centum Real Estate Ltd Managing Director, Kenneth Mbae said that results validate their business model that centres on being attractive, demand-led and focused on high growth.

The progress comes when the investment firm announced it had sold its entire equity stake in Sidian Bank Limited to Nigerian lender Access Bank at a cost of $36.7 million.

The biggest investment firm in East and Central Africa, announced it had entered into a binding agreement with the West African bank.

Centum holds 83.4 per cent of the issued shares of Sidian, directly in its own name and indirectly through its wholly-owned subsidiary, Bakki Holdco Limited.