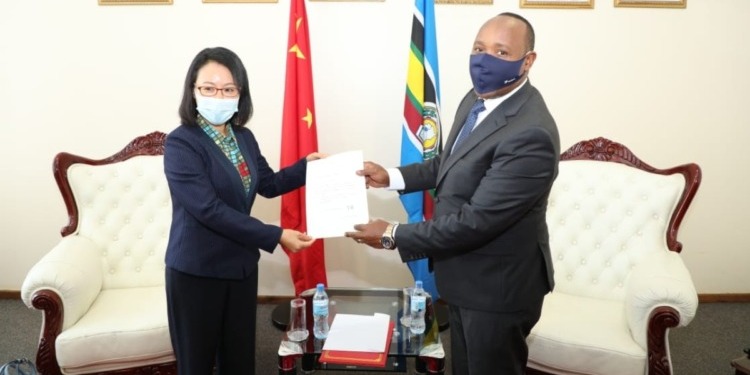 This is according to the Chinese Ambassador to Tanzania and EAC Chen Mingjian who expressed China’s keen interest in augmenting its cooperation with EAC, adding that it would positively impact EAC products going to Chinese markets especially agricultural products.

The Chinese envoy also disclosed that her country was ready to implement the process of donating vehicles to EAC to enhance its capacity.

She made the commitment while presenting her letter of credence to the EAC Secretary-General Dr Peter Mathuki, at the EAC Headquarters in Arusha, Tanzania.

On his part, Mathuki lauded the Peoples’ Republic of China for her immense support to the region, particularly through infrastructure development projects geared at enhancing intra-EAC trade.

Mathuki further hailed China for offering education opportunities to East Africans through the provision of scholarships and exchange programmes, which he said have contributed to filling the skills gaps in the labour market.

“We appreciate the support that China has given us in our programmes such as the YouLead Summit and this speaks of China’s commitment and good relations in the region,” he said.

The Secretary-General informed Mingjian about EAC’s commitment to revitalizing private sector development and urged the Ambassador to rally support in organizing for EAC private sector benchmarking missions to China to network, sample the latest technologies and exchange ideas.

Their sentiments come even as a new report released in October revealed that Kenya led the world in completing China-funded mega projects ahead of schedule under Beijing’s global infrastructure development strategy.

The report established that five projects in Kenya were done ahead of the deadline between 2013 and 2017, putting the country top amongst countries that have benefited from China’s Belt and Road Initiative (BRI).

The findings are contained in a report titled Banking on the Belt and Road which covered 13,427 projects worth $843 billion in 165 countries all funded by China over 18 years.

Tanzania warned against over-reliance on China

Another report released early this year stated that Chinese-built infrastructure is expected to fuel East Africa’s economic growth in 2021.

Judd Murigi, Head of Research, ICEA LION Asset Management, told Xinhua in Nairobi that the bulk of the East African nations experienced an economic contraction in 2020 due to containment measures put in place to curb the spread of the COVID-19 pandemic.

She added that the trade and transport sectors are expected to benefit from the improved infrastructure sponsored by the Chinese and lead the economic recovery of the East African region in 2021.

“East African nations have resilience due to the diversified nature of their economy as well as non-reliance on exports of commodities,” he noted.

The analysts noted that East Africa’s mega infrastructure projects which have mostly been funded and constructed by the Chinese have in turn facilitated private sector growth.

“As the entire East African region graduates into middle-income status, they will require world-class infrastructure to ensure it can produce competitive products needed by global consumers,” he added.

Murigi said that Kenya’s Standard Gauge Railway (SGR) has had a positive impact on the country’s economy by facilitating the flow of imports and exports.

According to the East African Business Council CEO John Bosco Kalisa, the pandemic impacted trade performance noting that EAC import declined to 3.56 billion in 2020 from 3.95 billion in 2019.

At the same time, the Director of Trade at the EAC Secretariat, Alhajj Rashid Kibowa stated that Foreign Direct Investments (FDI) in the EAC dropped by 43% to USD. 4.9 billion in 2020 and jobs declined by 2%, wiping out the gains made in the previous year.