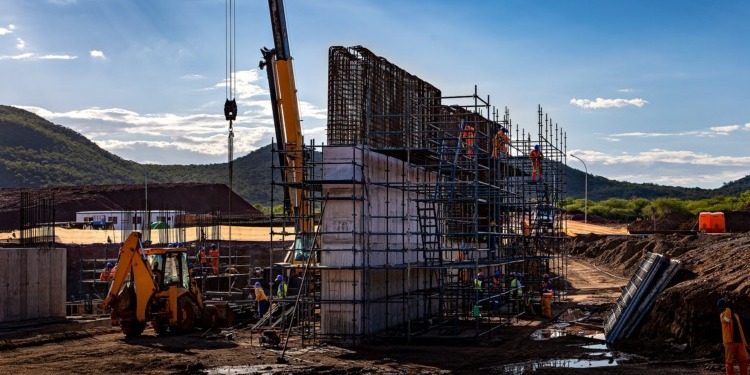 Construction in Africa: Photo by Pixabay: The Exchange

Is China is fueling Africa’s economy? That could be a question with so many angles to explore – such as – is it worth it for Africa to accept humongous loans from the industrial giant amid her journey to prosperity while opening doors for her nations to invest and heavily mark China’s ingenuity across continent-wide African infrastructure?

The World Bank has been ousted by China as the world’s largest bilateral creditor, making China the largest single country creditor on Planet Earth (The African Report, 2021).

In a larger context, Africa is now heavily being catered for financially by China. According to a report by The African Report, which cited data from China-Africa Initiative, between the year 2000 to 2018, China extended around $148 billion of loans to Africa, which were mostly targeted towards fueling infrastructure development.

Numbers do bring a unique taste of reality and in this case, public and publicly guaranteed debt in Africa by the creditor in 2019 showed that 13 per cent of the debt was owed by China—as a single country of more than one billion people and an industrial giant putting a dent across least developed countries in Africa.

This means at some point, the lending relations between the region and China falls short in terms of realizing Africa’s true development push. This can also be traced to China-Africa Research Initiative (CARI) study, which depicted how China sharply ”curtailed” its lending to Africa due to debt sustainability concerns—a constant thorn in the region before China’s first lending package.

Africa is battling debt levels to an extent some of its countries went down an economic spiral after the pandemic hit, particularly Zambia with government debt of 120 per cent of GDP in 2020, defaulting on its Eurobond in October, while Angola and the Democratic Republic of Congo are also neck and neck, with 120.3 per cent and 104.5 per cent of government debt of GDP respectively (The African Report, 2021).

These numbers on the table beg the question: is Africa benefiting from these loans with its current capacity to serve pre-existing ones?

China is more than a lender to Africa

With a collective GDP of around $2.6 trillion and prospects forecast to grow to $5 trillion, Africa is growing fast and it has the potential to do better.

As of now, Africa has become the fastest urbanizing region of the world, experiencing intense rural-urban migration and adopting the shocks of the fourth industrial revolution, which brings us to the introduction of industrial giants such as China, helping the youngest continent on earth on setting up ICT infrastructures, physical infrastructures and human capital mobilization and armouring its economy for the best-case scenario, through loans.

On the other side of the fence, Africa and China have opened up doors for business ties. According to Forbes, China is now Africa’s biggest trade partner, with Sino-African trade standing at $200 billion per year, surpassing the United States which only did $32 billion worth of trade in goods in the region (Center for Strategic and International Studies).

There are more than 10,000 firms owned by China in Africa, operating in different capacities; the value of Chinese business in the region since 2005 stands at more than $2 trillion, while more than $300 billion in investment is in the pipeline (Forbes).

China is also helping Africa unclog its economic veins by laying a helping hand in building robust infrastructures as Chinese President Xi Jinping said once, “Inadequate infrastructure is believed to be the biggest bottleneck to Africa’s development”.

However, Africa has fallen short on infrastructure funding. The region needs to spend at least $130 to $170 billion per year to realize its infrastructure objectives, whereas it is anywhere between $60 billion to $108 billion short, according to African Development Bank (AfDB); thus out comes China to help.

Ethiopia, Kenya, Tanzania, and Uganda are experiencing huge infrastructural projects spearheaded by Chinese construction technocrats, who are transforming the landscape of these economies.

It is also crucial to note the top-dollar infrastructure projects changing the landscape in the region, from the $12 billion Coastal Railway in Nigeria, $4.5 billion Addis Ababa to Djibouti Railway, to the $11 billion mega port and economic zone at Bagamoyo, Tanzania.

READ:Environmental implications of the China-Africa relations

The grim side of these interesting investments is that there are more drawbacks to these individual countries’ economies. According to Forbes 2019 publication “What is China Really Up to in Africa”, there have been warning signs on the lofty investment loans: the $4 billion Addis-Ababa to Djibouti Railway ended up costing Ethiopia almost a quarter of its 2016 total budget.

While in Nigeria, a renegotiation deal had to be struck with Chinese contractors as the top-economy in Africa failed to pay. In Kenya—East Africa’s top economy, 80 per cent of the Chinese-financed railway from Mombasa to Nairobi has already gone four times over budget, costing Kenya upwards of 6 per cent of its GDP.

The troubling concern is not on the huge investment made across Africa, which creates jobs, bridges the digital divide and offers communities a chance to fuel the economies across different sectors, but it is on how Africa sustains its debt with China amid servicing other debts accumulated over past years.

However, according to a publication by Brookings, “China’s Aid to Africa: Monster or Messiah”, several issues are key to note when scrutinizing the real essence of China-Africa lending.

“Despite Chinese leaders’ claim that China’s assistance to Africa is totally selfless and altruistic, the reality is far more complex. China’s policy toward Africa is pragmatic, and aid has been a useful policy instrument since the early days of the People’s Republic of China,” Brookings argued.

In this context, it is crucial to bring to the fore what China needs from Africa for its political and economic betterment. Africa has significant deposits of coltan—an important resource for electronics (China’s modern gold), the industrial giant imports a third of Africa’s oil, 20 per cent of cotton, and half of its manganese, which is an essential material for steel production.

Further down the scenario, Brookings noted that Chinese financing is attached to a larger piece of Africa’s natural resources pie, with low-interest loans provided to nations “who rely on commodities, such as oil or mineral resources as collateral”.

Hence, a public cry has been raised across the continent by various political groups regarding the effectiveness and morality of loans from China. Brookings showed that, in countries where mineral resources are on the negotiation table, they do suffer from “low credit ratings and have great difficulty obtaining funding from the international financial market,” whereas, on the other hand, China “strategically” sorts them out—but with strings attached.

In a nutshell, Africa is not new to such uneven situations when dealing with creditors. The most important task it has on its hands is to find the means to disengage from further exploitative and less benefiting financial support deals, by ensuring it builds a self-sufficient mechanism for its development.