Hwange Colliery employed as many as 5,000 people and supported a community of more than 100,000 in its heydays.

by Laurence Sithole
in Business, Industry and Trade
0 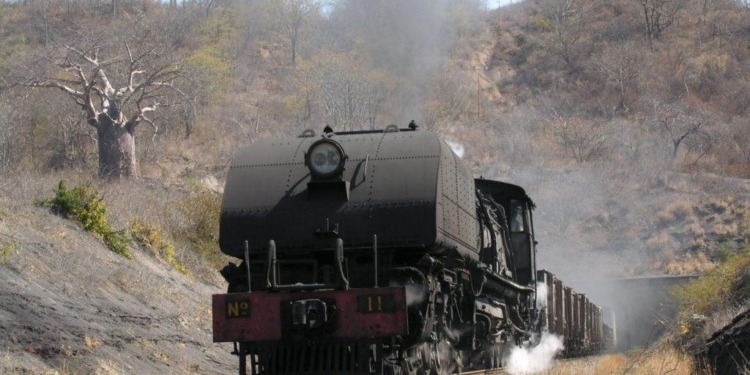 A coal engine at the Hwange Colliery mines. The giant company could have powered Zimbabwe and the larger Southern Africa region. [Photo/Flickr]

This is a review of a company that could have been an economic bellwether not only for Zimbabwe but for the entire southern Africa region.

The story of the rise and decline of Hwange Colliery Company Limited (HCCL) reads with the kind of intrigue that would make soap opera producers go green with envy.

At the height of its glory, the company employed as many as 5,000 people and supported a community of more than 100,000. So great was this company’s influence that the small town where its main operations are located is named after it. This is no longer the case.

The company is presently listed on the Zimbabwe and Johannesburg Stock Exchanges; however, it does not trade.

The company has gone through numerous phases beginning in 1893 when the resource was discovered by a German prospector. He discovered black stones that burn southeast of the Victoria Falls and then returned to peg the area. In 1900 exploration work was conducted over the Wankie district; in the following year the Wankie Coal Railway & Exploration Company purchased the mining rights to this area and in August 1901 began sinking shafts.

Two years later it began producing. In 1909 however, due to limited demand for coal, the company went into liquidation which would be a recurring theme during its life. It was in 1909 that the company was then reconstituted as the Wankie Colliery Company Limited and from that time its output increased steadily.

By the late 1920s, the company was producing well over one million tonnes of coal and it enjoyed a long period of relative prosperity until 1957 with the commissioning of the Kariba Hydro-electric scheme which reduced demand for coal and resulted in one of its shafts being closed.

Growing demand for coal in other territories that the company supplied meant that coal production had to be increased to 4.5 million tonnes. This led to the company being taken over by Anglo American effectively. Reduced demand in the 1960s because of the economic sanctions against Southern Rhodesia reduced demand for coal and led to it closing one of its collieries for the second time.

In the 1970s the company commenced open cast mining which also coincided with the commissioning of the Hwange Power Station. This resulted in high demand for coal and the country generated its electricity from burning the commodity. The expansion program was made possible by a large capital injection from the then shareholders.

The power station in 1987 is said to have reached its peak and was a secure off-taker of coal for the mining company. The company’s existential troubles began as far back as the 1980s when the country began to experience foreign currency shortages.

This resulted in a wide array of government interventions (Mining Continuation Reserve and the Mining Projects Fund) that enjoyed varying degrees of success but by and large it led to reduced production because the company was not able to import spares and other essentials.

The shortages of foreign currency and inability to source hard currency continued to undermine coal production which by 1996 had decreased by a considerable 6% from its 1991 levels.

By the turn of the century in 2000, the company managed to increase productivity somewhat; however, its operations remained severely hamstrung by the shortages of foreign currency which resulted in frequent production stoppages.

Furthermore, the production of coal was also severely affected by the country’s rail carrier’s inability to deliver coal. The National Railways of Zimbabwe, another moribund state enterprise, was also in turmoil. Years of under-investment meant that it did not have enough in terms of wagons and rolling stock to deliver coal which resulted in a shortage.

Anytime there is a headline about Hwange Colliery in the media the news borders on the unsavoury to the outright distasteful. In one instance one of its workers took the company to court to prevent it from evicting them from its quarters and for matters to do with unpaid salaries. Astoundingly, in a particularly bizarre instance, some employees who retired from the company 10 years ago still live in the company’s quarters while they await the payment of their termination packages.

Labour relations at the company have in recent times been very strained with workers in 2016 approaching the courts to have the company placed under judicial management citing gross incompetence and corruption from senior managers who they alleged were involved in business practices that prejudiced the company of millions of dollars.

The opportunity Hwange could not afford to miss…

HCCL is a pale shadow of what it used to be. The company is in judicial management; it is over-leveraged; it is hardly producing anything; its shares on the exchanges it is listed on are suspended and therefore do not trade. The image below captures aptly how the investing community views Hwange Colliery Company Limited. Investment analysts cannot provide any consensus forecast on the company and the last time that it paid a dividend to its shareholders was in 1999! 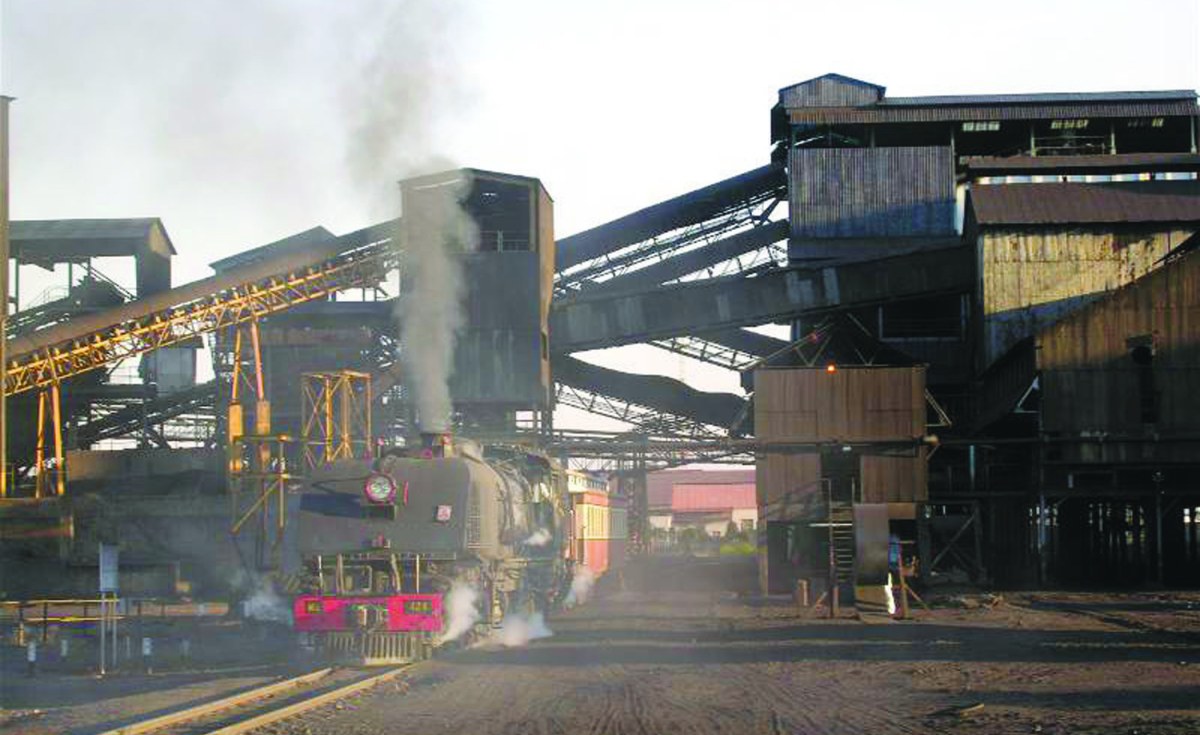 The Centre for Natural Resource Governance estimates that Zimbabwe has no less than 503 million tonnes of coal reserves and only mines a paltry three million tonnes annually. Assuming a spot price of US$230 per ton of coal, Zimbabwe is endowed with at least US$116 billion in coal. With a national resource, this massive the company should not be in the doldrums that it is in.

The company, given the first resources boom and the second one currently being enjoyed, should be awash with cash. Instead, the company is heavily indebted to the tune of between US$70 million and US$160 million which it attempted to expunge unsuccessfully through a rights issue in 2015.

The company has been limping along financially for years. In 2019 it was reported that its liabilities exceeded assets by US$19 million. This development made it doubtful that the company could carry on as a going concern after having been placed under judicial management.

The recent interim financial results presented by the company offer some consolation to investors who have been suffering for long. 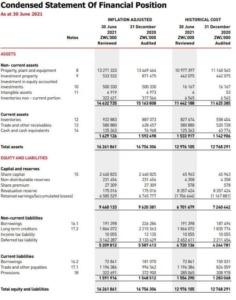 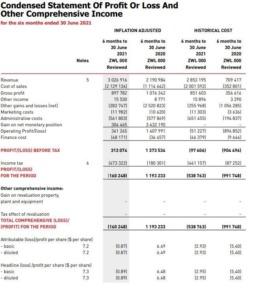 Revenue increased by 38 per cent from ZWL$2.19bl (US$24ml) in 2020 to ZWL3.03bl (US$34ml) in 2021 on an inflation-adjusted basis. This was largely due to a combination of an increase in high-value coking coal sales and regular product price adjustments in line with market value, the company said. While gross profit increased by 139 per cent to ZWL851.60ml (US$9.57ml) in historical terms compared to the same period last year.

The company managed to increase production by 51 per cent in the period under review but continued to have its operations hamstrung by shortages of foreign exchange to purchase spares. Sales volumes increased by 23.7 per cent in comparison to the previous year. The company’s focus has been on increasing production and sale of high-value coking coal which it managed to increase by 28 per cent.

HCCL lamented that sales could have been higher for this product were it not for the constraints it experienced in washing its coal.

Underground coal production was also higher by 19.41 per cent in comparison with the same period last year and it attributed this to favourable credit terms for its vendor for equipment. The company ended the presentation of its financial results with an optimistic outlook. It is still under reconstruction and is experiencing considerable difficulty in accessing working capital and credit facilities to fund its operations.

The company has been able to increase production at its mines and has, notwithstanding the difficulties, managed to secure funding from local and regional banks. It expects to stabilize its operations in the next six to 12 months targeting monthly production of 200,000 tonnes.

HCCL is a classic case of a company in distress with great potential for a turnaround. It has in situ coal reserves that are massive and can leverage this position to access long term loans to reboot its operations. The current market conditions would support its resurgence, but this will depend on the willingness of the government which is a large shareholder and other parties to come together and work through the many legacy issues plaguing it. Commodity prices are at the highest levels they have been in a decade and are envisaged to carry on their upward course as developed economies demand natural resources for their public works projects.

The company even though it produces an energy commodity widely considered to be dirty is nonetheless a key factor in the energy mix of many countries. Management of HCCL needs to focus all its efforts and strategy on export markets beginning with South Africa. That country relies heavily on thermal coal for the generation of its electricity. The leader of the South African Chamber of Mines once stated that thermal coal still accounts for 72 per cent of the country’s energy needs.

HCCL can engage the South African power utility Eskom through the Zimbabwe government which would provide the necessary assurances to obtain a “coal supply agreement” over a negotiated period to deliver coal to specific thermal power plants. The longer the term of the contract the better it will be for the company. Such an arrangement would put to rest any issues of foreign exchange the company has been experiencing.

The next step of the export growth strategy that HCCL should pursue is gaining access to the Richards Bay Coal Terminal (RBCT) which will give it access to global export markets where settlement is in US dollars. Through that terminal, the company can supply countries like China, India and Russia which are still large consumers of coal despite their efforts to go green. The pursuit of export markets growth strategy is certain to turn around the fortunes of this company which has long been in the financial doldrums and provide some respite to shareholders who have gone 22 years without a dividend.

The success of this strategy would depend on logistics and the state of the railway network connecting Hwange coal fields to South Africa as well as Transnet’s ability to rail coal to the RBCT without interruption.