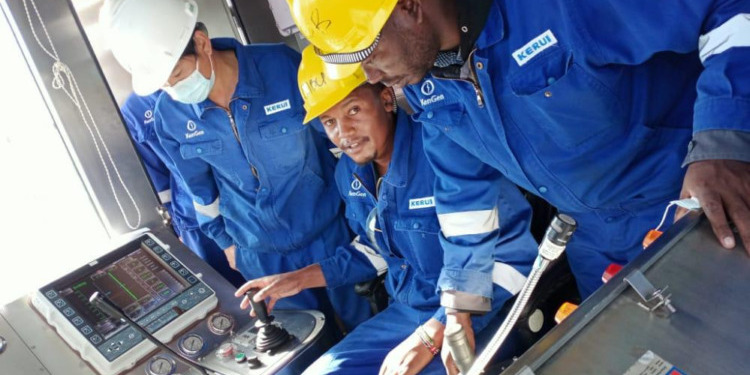 The demand for electricity in Kenya continues to grow at an average rate of 4.5% year-on-year driven by high business activity as the country recovers from the effects of the global COVID-19 pandemic. Photo: KenGen

Kenya: Demand for electricity rises in 2021 pushed by economic recovery

More than 92% of the electricity consumption was from renewables

Kenya Electricity Generating Company (KenGen) has revealed that demand for electricity in Kenya has continued to grow at an average rate of 4.5% year on year in 2021.

The electricity producer said growth was driven by high business activity witnessed in the East African country, amid ongoing recovery from the impact of the coronavirus pandemic.

KenGen also revealed that the country had scaled up use of renewable sources during the year under review, further boosting its standing in the fight against climate change.

The firm’s board chair Samson Mwathethe said Kenya’s peak demand for electricity had grown to a historic high of 2,036MW in November 2021.

Of the amount, Mwathethe observed that more than 92% of the electricity consumption was from renewables.

“We are glad to note that in the past two years under review, despite experiencing the challenging operating environment owing to restrictions brought about by the COVID-19 pandemic, we recorded progress as a country,” he said.

He further revealed that the company had committed to creating more value for its shareholders, with the focus being on accelerating the deployment of additional capacity to boost Kenya’s renewable and clean energy reserves.

“Our capacity addition program is well aligned to the Government’s Big 4 Agenda and the country’s Kenya Vision 2030’s industrialization goals and medium-term development plans. This is critical in ensuring that we support the Government’s plan towards the provision of universal access to electricity to all in Kenya,” he said.

Mwathethe said that the company was preparing to add another 83MW to the national grid in the first quarter of 2022 once the Olkaria I, Unit 6 geothermal power plant is commissioned.

This is in line with what President Uhuru Kenyatta told the international community that Kenya is determined and on course to achieve the full transition to clean energy by the year 2030.

Mwathethe’s sentiments barely a month after the firm said it had started drilling the first of three geothermal wells in Djibouti, setting in motion a KSh 700 million contract signed in February this year.

According to the company, the drilling of the first well is expected to take about two months to complete as KenGen seeks to export the expertise and experience earned in Olkaria, Naivasha where the company has successfully drilled about 320 geothermal wells.

KenGen Managing Director and CEO, Rebecca Miano termed the deal a historic moment for the firm.
“We are confident that our team on-site will deliver the project within the contracted time and on budget despite the prevailing circumstances brought about by COVID-19 and security situation in neighbouring Ethiopia.”

The CEO said KenGen had assigned a highly specialised multiskilled team to the project in the Horn of Africa country comprised of mechanical Engineers, drilling Engineers, project managers, drillers, cementing technicians and specialized welders among other key professionals in the geothermal development value chain.

Ethiopian project
In August, the company announced that it had surpassed a crucial stage in the ongoing USD 6.2 million geothermal drilling contracts in Ethiopia.

Miano said a team of KenGen engineers had crossed the 450 meters of drilling depth of the first of eight geothermal wells for the state-owned electricity producer, Ethiopia Electric Power Company which commenced in May this year.

“The first 450 meters is the most difficult phase of the entire geothermal well drilling process which can go up to a depth of 3,000 meters,” Miano said.

“This particular one is being done under peculiar circumstances including unforeseen delays occasioned by the COVID-19 pandemic,” she added.

The CEO added that they will be drilling at a rate of about 50 meters per day going forward and therefore expect to complete the remaining part on schedule in about two months.