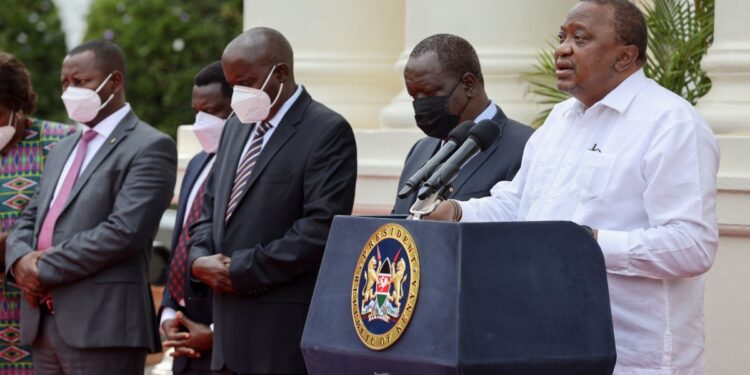 At least 2.3 million Kenyans in 23 arid and semi-arid counties affected by drought will benefit from government relief. On Monday, President Uhuru Kenyatta flagged a consignment of emergency relief supplies to reach all affected people.

Kenyatta said the government is focused on implementing interventions to build resilience in all vulnerable households.

He added that the government was diversifying livelihoods from drought-sensitive activities to drought-resilient ones and improving early warning and impact forecasting systems.

He added that the government had undertaken several measures since the 8th of September 2021, when he declared the ongoing drought a national disaster and immediately put measures to cushion the affected populations.

He said the government had released KSh 2 billion to assist the affected households through relief food distribution, water trucking and a livestock offtake programme immediately after the declaration of the ongoing drought, a national disaster late last year.

President Kenyatta said from October 2021 to date, the Kenya Meat Commission has bought 11,250 cattle and 3,200 sheep and goats from the counties most affected by drought.

He added that the government also launched the Emergency Relief Cash Transfer in December 2021, which saw over KSh 600 million disbursements through the M-Pesa platform to over 225,000 vulnerable households, which translates to a population of over one million.

“The boreholes are complete with the associated works for domestic and livestock use. We are now expanding the programme to cover the Wajir, Mandera, Garissa, Tana River, Meru, parts of Machakos and Kitui counties,” he said.

At the same time, the President directed the responsible ministries and agencies to immediately complement the cash transfer programme with relief food distribution to overcome challenges such as vulnerable households lacking mobile telephone numbers and devices.

“I also direct all responsible ministries and agencies to ensure that the livestock offtake programme, the water trucking programme, and donated medical supplies and relief food reach the affected populations in these counties without any delays,” the President said.

In a related story, the Food and Agriculture Organization of the United Nations (FAO) and partners warned that an extended, multi-season drought is driving acute food insecurity in the Horn of Africa, with 12 to 14 million people now at risk as crops continue to wither and animals weaken.

Resource-based conflicts are escalating as competition for water and pasturelands increases, and malnutrition rates are rising in affected areas of Ethiopia, Kenya and Somalia, highlighting the need to sustain the rural livelihoods that underpin peace and food security across the Horn.

FAO and its partners reported that the food security outlook in the region would be highly dependent on the performance of the upcoming rainy season, with forecasts currently uncertain.

In a worst-case scenario in which the rains completely fail and agricultural-dependent communities do not receive adequate support, the number of highly food insecure people could climb to 15-20 million – with some worst-affected households facing “catastrophic” hunger conditions.

In January, the International Rescue Committee (IRC) said it was highly concerned by the continued drought across the Horn of Africa over the last few months.

The IRC is calling for immediate and urgent scale-up of humanitarian help to avert a humanitarian catastrophe affecting at least 25 million people in the Horn of Africa in the small window of the coming few months.