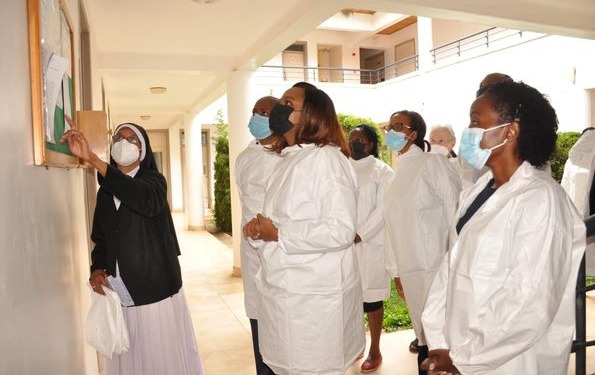 The treatment optimization in children aims at the provision of child-friendly treatment options that support viral load suppression and better treatment outcomes.

Kenya has made tremendous strides in the fight against HIV.

According to data from the ministry of health, currently, there are approximately 1.5 million People Living with HIV in Kenya out of which 106, 807 are children.

Out of the over 1.2 million People Living with HIV currently, those on antiretroviral therapy (ART)are 68,011  children below the age of 15 years.

The government has been making deliberate efforts to reduce the transmission of the disease and death rates resulting from the same.

Speaking at Nyumbani Children’s home in Nairobi, the Chief Administrative Secretary (CAS), Dr Mercy Mwangangi said that to accelerate the improvement of treatment outcomes, the program has prioritized the transition of Children and Adolescents Living with HIV to optimized ART regimens, a process that started in 2018.

This is certainly a step in the right direction as the country’s health sector is receiving a lot of attention from both the government and the private sector.

Generally, the global pandemic has affected many sectors and dealing with HIV has taken a hit as well. However much progress has been made in reducing prevalence as well as transmission in the country’s hot spot areas.

Counties with a high HIV prevalence include Busia, Siaya, Homa bay, Migori and Kisii. Kenya has the fifth-largest number of persons living with HIV in the world, and HIV continues to be a leading cause of adult morbidity and mortality.

Caroline Odera the Deputy County Aids Co-ordinator in charge of Voluntary medical male circumcision (VMMC), Prevention of mother-to-child transmission (PMTCT) and all the HIV preventive measures in Migori county breaks down the numbers in HIV prevalence in the county.

“We have doubled the national prevalence. We have new people getting infected with HIV each day.” She explained.

Deputy Casco also noted that the county has a population of people aged 15 years and above getting HIV every year. Every year the county records an average of 1000 infections.

“That is a concern and that is why we push the preventative measures so we can reduce the HIV burden in the county. There has been a decrease last year we were at 13.8 per cent the year before we were doing 14 per cent so we are on a decline.” She noted adding that the HIV incidence and new HIV infections are now coming down.
This indicates that the preventative measures are working.

According to Ms Odera, adolescents are more vulnerable to HIV infections in the county. “In a year we record a total of around 400 people between the age of 15-19 getting HIV and about 500/600 people between age of 19-24 getting infected,” She says.

What makes them so vulnerable?

There are a couple of triggers making these groups of people be predisposed to the infections.

They include:
Poverty: Most of these households are not economically empowered, so many of these
adolescents go out to look for work. Some of them are being used at places of work. Some of
them even engaging in sex for money.
Insufficient advocacy: According to Ms Odera, the ministry of education doesn’t allow sex-
specific education in schools.

“Yet it is in school where they mingle and have sexual intercourse with their fellow students and increase the rate of infections.” She explained.
Sexual assaults: Ms Odera says that there have been many incidents where adolescents are sexually assaulted by people known to them. She says that some of these perpetrators are still at large and continue to assault other girls.

Measures to help reduce HIV prevalence among these groups

To avert this situation; Ms Odera says that the county is currently having meaningful engagements with teachers showing them the current HIV prevalence among the adolescent group.

“We are also having a county multisectoral strategy where all issues adolescents are addressed. This includes the ministry of education, the children’s department and the ministry of health among others. A number of teachers are sensitized and informed and we are seeing E’s getting into the schools to talk about issues sex and sexuality and with this approach we are going to see a reduction of the prevalence in this particular group,” she said.

According to data availed by the ministry of health, Dolutegravir (DTG) based regimens have high potency, a high genetic barrier to HIV drug resistance, low toxicity, and have fewer drug-to-drug interactions.

It says that the availability of DTG 50mg film-coated tablets will foster improved adherence among the Children and Adolescents Living with HIV thereby improving treatment outcomes in children and adolescents.

“Evidence supports using DTG as a preferred First line ARV drug for Children and adolescents living with HIV with approved dosing and people co-infected with TB. The donation today adds an impetus to ensure that no child or adolescent living with HIV and has been transitioned to DTG as their current regimen, misses their drugs,” she added.

The government continues to create a policy environment that will ensure an effective response. There has been an increase annually of the domestic budgetary allocation for HIV/AIDs under UHC with the full involvement of all stakeholders in the development process. In addition, transition planning from donor dependency is ongoing all the while noting the tremendous effort required to sustain the gains made.

How the global pandemic has affected HIV

Dr Mwangangi noted that the effects of the Covid-19 pandemic last year have particularly been felt this year as optimal stocking of HIV commodities is yet to be achieved.

The Kenya Population-based HIV Impact Assessment (KENPHIA) 2018 survey shows that the prevalence of HIV in women is at 6.6%, twice that in men at 3.1%. The gender disparity in the burden of HIV is even greater than 3 times in between the ages of 20-34 years.