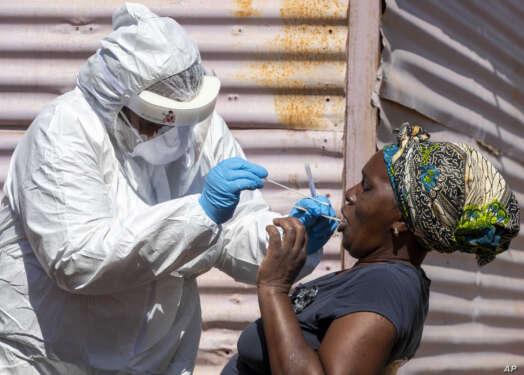 A woman opens her mouth for the heath worker to collect a sample for coronavirus testing during the screening and testing campaign aimed to combat the spread of COVID-19 at Lenasia South, south Johannesburg, South Africa, Tuesday, April 21, 2020. (AP Photo/Themba Hadebe): Exchange

The world has once again passed through a global challenge (COVID-19) that has not only solidified the demand for stronger and resilient health systems but also for robust economic systems that are not only GDP-driven.

The pandemic has shown the globe that more is needed to fortify our systems, as nearly 95 million people have contracted the virus and more than two million people have succumbed to it, while millions face the economic shocks of the virus, particularly those located in developing economies.

A World Economic Forum (WEF) publication which is part of The Davos Agenda (a virtual global leaders’ meeting on sustaining an inclusive and cohesive future) noted that the pandemic has exposed several threats to the world.

The pandemic has shown its wrath differently across the planet. For instance in Africa, the virus shocks have wiped out nearly 35 per cent of international tourist arrivals just throughout January to April 2020, destabilizing the continent’s $40 billion in tourism revenue.

With that being said, WEF pushes the agenda that, “With greater national preparation and international coordination, some of the worst impacts of the pandemic could have been avoided. It is now clear that there are myriad ways in which global risks can destabilize countries and communities”.

There are means to build a stronger front that can face-off with any disaster that might come, and the only way is to fence our systems with an inclusive and sustainable mechanism.

As much as inequality presents a hardship to battle especially in Africa—the second unequal continent in the world (Oxfam, 2019)—the likelihood of the unfortunate majority being left behind post-pandemic is huge.

It is of paramount importance to handle this scenario as the Global Risks Report 2021 stated that public health gaps, digital inequality, education disparities and unemployment may fray social cohesion because “too many people have little to lose”.

The WEF noted that as the virus shocks keep on affecting businesses and workforces, there is a possibility of new inequalities to emerge as businesses will be forced to adapt to a shifting economy.

“Alarmingly, the global recession is expected to force as many as 150 million more people into extreme poverty. Managing these risks must be at the top of leaders’ agendas,” the WEF publication read in part.

It is vital to put down measures to deal with inequality especially for Africa—the youngest continent on the planet—which had serious unemployment numbers prior to the virus; nearly 10 to 12 million potential youth enter the workforce pool with only three million formal jobs available.

Hence, improving spending on health, education and social protection, assessing the progressivity of tax policy, as well as labour rights and minimum wages are good pillars to start for African governments when dealing with inequality (Oxfam).

Deploying technology for the common good

WEF argues that inequalities will only deepen if digital gaps are not addressed in the near term. In a time where technology advancements occur daily, there are serious digital divides that mar inclusivity as the world goes digital, especially during the pandemic.

In Africa, nearly three-quarters of the population in Sub-Saharan Africa (747 million people) have a mobile connection, but only a third of these (250 million) use smartphones, according to a research repository, Africa Portal.

On a larger scale, the virus has propelled the pace of automation, with half of all employees requiring reskilling by 2025 as more than 85 million jobs will be displaced (WEF, 2021).

Governments and businesses need to work together to close the digital divide. This involves reskilling and upskilling programmes to cater to students and workers with the tools they require for a rapid shift in the labour market.

While in Africa, there is also dealing with weak ICT infrastructures, addressing socio-economic issues related to technology as many can’t afford access to technology—thus prompting macro-economic policies targeted at improving livelihoods of citizens to trigger their purchasing power towards tech services.

Further, WEF argues that in the workplace, emerging technology can help reduce bias from recruitment processes, diversify talent pools, and benchmark diversity and inclusion across organizations.

In the case of Africa, by deploying technology for the common good there are benefits attached to that of transforming Africa. According to Brookings—a think tank based in the US—by reaching the African Union’s goal of universal and affordable internet coverage GDP will rise in Africa by 2 percentage points per year, while the probability of employment regardless of education background increases by 6.9 to 13.2 per cent when reliable and fast internet becomes available boosting productivity and exports.

Building blocks for a new economy

It is no secret that the pandemic has disrupted global and regional economies. All nations have seen how important it is to have strong economic systems that will at least shield communities and businesses from crumbling at the first sign of a disaster.

Rebuilding the post-COVID–19 economy is not easy and won’t be done by accommodating the normal economic scenarios; it requires a more comprehensive definition of economic success to serve as a guide for economic recovery (WEF Dashboard for a New Economy report, 2020).

“Despite a range of long-standing efforts to define alternative measures of economic progress, reverting to conventional growth in the gross domestic product (GDP) as the core economic policy objective remains a reflex for most governments. Indeed, the latest survey of the Forum’s Chief Economists Community finds that global progress by governments in implementing multi–dimensional measures of economic performance is perceived to be limited at best,” WEF Dashboard for a New Economy report noted.

To build a strong new economy, the report proposed and narrowed down five core principles to anchor a new narrative and set of policy targets for the post-COVID-19 economy.

Although the pandemic impacted global economies differently, these five pillars promote a more inclusive and sustainable manner of addressing recovery which is stronger and resilient.