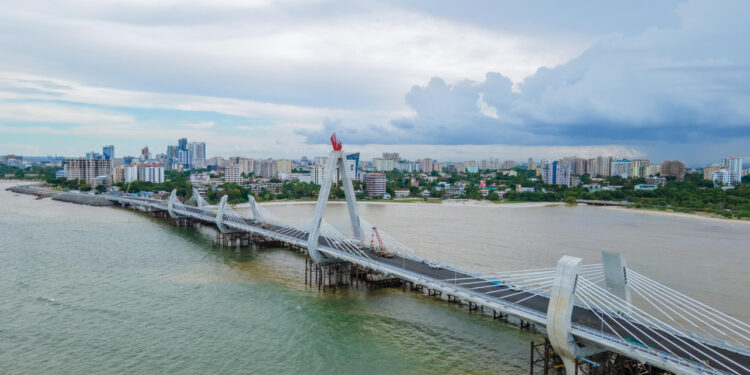 The central bank of Tanzania pointed out the economy grew by 4.3 per cent in the quarter ending September 2021

by Padili Mikomangwa
in Business, Industry and Trade, Premium
0
Share on FacebookShare on LinkedIn

Tanzania’s economy is progressing strongly despite global financial shocks propelled by the pandemic.

According to the economic bulletin produced by the central Bank of Tanzania (BoT), the economy grew by 4.3 per cent in the quarter ending September 2021 , which is higher than 4.0 per cent in the corresponding quarter in 2020 – mainly driven by agriculture, transport and storage, trade and repair, manufacturing, mining and quarrying, and construction.

On a comparative basis, Tanzania has stood relatively high compared to the African Development Bank’s optimistic forecast for real GDP growth of 4.1 per cent, contributed by improved performance of the tourism sector and the reopening of trade corridors.

READ: The 1.7M dollar buzz from the bees in Tanzania

As the COVID-19 pandemic shuttered some crucial income streams in Tanzania, such as tourism, agriculture came to the rescue as the main driver of GDP growth for the year ending September 2021. 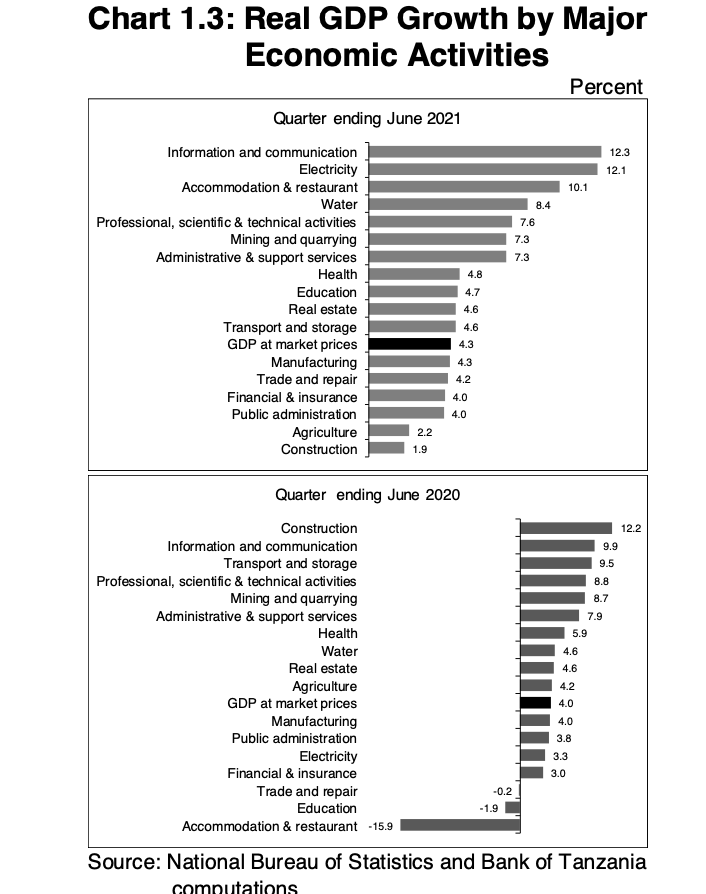 Looking further on, Tanzania has been recovering and building itself even better through the information and communication sector which has recorded the highest growth rate of 12.3 per cent. The central bank argues that this growth is attributed to the increase in digital mobile services uptake and expansion of broadcasting and internet services.

Growth has been marked in electricity by 12 per cent to 1,764 million kWh from 1,589 million kWh recorded in 2020. Electricity puts Tanzania at a stable competitive stage as more people access energy, sparking production over space and time.

In this portion of the economy, overall headline inflation was at 3.9 per cent in the quarter ending September 2021, which is slightly higher than the 3.4 per cent recorded in the previous quarter.

“The increase was mainly attributable to a rise in prices of some non-food items including garments, accommodation, household maintenance and transport,” the BoT report noted.

On the other hand, core inflation, whose index accounts for the largest share in the consumer price index, was 4.4 per cent higher than 3.7 per cent in the previous quarter. The report argues that this increase was due to accommodation and transportation prices.

However, inflation rose to an average of 4.4 per cent in the quarter ending September 2021 from 2.5 per cent in the preceding quarter on necessary items such as energy, fuel and utility.  The growth was attributed to a spike in oil prices in the world economy and tight oil supplies.

The central bank made considerable efforts to keep the economy afloat by bringing up accommodative monetary policy to support the recovery of economic activities from the pandemic.

On domestic credit in the private and public sectors, credit grew by 7.0 per cent, compared with 9.8 per cent and 10.7 per cent registered in June 2021 and September 2020.

In terms of loans, the report noted that supportive monetary conditions brought about by the BoT in July 2021 range from lowering lending rates to increasing the flow of credit to various economic activities.

Over the past decade, Tanzania has seen steady growth in the banking industry. Hence the bank noted that credit offered by banks extended to personal activities, trade and manufacturing activities.

Tanzania’s public finance has evolved over the past decade. It has taken on a new shift – building its internal revenue streams to head its development funding. The ascensions are seen in different avenues, including breaking historical revenue collection records in 2020, exceeding its monthly targets.

However, in the report, during the quarter ending September 2021, the resource basket, made up of domestic revenue and grants, stood at more than $2 billion –higher by 12.3 per cent than the level registered in the same quarter in 2020.

“Government expenditure amounted to $3.033 billion, which was 90.9 per cent to the estimate for the period,” the report argued.

On revenue and grants, total domestic revenue for the quarter ending September 2021 stood at $2.38 billion, which was 88.9 per cent on target and higher by 10.7 per cent than revenue for the corresponding quarter in 2020.

Like many other countries, Tanzania is dealing with debt while striving for development. This report expounds on the stock of national debt that has increased, standing at more than $26 billion at the end of September 2021.  This is an increase of $1.038 billion and $3.013 billion from the stock at the end of the preceding quarter and the corresponding quarter in 2020, respectively.

Tanzania is one of several sub-Saharan countries that holds a significant amount of debt. According to the central bank economic bulletin, the central government has continued to be the largest holder of external debt during the quarter ending September 2021, with a share of 75.9 per cent of the total.

In the external sector, performance was split. According to the report, during the quarter ending September 2021, the value of goods for export rose by 15 per cent to $1.962 billion compared with the same quarter in 2020.

The central bank report argues that the performance on exports was contributed by the improved performance in non-traditional exports, especially horticulture, cereals and manufactured goods.  “Traditional exports value increased to $173.2 million from $69.8 million, supported by tobacco, cloves and cotton exports.”

On the other hand, value of goods imported rose by 21.1 per cent to $2.524 billion during the quarter ending September 2021, compared to the same period in 2020.  The value of all categories of goods imports increased, with much of the increase registered in oil, owing to a rise in world market prices (BoT).