The coronavirus pandemic has also affected Africa's economies and regressed significant strides made over the past years. 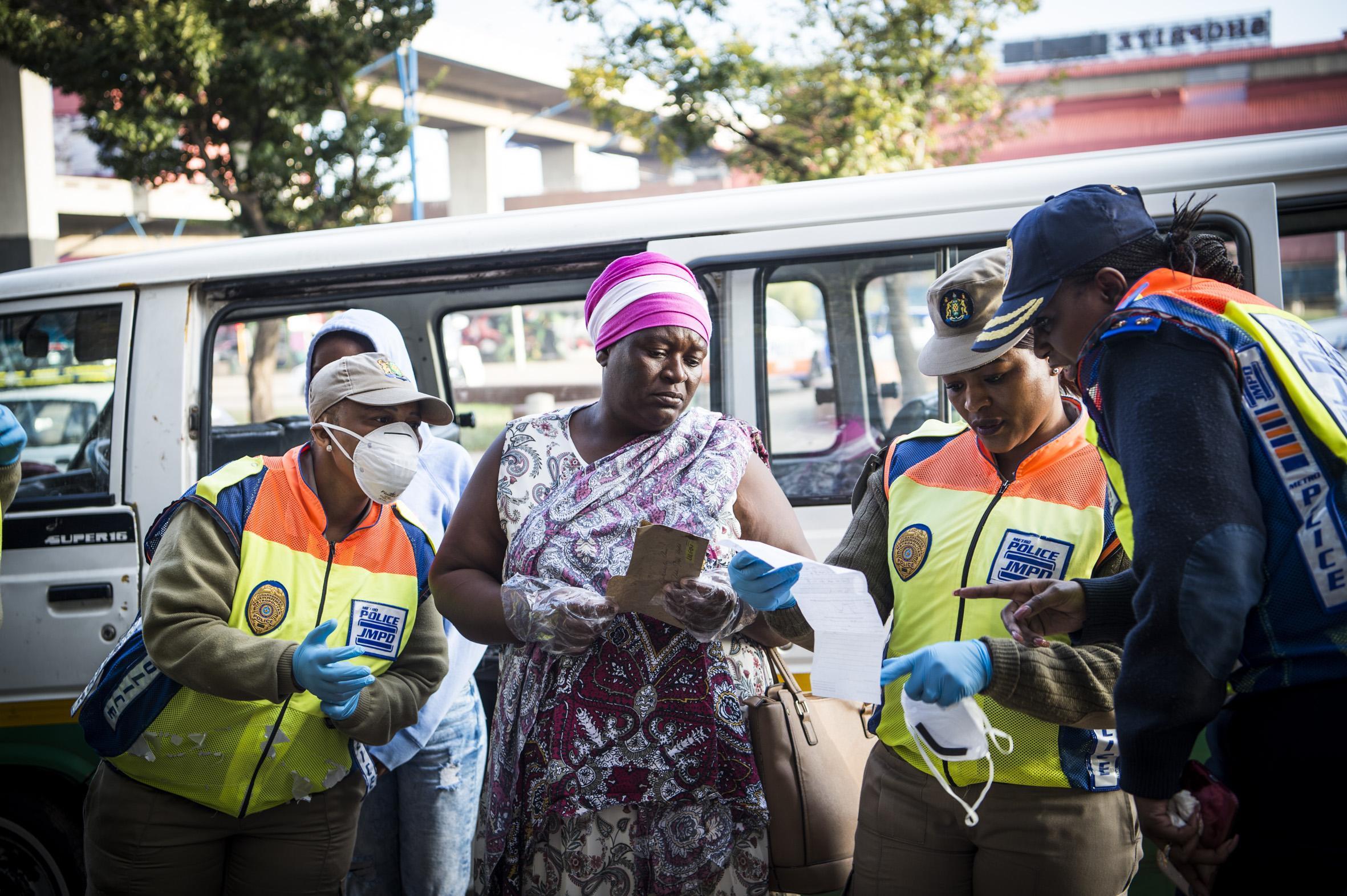 It is with no doubt that the coronavirus pandemic (COVID-19) has caused serious troubles for economies around the world, namely in the developed world. However, addressing the matter in much of the developing world is quite different, as many governments have seen national economic outputs derailed by a few years. The situation is much worse, as its knocked off many African countries from their respective economic trajectories.

The health pandemic brought it’s friends along, as we’ve now witnessed an economic pandemic of sorts. Food crisis, housing crisis and political crisis have been all party to Covid-19, a theme that was explicit in the 2020 Bill and Melinda Gates Goal Keepers report published just last month (September 2020).

The report raised interesting issues to examine attentively. It argued that in just 25 weeks almost 25 years of progress was regressed, particularly on the Sustainable Development Goals and in particular in the developing world.

The International Monetary Fund (IMF) echoed similar sentiments via its economic forecasts indicating that much of the global economy will fall into a deeper recession in late 2020, and very slow recovery in 2021

This is all but fair to say, but yet no one really knows the major economic setbacks, up until a year after the chaos has actually settled. With the second wave hitting most of Europe and North America, the economic shocks are yet to be felt worldwide. Where Africa stands in all of is a question that only Africa can answer for itself.

In spite of the pandemic, the IMF report–Reopening from the Great Lockdown: Uneven and Uncertain Recovery, published in July 2020, indicate that, “ Global output is projected to decline by 4.9 per cent in 2020, 1.9 percentage points below its April forecast, followed by partial recovery, with growth at 5.4 per cent in 2021”

While the global community is reeling from the effects of the first wave, and entering the second, its important to note that the pandemic’s impact on Africa has not been as severe as that of the rest of the world. There’s been considerable outcry of debt-relief, yet How Africa seeks to recover is a matter it must deal with on its own.

READ:How will the hospitality and tourism industry win the war against COVID-19?

“At the same time, however, lower-income countries have been limited in their capacity to provide similar economic stimulus. In most cases, the size of the economic stimulus as a per cent of GDP is higher in G-20 countries than in sub-Saharan African countries” the report argued.

In revitalizing the African economy—in the prior to the pandemic, loans have been a part of it, hence—during the pandemic situation African has seen a slew of financial support provided in the backdrop of fiscal stimulus.

It is important to note that, from March 2020, the World Bank has made available nearly $12 billion across Africa to help countries respond to the COVID-19 crisis, via a combination of new operations in health, social protection, economic stimulus and other sectors, as well as redeployment of existing resources (World Bank, 2020)

To understand this scenario and its associated challenges in the continent, it is important to lay a few facts on the table. First, the continent could experience some economic blowback due to the pandemic.

The real GDP in Africa is projected to contract by at least 1.7 per cent in 2020, dropping by 5.6 per cent points from January 2020 pre-COVID-19 projection made by African Development Bank (AfDB), according to AfDB, African Economic Outlook 2020-Supplement.

The World Bank (WB)—one of Africa’s constant lenders, argued that the region could face a severe food security crisis, with agricultural production expected to contract between 2.6 per cent and 7 per cent.

While, the UNCTAD July publication, Assessing the Impact of COVID-19 ON Africa’s Economic Development, shows that, the continent will experience a regional average of about 5 per cent in public revenue losses. Total merchandise exports are expected to contract by about 17 per cent in 2020.

Nearly 60 per cent of the population in Africa relies on agriculture for their livelihoods any distortion in this sector threatens the progress of the region.

With a contraction of national output, decrease in agricultural production, significant problems may arise, such as inflationary pressures, as has been seen in countries such as Zambia, where real inflation has hit nearly 15 per cent.

Another fact on the table is that in April the WB and IMF called for bilateral debt standstill, which was argued to lift the burden of the pandemic on Africa’s poor.

In the same context in March, many African governments requested for an immediate emergency recovery fund of $100 billion to combat the impact of the virus.

From that standpoint, it is also crucial to note that, the Sub-Saharan Africa (SSA) region received $35.8 billion in total debt service in 2018, 2.1 per cent of regional gross domestic product (GDP), of which $9.4 billion was paid to official bilateral creditors (about 0.7 per cent of the regional GDP), (World Bank, 2020).

So far, there are countries in Africa which have managed to receive loans to buffer their economies against the virus. Kenya received $ 1 billion to support closing fiscal financial gap, with inclusive growth agenda on the table, such as affordable housing and supporting farmer’s income.

The challenge of any type of stimulus programs in Africa are dependent on their respective countries slush funds or ability to bolster the economy in times of crisis. For the most part, African countries do not have the excess resources at bay to handle major economic shocks, and therefore aren’t in a position to deliver stimulus programs, as the world has witnessed in places such as the United States, Canada, Britain and other parts of Europe. Rather, many African countries have sought for greater debt relief as a measure to enable them to service their current debt but also to address the health challenges that were posed during the first wave of the pandemic.

This argument falls under the fact that, it is all about countries utilizing better fiscal policy space, whereby most of the adopted measures include cutting interest rates and the provision of liquidity assistance to cushion households and firms, they have also increased their social protection expenditure to effectively cushion the poorest households during the lockdowns (UNCTAD, 2020)

The report pointed argument in that context that, the average stimulus funding as a per cent of GDP is around 22 percent in G-20 countries and only around 3 per cent in sub-Saharan African countries.

In the context of cross-examination, a report by UNCTAD, argues that the threat of potential recession in Africa is vivid, mainly through the international trade links where very few countries on the continent have the capacity to implement stimulus packages to cushion their economies form such an impending COVID-19 global recession. 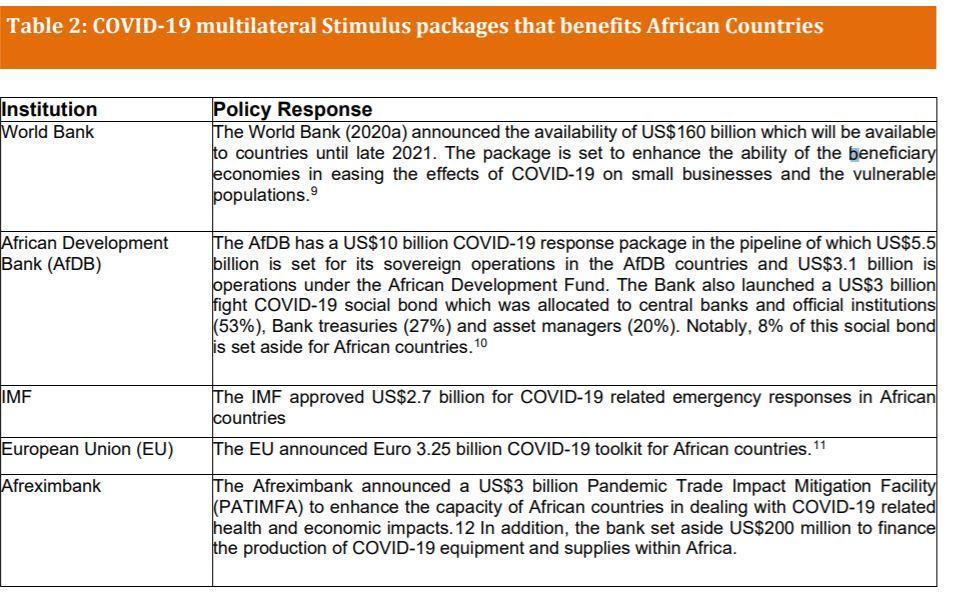 South Africa, Egypt, Tunisia and Morocco are few African countries which are set to inject billions in their economies to revive growth.

However, the Brookings report proceeds to reveal some positive trends across the region regarding recovery.

“In Nigeria, for example, more than 100 private sector partners created the Coalition Against COVID, which has raised $80 million so far to support the Nigerian government’s response to the pandemic. Many African countries, including the members of the West African Economic and Monetary Union (Benin, Burkina Faso, Côte d’Ivoire, Guinea-Bissau, Mali, Niger, Senegal, and Togo), have either implemented new digital cash transfer programs or expanded upon existing programs to distribute money directly to their citizens,” Brookings report argued.

At the moment the entire globe is racing back to recovery and that race is not even across the globe, still—hardships are faced by Africa governments, whose citizen have been thrown onto the extreme poverty line.

Keeping the food supply chain functions is crucial to avert food crisis and maintain the agricultural production catering for millions of livelihoods in the region.

Also highlighting the WB approach, the region ought to consider implementing social protection programs to support workers, especially those in the informal sector.

The health systems in Africa have been facing setbacks, thus a proper allocation of adequate financing could lift a huge burden, not only during pandemics but across the health landscape at large, including Malaria and HIV/AIDS battles, demanding more fiscal attention.

It is only wise for the region to strategize and work as a whole towards recovery—which eventually could be a bit harder considering, some nations such as South Africa, Burundi, and Zimbabwe to mention a few are still battling extreme inequality, poverty and economic slowdown.

Overall, the abilities of African countries to enact and engage stimulus programs must fall within their national regulatory policies aimed at pro-poor economic growth. With much of African governments currently experiencing protectionist policies, this should be an easy approach, but the impediments to develop integrated economies and ensure the ability to raise debt on the open international market has become a major factor in hampering any government to actually create sound stimulus packages that can be absorbed into respective economies.

African countries must be able to raise the debt and use that effectively without, yet the argument of debt forgiveness is one that continuously creeps in, thus making it difficult for African governments to actually have access to raise funds for economic revitalization. No one wants to give provide funding for Africa, if they’re not going to repay their current outstanding’s. The time for Africa to step out from being a beggar to standing on its own feet is what is needed, while initiating sound fiscal measures. Let’s hope Africa can stand on its feet one day soon and call its own shots, and be a lender than a borrower.