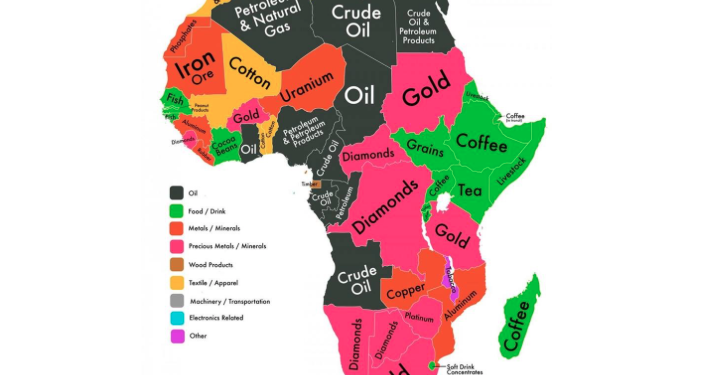 22 of the 54 African countries are resource-rich, and account for slightly more than two-thirds of Africa’s GDP and for half of its population.

These resources constitute a primary source of public revenue and national wealth. Crude oil and natural gas, in particular, contribute significantly to the economies of resource-rich African countries.

African countries are categorised as either resource-rich (encompassing both oil and mineral exporters); oil-rich (oil and gas); mineral-rich (other minerals, such as metals); or resource-scarce.

Of the 54 African countries, 22 are resource-rich, meaning that fuel and mineral exports contribute over 20 per cent to GDP. These countries account for slightly more than two-thirds of Africa’s GDP and for half of its population. Half of these countries are oil exporters (fossil fuels), while the other half are mineral exporters (metals and other minerals).

In contrast, there are 31 resource-scarce countries, which account for 30 per cent and 48 per cent of regional GDP and population, respectively. For example, oil revenues account for more than half of all revenues in Angola, Congo, Equatorial Guinea, Gabon, and Nigeria.

As the world shifts to clean energy, Africa’s oil and gas producing nations are feeling the pressure of this transition. This is because, while those African governments – whose economies depend on oil and gas revenues – hold the key to accelerating this process, the oil itself is a non-renewable resource. If mismanaged, it could cause more harm than good to the economy.

Moreso, an analysis by Mckinsey on The future of African oil and gas: Positioning for the energy transition showed that economies that depend on oil and gas revenues, have oil reserves that both cost more to produce and are, on average, more carbon-intensive than oil and gas from other regions.

That coupled with African governments’ history of astronomical corruption levels, revenue mismanagement, inadequate capacity, lack of local participation and opaque contracts makes it difficult to make the right strategic choices and synchronize their implementation in a context that supports fiscal prudence and minimizes macroeconomic distortions.

Further, even when the resource is mined, more often than not the wealth from the natural resource fails to return the expected economic growth. This has been attributed to several factors by the report Oil and Gas in Africa including: Dutch disease — the syndrome of rising real exchange rates and wages driving out pre-existing export- and import-competing industries; rent seeking by elites and others who could otherwise put their energies into profit-making activities; price volatility and the “asymmetry of adjustment” (it is easier to ramp up public expenditure than to wind it down again); inflexibility in labour, product, and asset markets; and tensions between oil-producing and non-oil producing regions within countries.

All challenges notwithstanding, there are a few things that can be done to help negotiate better deals with oil exporters to cushion themselves.

Once the African Petroleum Fund (APF) within the African Union is established, it would help mitigate, or even neutralise, the effects of the balance of payments from the increase in oil prices on poor African countries dependent on oil imports.

The APF will do this by smoothing out domestic (African) price fluctuations in oil and petroleum derivative fuels caused by unpredictable changes in international market dynamics. The immediate expected result is reduction in the effects of unforeseen natural and geopolitical factors that drive international oil prices.

In a wider perspective, the APF also aims to become a platform for the regional integration of African countries by promoting intra-regional import and export of oil products and by becoming a discussion forum for mitigating the high economic and social costs of the external shocks that accompany oil and gas market price changes.

In addition, petroleum product price stabilisation funds have been used in some countries to manage revenue shortfalls in times of rising oil prices. However, a fund that has not accumulated large funds before the recent oil price increase would be unable to smooth prices without an initial transfer from the government.

Have a Future Generation Fund

Putting some of the revenue generated from oil and gas exports for future generations, is a way of cushioning oil-rich countries against plummeting into poverty once the oil reserve dries up.

For example, when Chad constructed a US$3.5 billion Chad–Cameroon Petroleum Development and Pipeline Project which was completed in 2004, Chad was required to deposit 10 per cent in a “future generations” fund to provide Chad with revenues after the exhaustion of the oil reserves. However, in December 2005, Chad’s National Assembly abolished the future generations fund and diverted money away from poverty-mitigation efforts to arms purchase. The World Bank responded by suspending US$124 million in loans. In July 2006, the two sides reached a compromise, which specified that the Chadian government would commit 70 per cent of revenues to development programmes and 30 per cent to government expenditures. Some have called the Chad experiment a prima facie failure; others maintain that after only a few years it is still too early to judge.

One of the key concerns is that African governments that are major producers of oil and other minerals do not receive sufficiently large rents or revenues from the production of these extractive products.

This has been attributed to a number of reasons, including contracts and regimes that are not designed to extract maximum rents due to inherent government corruption; and mineral policies that are designed primarily to promote and attract investments and have not evolved with changing global dynamics and national interests.

If these governments implement appropriate and modern tax regimes for mineral resource extraction like a mineral tax system, different from the general tax system, they will be able to explore and invest while securing a fair share of revenues for public use.

However, care needs to be taken such that the tax regime adopted is symbiotic in that it still fosters interest in exploration and investments while benefiting the nation.

Another way for African governments to cushion themselves is to ensure more sustainable development. According to an AfDB report, most African countries lack sustainable resource development strategies and policies that would aid sustainable extraction of oil and other minerals.

One of the features of many countries that are endowed with abundant natural resources is that they save less than what is expected, considering the rents obtained from extracting and selling natural resources.

If the countries saved more, they would grow at a sustainable and faster rate. To gain a better understanding of sustainable development, it is useful to examine the concept of genuine saving.

Genuine saving is defined as public and private saving at home and abroad, net of depreciation, plus current spending on education to capture changes in intangible human capital, minus depletion of natural exhaustible and renewable resources, minus damage of stock pollutants (CO2 and particulate matter).

Genuine saving corresponds to an increase in the wealth of a nation. According to Hartwick rule, any depletion of natural resources or damage by stock pollutants must be compensated for by increases in non-human and human capital. This rule of zero genuine saving can be seen as a rule of thumb or motivated by max–min egalitarianism.

According to the World Bank, it requires that resource-rich countries adopt a strategy for transforming their natural resource wealth into other forms of productive capital. Resource-rich countries in Africa therefore need credible and transparent rules for sustainable consumption and investment to ensure that exhaustible natural resources are gradually transformed into productive assets at home or abroad.

Furthermore, countries with high population growth rates need positive rather than zero genuine saving rates to maintain constant consumption per head. They thus need to save more than their exhaustible resource rents—but only rarely manage to do so.

Analysis suggests that resource-rich countries with negative genuine saving, such as Nigeria, would experience increases in productive capital by a factor of five or four if the Hartwick rule were applied.

Effectively, for countries with negative genuine saving, the erosion of their natural resource wealth exceeds their accumulation of other assets. They squander their natural resources at the expense of future generations without investing in other forms of intangible or productive wealth. This is an unfortunate feature of several resource-rich African economies.