The first case of the coronavirus was confirmed on February 25, via an Italian carrier who works in Nigeria and flew into the nation’s commercial city, Lagos. 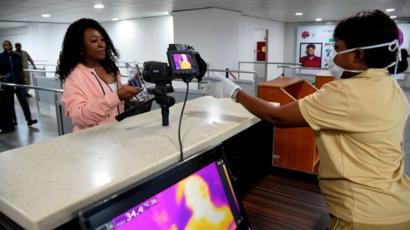 When Nigeria announced its first positive coronavirus infection African countries are now on guard as this has been a wake-up call for nations to strength their surveillance as well as disease containment.

The first case of the coronavirus was confirmed on February 25, via an Italian carrier who works in Nigeria and flew into the nation’s commercial city, Lagos.

According to information from BBC, Nigerian authorities commented that the “patient zero” is who is being treated in a hospital within the city, is stable and with no serious symptoms.

On the larger scale, Egypt and Algeria have also confirmed cases of the virus, while Kenya—whose authorities were debating on flights cancellation to China have given a court order to suspend flights from China, on February 28.

On a global scale, more than 2,800 people have died and more than 83,000 cases of coronavirus have been confirmed in more than 50 countries.

The biggest economy in the continent valued at $397 billion by the World Bank, saw rather troubling scenarios, as soon as the first case in Nigeria was announced, stock markets took a pounding amid fears of a global recession, according to information from Aljazeera.

However, Nigeria being the most populous nation with more than 200 million people, and with its health care network being rated among the worst in the world in terms of access and quality (142nd out of 195 countries), according to a 2018 study by Lancet, serious concerns ought to rise, to whether the nation can contain this deadly virus.

So far, the biggest challenge posed to Nigeria’s health sector, is to ensure the virus does not percolate to other nations with a weaker economy and governing muscle.

Also, it is utterly crucial to factor in the new development of the virus, as Italian medical authorities argue that, the new coronavirus may have circulated in northern Italy for weeks before it was detected.

Hence, can Africa–Nigeria afford this?

According to BBC, Nigeria is ready to deal with the epidemic, prepared to deal with it, and yet the Health Minister Osagie Emmanuel Ehanire commented that the nation has four laboratories where patients can be tested.

On that line, the Nigerian authorities have said that about 60 doctors have been deployed to Lagos main airport to support the screening effort. And yet the nation is not planning to halt flights from affected countries, nor planning to quarantine those travelling into the country.

Nigerian health authorities are advising people to regularly and thoroughly wash their hands with soap and water, and use alcohol-based hand sanitizers, to avoid contracting the virus.

Further, people have also been told to stay home if they have persistent coughs and sneezes, and contact authorities if they have any concerns.

However, the president of the Nigeria Medical Association has expressed fears over the safety of health workers in the country.

However, despite Nigeria being widely praised for its efforts to contain the Ebola outbreak in 2014 which killed more than 11,000 people in West Africa, still, the nation stands to be affected much as the virus symptoms detection have evolved.

According to information from the New York Times, studies have shown individuals who are infected with the coronavirus can spread it even though they have no symptoms.

The World Health Organization (WHO) had warned that Africa’s “fragile health systems” meant the threat posed by the virus was “considerable”.

New York Times, reported that the coronavirus fears are ascending towards tipping the global economy into a recession, handed the stock market its largest weekly loss since the 2008 financial crisis.

Coronavirus fears have wiped out almost $6 trillion off the global financial market. South African rand has demonstrated the economical hurt for Africa, and Nigeria could be next.

Switzerland has a ban against congregations of more than 1000 people until March 15, hence—with the population and interaction scenarios in Nigeria, such approach could be vital, considering the magnitude of the outbreak and impacts in the long-run, especially for Nigeria’s health industry.

WHO concerns on Africa, ought to be not taken for granted by African governments as, WHO noted that, porous borders, a continuing flow of travellers and poorly resourced healthcare systems meant the risk of an outbreak across Africa was “very, very high” and raised significant concerns about the ability of “fragile health systems” to cope.

On the side of the aisle, Kenya (building an isolation centre in Nairobi) and Tanzania (urging people on precautionary issues) have taken a rather serious note on enhancing their abilities to contain the virus.