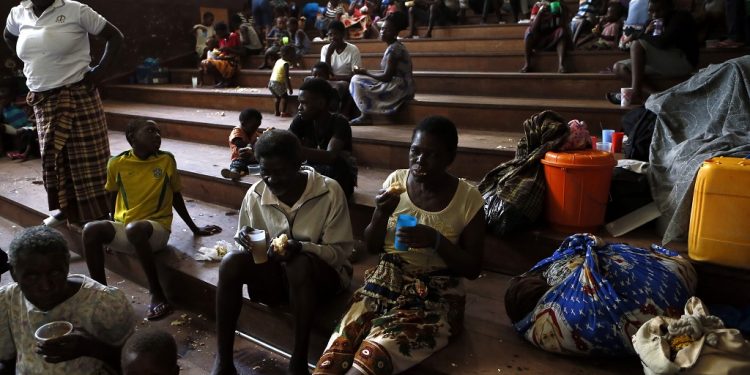 Displaced families and victims of Cyclone Idai at the Samora Machel Secondary School which is being used to house victims of the floods in Beira, Mozambique. Mozambique faces Cyclone Kenneth just weeks after Idai while Malawi waits for heavy rains from the cyclone. [Photo/ AP/Phill Magakoe]

by Njenga Hakeenah
in Countries, Mozambique, Tanzania
0
Share on FacebookShare on LinkedIn

At least three people have been confirmed dead in Comoros in the aftermath of Cyclone Kenneth which has made its landfall in Mozambique which is still recovering from aftershocks of Cyclone Idai.

Authorities in the East African island nation said on Thursday that Kenneth caused widespread power outages in the northern part of the main island, Grande Comore.

Other areas that were affected by the cyclone’s winds were the capital Moroni and the island of Anjouan.

Mozambique is recovering slightly over a month after Cyclone Idai flattened the port city of Beira through flooding.

The South African Weather Service says that Cyclone Kenneth could bring intense rains to Mozambique until late Monday evening. This could increase the risk of flooding.

Cyclone Kenneth is expected to bring heavy rains and flooding to north-eastern Mozambique, which was not hit by Cyclone Idai.

Mozambique is on high alert and already compulsory evacuations have begun in the northern region of the country where Kenneth is expected to make landfall by early Friday.

The National Directorate of Water Resources has warned that the water basins of Rovuma, Messalo, Montepuëz, Megaruma and Lūrio may rapidly increase and overflow. The directorate has recommended that people living in areas at risk of flooding and landslides to move to safer and elevated areas.

If the water basins overflow, more than 70,000 people will be affected.

Relief Web reports that there is a moderate to high risk of floods and erosion in the cities of Pemba, Nacala Porto and Nacala-A-Velha, possibly affecting 10,000 people.

There are also concerns that the Chipembe dam could be affected.

Tanzania is also on high alert since increased rain is expected in Dar es Salaam, Tanga, Pemba, Lindi and Mtwara regions, the south coast of Tanzania and around Lake Victoria.

The Kenya Meteorological Department has dismissed as false claims that the cyclone would batter the Kenyan Coast.

“It is FALSE that cyclone Kenneth will hit the Kenyan Coast. By the laws of physics, Cyclones cannot come this close to the equator. Landfall will be northern Mozambique,” stated the department on Twitter.

The department warned that the country could, however, experience effects of the cyclone in the form of enhanced rainfall over parts of Isiolo, Western Kenya, Samburu and Nairobi.

The department says that the rainy season will be shorter than normal adding that the current wet weather in some parts of the country will end in the second week of May.

In Malawi, the Government has issued a statement saying it expects enhanced rainfall throughout the country and in particular along the lakeshore.

The Department of Climate Change and Metrological Services says that the cyclone will make its landfall by the end of this week.

According to the Director at the department, Jolam Nkhokwe has cautioned those living along the lakeshore and flood-prone areas to follow weather forecasts since the cyclone will bring heavy rains and possible floods in some areas.

Reconstruction in Malawi after Cyclone Idai

Malawi’s recovery and reconstruction plans in the aftermath of Cyclone Idai have received a boost from the African Development Bank (AfDB).

AfDB is supporting the country with an emergency relief package and measures to combat the effect of climate change in the Southern African region.

The Bank’s Vice President for Corporate Services and Human Resources, Mateus Magala, led a delegation to Lilongwe this week to discuss the institution’s intervention plans with public and civil society officials in Malawi.

Magala met with government officials in Lilongwe, including the Minister of Finance, Economic Planning and Development Goodall E. Gondwe, his Homeland Security counterpart Nicholas Dausi and the Governor of the Reserve Bank of Malawi Dr Dalitso Kabambe.

AfDB has already availed USD250,0000 to Malawi, from its Emergency Relief Fund, for the purchase of emergency food items to avert hunger following the loss of crops damaged by the severe floods.

AfDB’s Climate Fund will also release USD150,000 to Malawi to enable authorities to assist communities and internally displaced persons impacted by the cyclone.

The Bank’s long-term plans include designing and developing mechanisms for climate insurance and mitigating climate change.

Close to sixty people have died, and about 1 million persons across 15 districts displaced by the severe floods, mostly in the south of the country, where entire villages were submerged in water.

Private sector activities and operators in the land-locked nation of about 18 million people were also severely impaired by the cyclone.