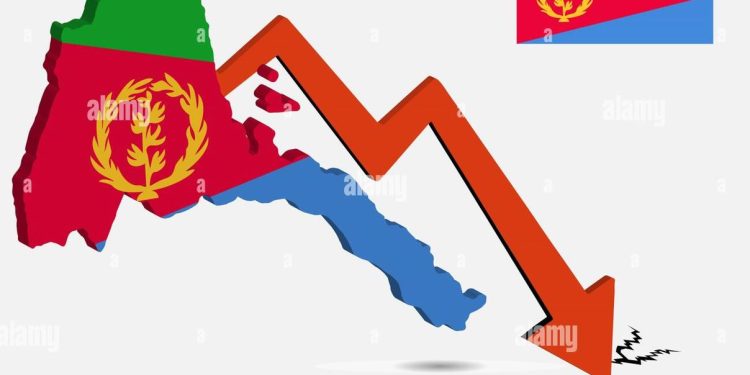 The country maintains archaic political and economic systems to the detriment of its people.

The horn of Africa country has an archaic system of governance which has done little to spur economic growth. Added to its troubles the country has an unsustainable debt load.

Eritrea’s debt stands at 175 per cent of its GDP.

This is very high for the agriculture-based economy.

Eritrea is an outlier on the African continent. Unfortunately for the Horn of Africa country, it is not for good reasons. The nation has held on to a counterproductive form of government which has retrogressed the country economically and kept its people in poverty.

The country maintains a political system which is largely autocratic in nature and is not a democracy by any stretch of the imagination. The country was at war with Ethiopia and only recently managed to broker a peace deal which is no more than a truce to fight another day.

Eritrea country is also in the throes of a civil war. The government is repressive and civic society does not have the space to express its concerns or protest the current government without running the risk of arrest. This model of government is not uncommon in Africa but is becoming increasingly outmoded by countries that have recognized that democracy and the rule of law are a necessity for economic progress and development.

The World Bank in its country overview of Eritrea says that the nation’s recent economic growth performance statistics have been affected by volatility which is because of its dependence on rain-fed agriculture. The agriculture sector contributes 33 per cent to the country’s overall gross domestic product (GDP).  Eritrea’s economy depends on agriculture, services, and mining.

The World Bank in 2018 reported that the economy recovered to growth rates of 12 per cent after experiencing negative growth rates of -2.7 per cent from 2015 to 2018 because of frequent droughts and declining mining production.

On the inflation front, the World Bank reports that Eritrea has experienced negative inflation in the years 2016 to 2018. This deflationary trend in the economy followed what the multilateral institution called the exchange of currency in circulation in November 2015 which resulted in a monetary contraction. Deflation continued in 2018 as increased trade with Ethiopia resulted in further downward pressure on prices.

Furthermore, the World Bank reports that “Eritrea has significantly tightened fiscal policy to reverse the chronic deficits it suffered after the increase in regional insecurity in 1998. The fiscal surplus widened to around 11 per cent of GDP in 2018. This was largely achieved by a sharp drop in capital spending as well as some revenue measures.

However, fiscal pressures, both recurrent and wage-related are likely to mount. Short-term growth prospects remain challenging given fiscal constraints and limited opportunities under existing restrictions. The recovery in agriculture is expected to slow. The country remains in a difficult macroeconomic situation with an unsustainable debt burden (including arrears to the World Bank) and vulnerable financial and external sectors.

However, the economic outlook is potentially favourable in the medium term, reflecting the new mining operations coming on stream, but are also dependent on measures to relax restrictions on the private sector imposed and to reopen access to concessional development finance.”

It is not all good news in Eritrea as the multilateral institution notes that poverty remains widespread. Lloyds Bank Trade speaking of the country says that, “Eritrea is one of the world’s most closed countries. It was already facing a very difficult economic situation due to chronic droughts, a steep decrease in remittances from the diaspora, autarkic policies, and past tensions with Ethiopia when it was hit by the outbreak of the COVID-19 pandemic and a locust invasion.

The IMF predicts that the economy will grow by 4.8 percent in 2022 and will slow down to 3.8 percent. This growth will come from the resumption of services and higher exports from mining activities, and the construction of the Colluli potash project which is also known as Coface.

Universally it is agreed that Eritrea’s economy is vulnerable to shocks which in other countries could be managed. For example, in 2021 Lloyds Bank notes that the economy of Eritrea suffered a shock that badly affected its public finances after a locust invasion devastated its agricultural production. That a country can be set back economically through an invasion of pests harkens to a by-gone era and is not consistent with modern times. This development in 2021 is indicative of the country’s lack of economic diversification firstly, and secondly that its agricultural sector is still antiquated at best. Pests can be managed. It is also not necessary to be dependent on rain-fed agriculture in the modern era where developments in modern farming techniques are virtually climate proofing agriculture.

Nevertheless, Lloyds Bank reports that, “Higher revenues allowed the fiscal deficit to decrease from -5.2 percent GDP in 2020 to -4.8 percent GDP in 2021 (Coface). Despite the end of the support measures adopted by the government to help businesses and assist the most vulnerable households, fiscal balance is expected to remain in deficit in 2022 (-1.5 percent GDP) due to the state wage bill and capital investment in infrastructure (Coface). For all that it appears to be getting wrong in terms of political systems and economic vulnerability, on the face of it, Eritrea is a good debtor country if IMF statistics are to be believed. According to IMF estimates, public debt decreased from 184.9 percent in 2020 to 175.1 percent in 2021 and will further decline to 159.3 percent in 2022 and 149.5 percent in 2023 due to government efforts to accelerate debt servicing. The very high level of Eritrea’s public debt, which is mainly domestic and denominated in local currency puts the country in a situation of debt distress.

The matter of Eritrea’s sovereign debt is arguably where the country can be regarded an outlier on the continent for good reasons. Though debt levels relative to GDP are high to the extent that the country is considered overextended financially, its debt stock is denominated almost entirely in its own currency (save for the arrears to the World Bank mentioned earlier). Though the risk of debt distress is present Eritrea is positioned favourably compared to its African counterparts.

Most of the countries in Africa have their debt denominated in hard currency or US dollars. This makes borrowing expensive since the US dollar has been appreciating in value and interest rates have also been on the rise. Eritrea by borrowing exclusively in its own currency, the Eritrea Nakfa, is by sheer serendipity immune to the sovereign debt crisis headwinds that other African countries are experiencing presently.

The African Development Bank (AfDB) echoes the sentiments of the IMF about Eritrea’s economic outlook. The African multilateral institution noted the shock to the economy from the locust invasion and acknowledges that the economy of that country will grow owing to metal prices which remain high on the global markets. These elevated prices for commodities favour the economy of Eritrea. The AfDB, however, reports that due to the Russian-Ukraine invasion and its consequent impact on supply chains and the price of food, inflation in the country is expected to increase.

The financial sector of Eritrea is said to be small, and bank-based. The range of products and services from banks is limited and it is said that the amount of cash that individuals and businesses can withdraw from their bank accounts is strictly rationed. Another feather in the Eritrean economy’s cap is that according to the AfDB, …The fiscal deficit narrowed to 4.0 per cent of GDP in 2021 from 4.4 per cent in 2020, reflecting fiscal consolidation and a gradual pickup in public revenues with the economic recovery.

The fiscal deficit was financed by a drawdown on government deposits with the central bank. What this means is that the difference between what the government earns from taxes and its expenditures reduced over the period under review. The country was either able to increase its revenues or reduce its expenditures. In either case the outcome was favourable. Additionally, the nation’s current account surplus relative to GDP increased to 13.5 per cent in 2021 of GDP from 11.4 per cent in 2020. The robust current account performance was due to increased demand for metals and high metal prices.

Despite its surprisingly agile economic performance Eritrea is considered an economy in debt distress. The IMF considers its appropriate for a country to have its debt stock at 40 per cent of its GDP. Eritrea’s debt levels are at 175.6 per cent. To the country’s credit, its leaders kept the debt stock largely in local currency. Eritrea has almost no borrowings in hard currency or US dollars. This will be a crucial advantage in an environment categorized by a resurgent US dollar and rising interest rates. The country like every other country on the continent that is in debt distress needs to pursue export-led economic growth strategy and strengthening their domestic economy.

In the specific case of Eritrea, the country needs to develop its agriculture sector with the objective of making it climate proof.

This will require intensive agricultural infrastructure spending to mitigate the impact of droughts and locust invasions. Value addition to exports is not optional for countries in Africa, least of all Eritrea. The country produces agricultural products and metals.

Eritrea could earn more from its exports and strengthen its balance of trade position leading to it reducing the amount of debt on its books.

Also read: The role of banks in enabling AfCFTA