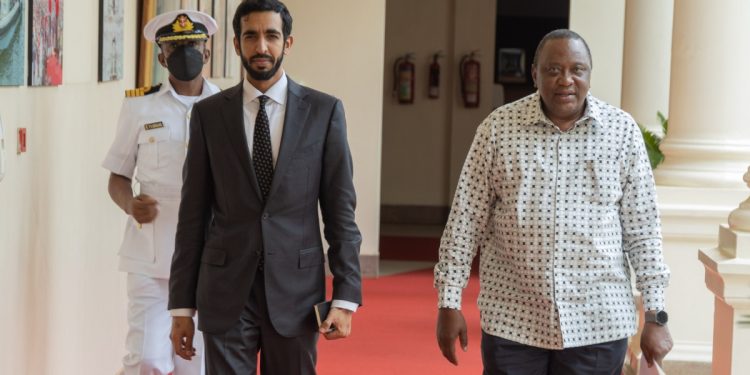 by Wanjiku Njugunah
in Countries, Industry and Trade, Investing
0
Share on FacebookShare on LinkedIn

Kenya wants to better its bilateral relationship with the United Arab Emirates (UAE).

On May 10, 2022, President Uhuru Kenyatta said there was a need to advance the relationship for the mutual benefit of the people of the two countries.

According to the head of state, the two countries should also explore new areas of cooperation for the mutual benefit of the countries.

He spoke when he received a delegation sent by His Highness Sheikh Mohamed Bin Zayed Al Nahyan, the Crown Prince of Abu Dhabi and Deputy Supreme Commander of the UAE Armed Forces.

“The objective of this meeting is to see how we can strengthen those areas of cooperation that have not been strong,” President Kenyatta said.

The meeting, which reviewed the status of the implementation of the economic and technical cooperation between the two countries, was a follow up to President Kenyatta’s working visit to the Gulf nation in February, where he met and held talks with the Crown Prince of Abu Dhabi among other engagements.

Among the areas reviewed at the meeting in State House included cooperation in bilateral trade, investment, finance and banking, tourism, agriculture, ICT, energy and petroleum.

The UAE delegation was led by the Gulf nation’s Minister of State, Sheikh Nahyan bin Shakhboot Al Nahyan who was accompanied by the Crown Prince’s Economic Adviser Abdul Rahman Neyadi, among other UAE Government officials.

As previously reported, Kenya is among some eight countries that the United Arab Emirates (UAE) wants to deepen trade ties with, even as it pushes to grow its status as the Middle East commercial hub.

In September 2021, The Exchange Africa reported that the UAE wanted to strengthen trade and economic ties with countries including India, Britain, Turkey, South Korea, Ethiopia, Indonesia, Israel and Kenya.

The Minister of State for Foreign Trade, Thani Al Zeyoudi, said UAE would pursue bilateral issues that include trade, foreign direct investment and sectors such as tourism.

That year, however, Saudi Arabia overtook the UAE as the leading source of Kenya’s oil imports, according to the Kenya National Bureau of Statistics.

However, the country is trying to double its non-oil trade and investments with Kenya.

As of 2019, data by the World Integrated Trade Solutions revealed that Kenya’s product imports from UAE included consumer goods as the leading type of import, followed by fuels, intermediate goods, plastic, capital goods and machinery and electrical items.

For Kenya, UAE is its primary market in the greater Gulf Cooperation Council (GCC), a market consisting of Kuwait, Oman, Qatar, Bahrain, Saudi Arabia and the United Arab Emirates, according to data by the Kenya Pavilion Director Expo Dubai 2020.

Commenting on Kenya as a trading partner the Dubai Chamber says the country is a market of strategic importance for both Dubai and the Chamber.

In a separate story, the United Arab Emirates announced in would establish an entrepreneurship and innovation centre in Kenya.

The announcement followed a conversation between President Kenyatta and His Highness Sheikh Mohammed bin Zayed Al Nahyan, the Crown Prince and Deputy Supreme Commander of the UAE Armed Forces.

The Emirates News Agency reported that H.E Sheikh Mohammed bin Zayed had directed the Khalifa Fund for Enterprise Development to build an innovation and entrepreneurship hub in Kenya.

The Kenyan innovation and entrepreneurship centre will focus on launching programmes, initiatives and workshops that will provide upcoming and established entrepreneurs in Kenya with guidance on incorporating innovation into their businesses to boost their Gross Domestic Product.