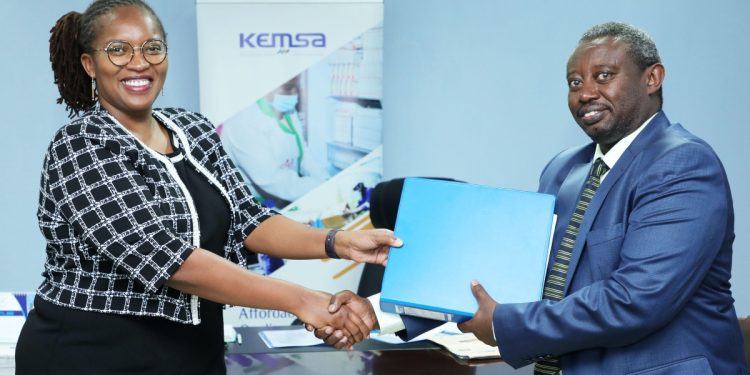 by Wanjiku Njugunah
in Countries, Industry and Trade
0
Share on FacebookShare on LinkedIn

In a statement seen by The Exchange Africa on May 23, 2022, the embattled state agency noted that the professional management services and corporate re-engineering expert has officially taken office after receiving office instruments from the immediate former Acting Chief Executive Officer, John Kabuchi.

The new CEO said she would maintain a consultative management approach and foster partnerships with all stakeholders.

She paid tribute to KEMSA staff, and operating stakeholders for their commitment to ensuring the authority transforms into an effective Health Products and Technologies (HPTs) supply chain agency.

“I have taken over as the CEO of KEMSA, and I am conscious of the immense duty and responsibility ahead. I pay tribute to the team running the show for their passion and dedication to duty. They have set a solid foundation for KEMSA transformation. I intend to accelerate the pace of reforms through a consultative, results-focused management approach with all our stakeholders from staff, suppliers, donor partners and clients,” Ramadhani said.

Ramadhani is a Seasoned human resources Management practitioner with over 19 years of experience in the fields of Human Resource Development, organisational transformation, process re-engineering and
implementation.

She holds a Master’s in Business Administration (MBA) from the University of Liverpool, Adaptive Leadership Certification from the Harvard Kennedy School and a Bachelor of Education from Kenyatta University.

She is a certified project management professional and a member of the Chartered Institute of
Personnel and Development (CIPD).

She has held several strategic and leadership positions in the health sector, both in the Public and Private sectors.
Before her KEMSA appointment, she served as the Aga Khan University Director Academy HR and Global Change.

While handing over the office instruments, Kabuchi confirmed that KEMSA had made positive reform strides to ensure its effectiveness. He confirmed that KEMSA has managed to reduce the order turnaround time (TAT) from 46 days in February 2021 to 14 days at the end of April 2022, with plans for further improvement.

While announcing Ramadhani’s appointment last week, KEMSA Chairperson Mary Mwadime said she was confident that the organisational transformation plan would be sustained and professionally executed.

“The Board is united in its resolve to facilitate the proper positioning of KEMSA as an effective Health Products and Technologies (HPTs) supply chain provider in the local public health space.”

KEMSA’s appointment is part of the reforms that the company started last year following allegations of mismanagement.

At the time, Mwadime said the board had scaled up organisational turnaround efforts to provide a solid foundation for the uptake of the Universal Health Coverage (UHC) goal, among other national healthcare development plans.

“A dysfunctional KEMSA slows down healthcare delivery goals and is a liability to the envisaged positive national healthcare outcomes, and the board is committed to facilitating reforms to set the authority on a recovery path. This will include structured engagements with several county governments to settle their outstanding bills amounting to more than KSh 6 Billion,” she said.

She disclosed that the reforms at the authority were part of the far-reaching recommendations outlined in several KEMSA restructuring reports, including the KEMSA Immediate Action Plan and Medium Term Reforms Working Committee (KIAPRWC) report. Commissioned by the board, the KIAPRWC report revealed challenges in critical functions.

The report confirmed that KEMSA was grossly underperforming and largely unable to meet clients’ urgent needs, particularly the delivery of essential Medicines and Products to the Counties, Referral Hospitals and Programs.

She added that the authority was suffering from below-par productivity, with the order fill rate standing at 18% against a target performance of over 90%.

She said some county governments had extended much-needed support to KEMSA by prioritising the settlement of bills to keep the authority’s cogwheels running as the organisational reforms to address systemic challenges.