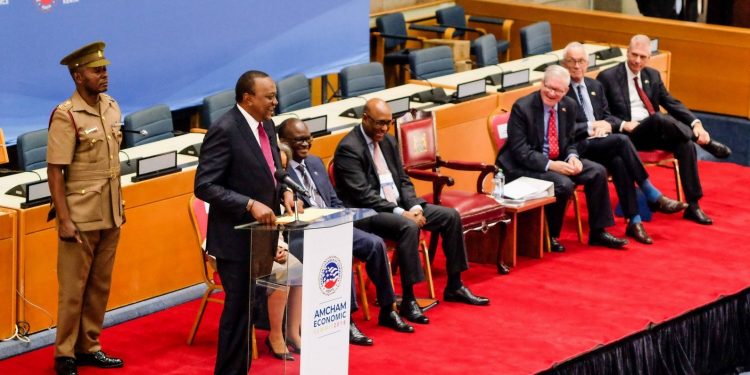 President Uhuru Kenyatta during the 2018 summit

American Chamber of Commerce (AmCham) Kenya annual Business Summit that will be held on November 4 - 5, 2018 in Nairobi with more than 200 American companies expected to participate

by Kimani Chege
in Industry and Trade, Kenya
0
Share on FacebookShare on LinkedIn

Kenya is preparing to host several American companies during the American Chamber of Commerce (AmCham) Kenya annual Business Summit that will be held on November 4 – 5, 2018 in Nairobi.  More than 200 American companies will participate in the meeting that seeks to explore investment opportunities in Africa.

The Summit, now in its second year is held in partnership with the Kenya and U.S. governments as well as the U.S. Chamber of Commerce and serves as an engagement platform for the U.S. and the greater East Africa region to focus on strengthening two-way, enterprise-driven, trade and investment, forging long-term economic ties and mutual prosperity.

AmCham Kenya Board President Phillipine Mtikitiki described this saying, “The Summit is an opportunity to present and discuss realistic, feasible, collaborative measures and ways in which American and local businesses can leverage the numerous opportunities available in the various sectors of the economies of the region and the U.S. for mutual benefit.”

The focus of this year’s summit is on East Africa basing it on the growing interest in the region as a single market and will see the participation of not only the host country, Kenya, but will also include representation from Tanzania, Rwanda, Uganda and Ethiopia. The program will feature doing business in-country forums, in addition to in depth sector forums on manufacturing, agribusiness, infrastructure, energy, health and the digital economy. Match making sessions within the program will also offer businesses opportunity to engage, transact, initiate and close deals.

AmCham Kenya Chief Executive Officer, Maxwell Okello, has noted, “The Summit provides a platform for direct business to business engagement. This enables partnerships to develop and transactions to take place, expanding markets and catalysing business growth which is the key to job creation and economic prosperity”.

In 2018, over 500 delegates representing a mix of 140 U.S. and Kenyan companies participated in the AmCham Summit. In attendance were also 70 U.S. government representatives and business leaders including members of the President’s Advisory Council on Doing Business in Africa (PAC-DBIA) who were visiting Kenya on a fact-finding mission.

Six commercial deals between Kenya and the U.S. worth $100million were signed during the Summit witnessed by His Excellency the President of the Republic of Kenya, Uhuru Kenyatta and the former Under Secretary of Commerce for International Trade, U.S. Department of Commerce, Gilbert Kaplan.

While attending the UN general assembly, President Uhuru Kenyatta attended a private sector forum hosted by the American Chamber of Commerce and attended by tens of top executives from leading US multinationals said Kenya is seeking sustainable business partnerships with American corporations.