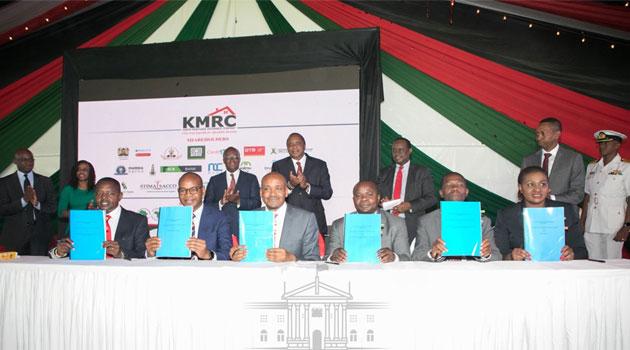 by Chacha Mwita
in Infrastructure, Kenya
0
Share on FacebookShare on LinkedIn

KMRC is a non- deposit taking financial institution under the supervision of the Central Bank of Kenya (CBK).

The company was incorporated on April 19, 2018 with the single purpose of providing long-term funds to primary mortgage lenders (banks, micro finance banks and saccos) in order to increase the availability and affordability of mortgage loans to Kenyans.

The company was established as a private public investment with majority ownership by the private sector at 80 per cent and government 20 per cent. Its current shareholders comprise: the national treasury and planning; eight (8) commercial banks; eleven (11) deposit taking Savings and Credit Co-operatives (Saccos) and one (1) microfinance bank.

As a non-deposit taking financial institution, KMRC which was launched by President Kenyatta this week will primarily be funded through debt and equity. KMRC equity capital will be invested to generate income to run the institution.

In order to re-finance portfolio of residential mortgages, KMRC will initially mobilize long term funding from International Development Finance Institutions through the National Treasury. In the medium term, and to ensure sustainability, it will issue bonds in the capital markets to raise funds to refinance mortgages.

“We will be going to the markets in one or two years of operation with a target of Ksh5 billion (US$49.4 million),” explained acting CEO Johnston Oletitia.

Its role will be to source loans from big investors and multilateral lenders and act as a pool from which mortgage lenders in the country can draw from at affordable rates.

What it means for the country

According to Oletitia, it will help lenders provide long term mortgage solution spanning between 15-20 years, improving affordability to majority of the low income earners.

“KMRC will promote standardized lending practices across market players due to set eligibility criteria for refinance, which will drive market efficiency and help develop the secondary mortgage market,” the State notes.

The company is a game changer in the market as it will support mortgages with a single digit interest rate, as low as five per cent, a 61.5 per cent drop from the current market average of 13 per cent.

“We are ready to start doing business. We are only waiting for a licence from the Central Bank of Kenya,” Oletitia said after the launch in Nairobi.

The entity has the backing of the World Bank and the African Development Bank (AfDB) which have already committed Ksh35 billion (US$ 345.5 million)-Ksh25 billion (US$ 246.8 million) and Ksh10 billion (US$98.7 million) respectively.

The government has pumped in Ksh1 billion (US$9.9 million) with shareholders pooling together Ksh1.5 billion (US$ 11.8 million).

KMRC is only but one of the schemes expected to support the government’s affordable housing pillar under the ‘Big 4 Agenda’, which also include food security, universal healthcare and expansion of the manufacturing sectors’ to increase its contribution to the GDP to about 15 per cent from the current 8.5 per cent.

The state is also counting on a National Housing Development Fund (NHDF) with support from the private sector, to put up at least 500,000 affordable houses by 2022.

“KMRC supports this agenda on the demand side by extending long-term funds to primary mortgage lenders to enable them avail affordable housing loans to the people. NHDF on the other hand was established to support the affordable housing agenda on the supply side by providing off-take arrangements through tenant purchase scheme and off-take guarantees to the developers,” National Treasury notes.

The latest development is a boost to the country’s mortgage market which has for long been performing dismally.

The uptake of housing mortgages in Kenya remains below its potential , President Kenyatta noted during the launch of KMRC, with CBK data showing that the total outstanding mortgage debt in 2017 stood at about Ksh223 billion(US$ 2.2 billion).

This represents only about 2.74% of GDP, which clearly shows that the housing mortgage business in Kenya is still very small.  South Africa, as for instance, boasts of a mortgage sector accounting for 31% of its GDP.

The affordable housing loans to be extended by primary lenders, with support from KMRC, will be capped at Ksh4 million (US$ 39,486.67) in Nairobi and Ksh3 million (US$29,615) in the rest of the country.

“We expect the refinance company to significantly contribute to the development of the housing finance market in Kenya and help reverse the low mortgage penetration, by increasing the number of mortgages from the current 26,000 to over 60,000 by the year 2022,” the President said.

Kenyatta is keen to use the affordable housing scheme to address the country’s housing deficit which currently stands at 150,000 units annually on an annual demand of 200,000. This means only 50,000 units are availed to the market each year.

“As we continue to experience the dividends of our growing population, the housing supply has, over the years, not kept pace with the concurrent growth in the demand for houses.  As a result, this has led to a huge housing deficit, particularly for the lower income households,” the President said.

The State has kicked off the affordable housing programme with the construction 1,370 houses at Parkroad Estate in Ngara , Nairobi, with the first phase of 228 units expected to be ready by September this year.

The Parkroad Estate housing project in Ngara is part of the Government’s plan to construct 500,000 #AffordableHousing units by 2022 under the pillar of the #Big4Agenda. The first phase of 228 units is expected to be ready by September this year @HousingUrbanKE @BomaYanguKE pic.twitter.com/RtbEufIgRa

Kenyatta said the government is making deliberate interventions in the housing sector to make it more responsive to middle and lower income segments of the population.

“The intervention is based on recognition that reaching the goal of adequate, safe and affordable housing for all, especially the lower income group, requires a fundamental rethinking of the traditional approach used in the past,” he said.