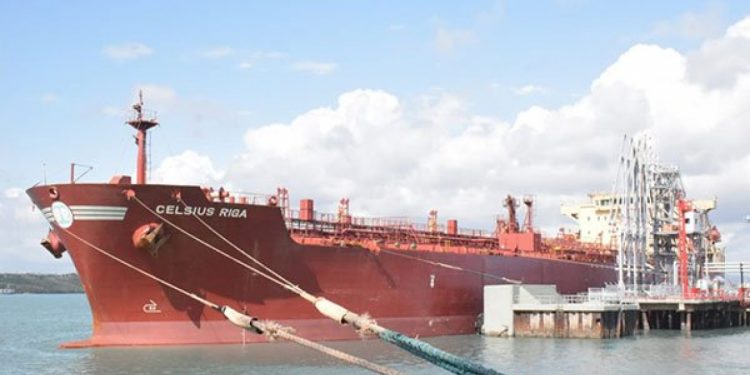 President Uhuru Kenyatta led the country in flagging off the oil tanker-Mv Celsius Riga which will deliver 200,000 barrels to Malaysia

by Chacha Mwita
in Kenya, Oil&Gas
0
Share on FacebookShare on LinkedIn

Kenya has finally sent its first crude oil into the global market marking a major milestone in the country’s quest to become a net oil exporter.

The oil tanker-Mv Celsius Riga will deliver the consignment of 200,000 barrels in Malaysia.

Kenyatta has since called for peace, warned against corruption and urged for prudent use of resources for the benefit of all Kenyans and the country.

“The government will ensure that the local communities benefit from the oil,” the Presdeint said, “I urge all those in charge to avoid any misuse of the resource that would deny others Its benefit.”

Petroleum Cabinet Secretary John Munyes said plans are underway to construct a pipeline between Turkana and Lamu Port to ease transportation of the commodity.

READ ALSO:Pipeline deal inked as first Kenyan oil heads off to the market

“The 2020 plan for a pipeline connecting Lokichar-Lamu is on track,” Munyes said, calling for commitment on land and water to enable the project move faster.

The news was not only received by cheers from members of his cabinet, but thrilled the entire country as it gave hope into the journey of becoming a net oilexporter.

Kenya’s first deal was concluded on the afternoon of August 1―200,000 barrels at a price of US$12 million.

Tullow and its partner Africa Oil discovered commercial oil reserves in the Lokichar basin in 2012.  Lokichar is found in Turkana County, one of Kenya’s 47 counties in the northern part of the country.

Since then, over 40 exploration wells have been drilled in South Lokichar basin by Tullow and its partners with over half a billion barrels of recoverable oilidentified. US$2 billion has been spent on appraisal.

A number of other discoveries have been made in the region in an exploration journey that continues to date. The exploring partners have developed a number of blocs with three currently at an advanced stage.

They are named Amosing, Ngamia and Twiga. Under a deal reached earlier this year, parties involved agreed that the fields should be developed as the foundation stage of the development with 60,000-80,000 bopd (barrels of oil per day).

According to Tullow, the Amosing and Ngamia fields have estimated contingent resources of about 560 million barrels, with plateau production potentially reaching 100,000 barrels per day in 2022.

Plans are ongoing to invest in an export pipeline linking the oil fields to Lamu, where the government is constructing a 32-berth port, the country’s second major sea port after the Port of Mombasa.

This is under the US$24.5 billion Lamu Port-South Sudan-Ethiopia Transport (LAPSSET) Corridor Programme, eastern Africa’s largest and most ambitious infrastructure project.

The 892-kilometre crude oil pipeline is estimated to cost US$1.1 billion with a further US$2.9 billion needed for upstream operations.

Last year, Tullow hired Wood Group (Plc) to design the pipeline needed to pump crude from the Lokichar fields to Lamu, with commercial production and exports anticipated for 2021/2022.

Due to the waxy nature of Kenya’s crude, the 18-inch pipeline will need to be heated all the way to the port facilities where loading will be taking place.

“Extensive environmental impact and social assessments are underway. The pipeline will be buried to reduce its impact on communities and wildlife,” Tullow and its partners have said.

The heads of terms have been signed and the Joint Venture Partners (JVP) are now focusing their efforts on securing financing for the pipeline while continuing to progress the ongoing Front-End Engineering & Design (FEED) and Environmental & Social Impact Assessment (ESIA) work, which will lead to the selection of contactors ready for Final Investment Decision (FID).

The Heads of Terms Agreement was signed at the Ministry of Petroleum and Mining, in Nairobi in June, by Mining and Petroleum Cabinet Secretary John Munyes, Tullow Kenya Managing Director Martin Mbogo together with signatories from the JVP.

Commenting on the agreement, Mark Macfarlane, Executive Vice President Tullow Plc, said: “The signing of the Heads of Terms is a major milestone in the commercialisation of Kenya’s first oil development. Project Oil Kenya is expected to be the largest ever private sector investment in Kenya and these Heads of Terms underpin the long-term and mutually beneficial partnership between Tullow, our Joint Venture Partners, and the government of Kenya and is a major step towards delivering FID for the project.”

“In a few years’ time, the pipe will be nearing development stage,” the government has confirmed.

Key to the success of the country’s oil project will however be the adoption of a factory drilling approach.

Here, all the wells and the flow lines will be brought into a large Central Processing Facility (CPF) where oil, water and gas get separated; gas is used for power generation, water is injected back into the wells and the oil is moved through the pipeline for export.

The integrated CPF will be spread over 433 hectares. It will contain the main oil production facility support services as well as crude oil tanks and pump station, where the crude oil will be pumped from.

Away from infrastructure, Tullow and its partners have built strong relationships in Turkana region and Lokichar which has seen an increase of local entrepreneurs (local economy and human capacity) .

The company has opened up jobs, supply contracts for local groups, corporate social responsibility projects including water and schools among other benefits.

“Tullow and her partners have done a very good job in a very challenging environment…The other good job they have done is creating some sort of enterprise for local people,” Principal Secretary to the Ministry of Foreign Affairs, Andrew Kamau, notes.

Besides developing local entrepreneurs, up to 10,000 jobs are expected to be created over the life time of full field development.

“I feel very proud to be seeing the sort of partners that we have, a government that is supportive, and I hope that the legacy when this is all done is to get Kenya to an oil exporting status and improve the social economic benefits to Kenyans as a whole,” Tullow Kenya Managing Director Martin Mbogo said.

In its pursuit for oil, the government signed an Early Oil Pilot Scheme (EOPS) agreement with Joint Venture Partners (Tullow Oil, Africa Oil Corp and MaerskOil) on March 14, 2017 allowing all upstream contracts to be awarded.

The EOPS also included trucking of 600 barrels of oil per day to Mombasa with a target of 200,000 barrels for the first export.

President Kenyatta flagged off the first four trucks with 156 barrels of crude oil from Lokichar on June 3, 2018, setting off the early oil scheme. The crude oil has since then been stored at the country’s defunct oil refinery in Mombasa, formerly run by the Kenya Petroleum Refineries Limited (KPRL).

It has now been turned into a storage facility managed by Kenya Pipeline Company (KPC), a state agency mandated with handling and transportation of petroleum products through a diverse pipeline and storage system.

KPC has upgraded the storage facility ahead of handling the oil exports traffic. The upgrading done in partnership with Chinese firm Zozen, include installation of an oil fired steam boiler to keep the waxy crude oil fluid for loading into vessels.

Tullow Oil, with its partners and the government, have picked trading company ChemChina UK Ltd as the buyer of Kenya’s first shipments.

“ChemChina UK Ltd has been selected as the buyer for the first crude oil exports,” Petroleum Principal Secretary Andrew Kamau said in a recent statement.

ChemChina UK’s initial purchases are expected to be small-scale, with full commercial shipments due to begin once the pipeline is constructed.

As exports come to fruition, all eyes will now be on how the country will utilize and manage its oil resources to ensure it does not turn bloody.

The government is aware of the conflicts involved hence in March this year, President Uhuru Kenyatta signed into law a Bill outlining how oil revenues will be shared between the national government, counties and local the communities.

Under the new Petroleum Act, county governments from where oil is produced will enjoy 20 per cent of revenue from petroleum operations, while five per cent will go to local communities living around the oil fields.

The national government will retain the bigger chunk of 75 per cent of the revenue.

The country is also in the process of creating a sovereign wealth fund which will handle revenues from oil, gas, mineral and other natural resources.

“We are a country blessed with natural resources, which, if properly managed, will transform in a big way our nation and the welfare of our people,” President Kenyatta said during a State of the Nation address.

And as Tullow Kenya development director, Madhan Srinivasan puts it: “The project of this nature will put Kenya in the oil and gas export market.”