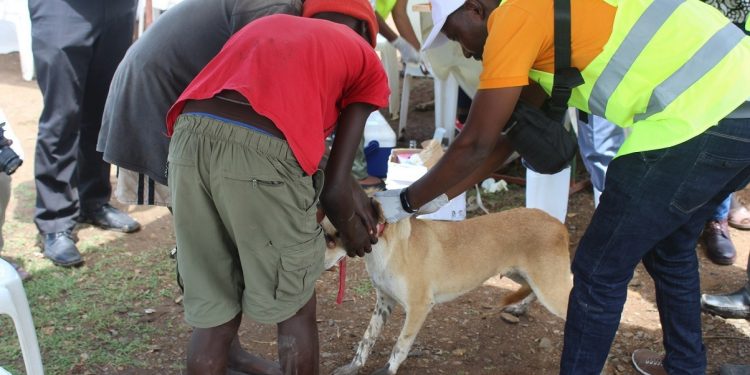 Vaccinating dogs by Kenya animal health professionals during the WVD. Kenya’s animal health industry has launched a new body that will articulate and address the needs of industry players. [Photo/Kenya Veterinary Association]

by Njenga Hakeenah
in Health, Kenya
0
Share on FacebookShare on LinkedIn

Kenya’s animal health industry has launched a new body that will articulate and address the needs of industry players.

It will be responsible for among other things, promoting public education and awareness on the proper use of animal health products and encouraging and promoting fair practice within the industry.

The Veterinary Medicines Directorate (VMD) was gazetted in 2016 and is now mandated to oversee the manufacture, importation, exportation, registration, distribution, prescription and dispensing of veterinary medicines.

Following this, key industry players – particularly in the private sector identified a need to have an agency that would engage with the government and other stakeholders on their behalf on issues of animal health provision.

Previously, this role was played by the Agrochemicals Association of Kenya under its animal health sub-committee.

Protecting and promoting interests of the animal health industry

Speaking during the launch, VISAK Chief Executive Officer, Eric Kimunguyi said the association will work tirelessly to protect and promote the interests of its members.

“We will work with the government and other agencies to ensure that issues affecting all stakeholders in the animal health business are well represented so that our members continue to provide safe veterinary inputs within a fair and just environment,” said Kimunguyi.

He urged all companies dealing with animal health products and related equipment to be part of VISAK.

Livestock Department Principal Sectary, Harry Kimtai, said, “ We would also like to inform the industry that the drug registration guidelines that were developed in partnership with VISAK will soon be adopted by VMD Council and be launched.”

He added that this is a big step for VMD and Animal health industry as the registration guidelines will enhance faster dossier preparation by the industry and facilitate faster dossier evaluation by VMD and therefore drastically shortens the period taken to register products.

“The drugs registration timelines have been drastically reduced to less than 1year to be granted Marketing Authorization, and at the same time local GMP Audits have been taking place since 2018 and those who comply with the standards will be issued with a GMP Certificate valid for 3 years as per WHO-GMP standards requirements,” said Kimtai.

Accessing veterinary medicines in the market

VISAK Chairman Wachira Mureithi says that before the establishment of VMD, the industry experienced a lot of challenges in the Registration of products. The process, he said, could take as long as four years before they could receive the first response to the application.

“At the moment, we are glad to say that drugs registration has been one major achievement by VMD as responses to our applications come in within 3-4 months which is really a very short time lag compared to the previous 3-4 years,” he added.

VISAK is targeting a time when full marketing authorization will be granted within six months.

Mureithi says this will FastTrack the placement and availability of the much needed veterinary medicines in the market.

The Drugs Registration Guidelines that were prepared in partnership with VISAK should also be immediately adopted by the VMD Council so that the industry stakeholders can authoritatively use them and train their Regulatory staff members on the same.

Mureithi accused the tax collector of wrongly declaring consignments to get more taxes.

He said there are many occasions when KRA officers may want to declare Multivitamins injectable formulations as ‘Food Supplements’ as opposed to medicaments so that they charge duty and VAT on the same.

“In such cases we expect VMD to intervene and competently adjudicate on the matter,” he added.