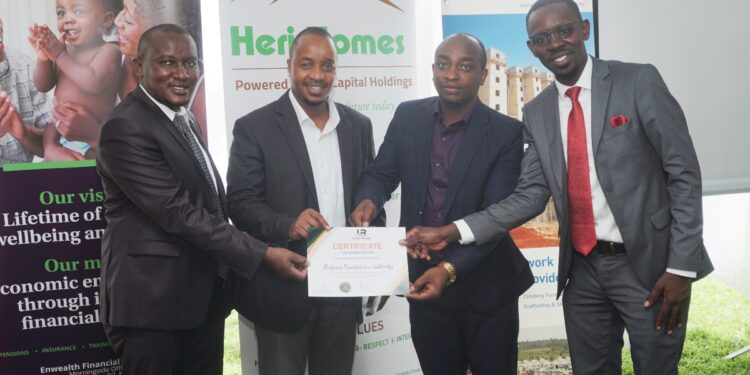 The lack of cost-effective construction methods and out-of-date technological solutions are among the many reasons why players in Kenya’s real estate market are unable to meet the rising demand for homes.

The CEO of Heri Homes, Kimotho Kimani, says that the construction industry can overcome its problems by using modern methods like aluminium formwork.

Due to basic constraints on both the demand and supply sides, the World Bank estimates that Kenya requires at least 2 million low-income houses yearly, but only generates less than 50,000 of them.

Aluminium formwork, which is becoming more popular in Kenya, according to Kimani, has already helped speed up construction on certain local projects.

The brick-and-mortar method would take 24 months to construct an eight-story building, he asserted, but with these new construction technologies, it would only take eight months.

“With such a technology, homeowners would be able to move into their new homes sooner than they would have otherwise,” he said.

Since roads are being built, title documents are being issued faster, and value-added tax refunds and relief on cheap housing are being offered, says Legacy Ridges Ruiru Chairman Kimani, the government has created an enabling climate for the development of inexpensive housing.

The aluminium formwork concept was introduced to Kenya by the South Korean firm Kumkang Kind, which already has many projects in the works across the continent.

At least nine developers in Kiambu, Eldoret, and Nairobi operate with the Korean firm locally.

KumKang Kind is also collaborating with developers in Ethiopia, Ghana, and Algeria outside of Kenya’s boundaries.

In his role as Business Development Director for Kumkang Kind East Africa, Sam Muhia advised the construction industry to be receptive to new ideas, such as using aluminum formwork as a construction component.

The building technology has been implemented by most western countries, according to Muihia, so that inhabitants can have affordable homes.

When aluminium formwork has been around for more than 40 years, “we cannot continue to employ brick and mortal methods,” Muihia remarked.

Methods of construction that are prohibitively expensive

Malei Nthiwa, Managing Director of Bola Properties, echoed this sentiment, urging an increase in the usage of green solutions in Kenya to alleviate the housing shortage that affects so many of the country’s citizens.

While affordable housing has been a continuing goal of President Uhuru Kenyatta’s second and final term as head of state, nine out of 10 Kenyans lack a house they can call their own, according to a study performed by Bola Properties.

Nthiwa proposed that green solutions be scaled up in Kenya in order to ease the load on the country’s millions of people who are looking for low-cost housing.

Aggregation of the market

Meanwhile, Nthiwa advised the industry to implement market aggregation in order to promote the construction of affordable housing in Kenya. Nthiwa says that it would be impossible to provide low-cost housing unless all stakeholders worked together.

Every project requires a funder, a team of professionals, legal assistance, and suppliers. “Affordable housing will remain a pipe dream as long as the building industry as a whole does not come together and debate on how to bring this sector forward,” Nthiwa said.

Pre-stressed concrete, precast concrete, and water and solar power solutions are just some of Bola Properties’ many inexpensive housing solutions.

The panellists talked at a meeting of building industry stakeholders in Kenya to discuss how to bring affordable homes to the country.

At the start of his final term as president, President Uhuru Kenyatta unveiled his Big 4 Development Agenda.

Participants in the housing sector gathered at the Safari Park Hotel for an affordable housing solution forum. They also talked about the mortgage market and the role that the National Construction Authority, cooperatives, Sacco’s, and banking institutions play in housing finance.

The Jubilee administration’s Big Four pillars include affordable housing, which is intended at improving Kenyans’ living conditions and allowing Kenyans an opportunity to buy their own homes.

Most Kenyans were unable to continue investing in the housing scheme because of the Covid-19 outbreak. One way to speed up the housing project is through initiatives like the mortgage markets and stakeholder engagement in affordable housing, which President Uhuru Kenyatta lifted the national dark to dawn ban.