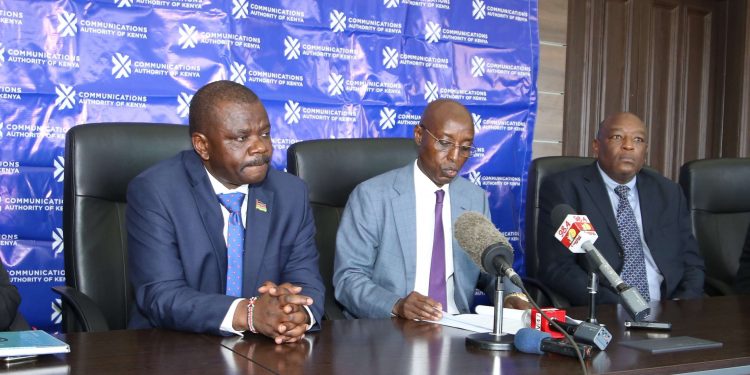 by Kimani Chege
in Kenya, Telcos
0
Share on FacebookShare on LinkedIn

The Communications Authority of Kenya (CA) has appointed Mercy Wanjau as the acting Director-General to replace Francis Wangusi whose tenure has ended, despite the former refusing to vacate office noting that the process to appoint a replacement.

The CA Board of Directors Chairman Ngene Gituku, however, said the appointment has been made to ensure that CA continues to discharge its mandate seamlessly.

Mercy Wanjau is a commercial lawyer, a regulatory and governance professional currently working with the Communications Authority of Kenya as the Director of Legal Services and Board Secretary. She has been involved in designing and harmonizing policy and regulation in the ICT sector at the local, regional and international level for over 15 years.

“Given the strategic responsibilities vested on the Authority, we are committed to ensure there is no leadership vacuum and that we deliver on our vision of ‘A digitally transformed Nation,” Mr Gituku said.

Mr Gituku added that the appointment was done after extensive consultation with the relevant stakeholders and that he has confidence that Mrs Wanjau has what it takes to coordinate the duties relating to the Director General’s office in the interim pending the appointment of a Director-General on a substantive basis.

Prior to this, Mrs Wanjau consulted with KPMG South Africa, Pricewaterhouse Coopers Kenya and also had a stint in commercial legal practice. She has also served in international secondment at the UNAT THE Un-International Telecommunications Union.

She serves on the Board of the SOS Children’s Villages and is a Council Member of the Institute of Certified Secretaries (Kenya). She is a graduate of the University of Nairobi (LLB) Hons, University of Cape Town (LLM) and Strathmore Business School (AMP). Mercy is a certified Secretary and a Certified Professional Mediator. She is also an Eisenhower Fellow.

Mr. Wangusi assumed office in August 2012, having served in an acting capacity in the previous year.  He has had the unique opportunity and honor of serving at the helm of the Authority for two complete terms.

“There is no doubt Mr. Wangusi made his mark in the sector and will remain an important footnote in the history of the ICT industry for a long time to come. On behalf of the Board and management of CA, I wish Mr. Wangusi success in his next phase of life and in his future endeavors,” Mr Gituku said.

There are already court battles in the regulator’s desk on the validity of the appointment and the composition of the board. The Consumer Federation of Kenya, (Cofek), the consumer protection lobby recently moved to court to stop recruitment of a new director-general at the agency, saying the board spearheading the process is in office illegally.

“The 13-member board, led by Ngene Gituku, has no powers to recruit a new director-general for a state entity, adding that the process should instead be steered by an independent recruiting body,’’ Cofek boss Stephen Mutoro said.

In May, Activist Okiya Omtatah was victorious after a court blocked ICT Cabinet Secretary Joe Mucheru from appointing new members to the CA board following the expiry of current holders on April 29.

Wangusi has been known as a no-nonsense director who pushed through the digital migration in Kenya when all major news outlets boycotted the move, leading to them being switched off.