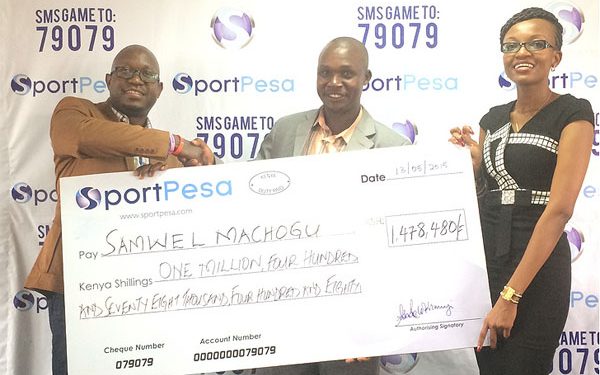 A SportPesa winner receiving a dummy cheque at a past event.

Why Kenya will not collect taxes from sports betting

The Kenya Revenue Authority (KRA) has hit a technical snag in its efforts to collect taxes amounting to more than Ksh2.7 billion (USD26.6 million) per month, accruing from betting wins.

This follows a court order issued by a magistrate’s court barring the taxman from accessing the monies.

This is per the budget  for the current financial year ending June 30, where  National Treasury Cabinet Secretary, Henry Rotich, had planned to have  taxes drawn from betting activities finance sports, art, cultural developments and the rollout of the Universal Health programmes.

The order issued by Senior Resident Magistrate Kivuti follows the 2014 filing of a suit by a Mr. Benson Irungu against Sportpesa Ltd trading as Pevans East Africa.

The suit sought to stop Sportpesa from deducting and remitting taxes arising from Mr Benson Irungu and any other person’s winnings.

Aggrieved by an earlier order stopping Sportpesa from deducting withholding tax on winnings from betting, KRA which had not been party to the case sought to be enjoined as an interested party while seeking to set aside the earlier orders.

The orders were subsequently overturned on March 29, 2019 allowing KRA to continue collecting due taxes from Sportpesa among other betting companies.

However, in a surprising and frustrating turn of events for KRA, Mr Benson Irungu moved to court a fortnight ago seeking orders for the stay of execution against the orders granted last  March 29,  by Senior Resident Magistrate Isaac Orenge.

The new orders by Senior Resident Magistrate D. M. Kivuti were heard and issued in KRA’s absence and were only brought to the authority’s attention last week Thursday (April 18).

KRA’s counsel led by Acting Commissioner Legal Services, Mr Paul Matuku and assisted by David Ontweka and George Ochieng, have however managed to file their responses and submissions seeking that the orders granted by Senior Resident Magistrate D. M. Kivuti be vacated pending the hearing of the inter-partes case.

At this week’s hearing, advocates appearing for Mr Irungu requested the Court for more time to file their replying affidavits following KRA’s submissions.

The Senior Resident Magistrate D. M. Kivuti however declined to vacate the orders issued on April 11, 2019, directing all parties to file their responses and appear for hearing on Monday next week (April 29).

US firm cements African business with Ksh7Bn factory in Kenya