East Africa is facing a serious threat posed by billions of locusts–the most dangerous migratory pests, threatening food security in the region which is also enduring, through climate change, stress impacting food security in Somalia, South Sudan, Kenya and some parts of Tanzania.

According to the Food Security and Nutrition Working Group (FSNWG), East Africa is already being threatened with 19 million people facing acute food insecurity.

In January swarms of locusts made their presence known when they took an Ethiopian plane off course, and invaded Ethiopia, Somalia, Kenya and took Uganda and Tanzania in February.

This could be the worst case of locust outbreak over the decades. According to the Food and Agriculture Organization (FAO), there is an unprecedented threat to food security and livelihoods in the region, as a new swarm is forming and expected in March and April.

UN agronomy experts warned that the wave of locusts in Somalia might become the region’s next plague, as climate-change-driven-rain was cited to be the trigger of the deadly pests breeding.

According to FAO, locusts are highly mobile, with the possibility of migrating up to 150Km a day with wind, with the power to wipe out a vegetation landscape, leaving large-scale agricultural and environmental destruction behind.

A single locust plague can lead to a loss of 170,000 tonnes of grain, enough to feed one million people for a year.

There were six major desert locust plagues in the 1900s, the last of which was in 1987-89. The last significant surge was in 2003-05, according to information from Aljazeera.

World Food Programme (WFP) Executive Director David Beasley, said that it will be vastly more cost-effective to support the FAO tackle locusts in East Africa now rather than to help people in the region after their crops have been wiped out.

FAO, WFP, the Famine Early Warning Systems Network (FEWS NET) and the Inter-Governmental Authority on Development (IGAD) gave an update declaring that: “Looking forward, given favorable forecast weather conditions, swarms are expected to increase in areas already affected, as well as spread to neighboring areas. There is also a high risk that locusts will spread to South Sudan,”

In addition, the food security update insisted that locusts were expected to breed and spread in the coming months. It forecast that the March-April start of the long rains would prompt the locusts to breed anew and spread even further.

According to FAO locust forecasting expert, the current swarm of locust is starving, and they are expected to be more deadly once they mature and hence—once they hatch, they could increase 20-fold in numbers.

Even FAO experts find the current disaster tough; thus—the agency has called for international donors to provide about $76 million immediately to combat the locust threat.

According to The National—a UAE based newspaper, FAO has managed to mobilize $15.4 million of the $76 million raised to assist Kenya, Ethiopia, Somalia, Eritrea, and Djibouti.

With the funds, FAO noted that, it will be able to provide affected growers with farming packages, veterinary care to pastoralists’ vegetation-starved livestock, and channeling cash to families who have lost their crops so that they can purchase food

Up until mid-February, the FAO had managed to raise $22 million to assist five countries initially impacted.

According to FAO’s latest report, there are locusts breeding in several areas in Somalia which became the first country in the Horn of Africa to declare the locust disaster as a national emergency.

“Food sources for people and their livestock are at risk. The desert swarms are uncommonly large and consume huge amounts of crops and forage”, read the statement in part from the Ministry of Agriculture.

The swarms are considered to be the largest in Somalia in 25 years, and a cloud of fear is looming regarding the fate of the April harvest if the locusts are not controlled immediately.

Somalia is still an unstable nation, so the disaster could cripple the food systems significantly.

Reports from The Guardian and BBC noted that due to security risks in Somalia posed by Islamist extremist group—Al Shabab, aerial spraying is difficult in areas it controls, and this intensifies breeding as large swathes of locusts are found in those regions.

“Given the severity of this desert locust outbreak, we must commit our best efforts to protect the food security and livelihoods of the Somali people”, said Minister of Agriculture Said Hussein.

In January, news outlets began reporting on desert locust invasion in Kenya. Reports noted that the current locust outbreak is the worst in 70 years, and the changing climate has contributed to the breeding conditions. The billions of finger-length locusts as described by Business Insider, made their way from neighboring Somalia and Ethiopia.

According to Kenyan authorities, about 70,000 hectares of land in Kenya have already been infested, while a single swarm makes 150 million locusts per square kilometer of farmland, equivalent to 250 football fields, The Guardian revealed.

In northeastern Kenya, one large swarm of locusts was measured to be 60km long by 40km wide. 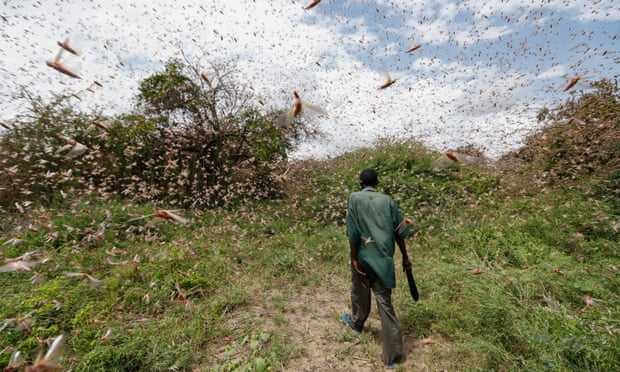 Also, authorities noted that Kenya needs more spraying gear to add up to the four planes it has now flown over the infested areas. Also, the region needs a significant supply of pesticides.

The East African reported that Ugandan officials are planning to send 2,000 soldiers to the impacted region and supply equipment to tackle the infestation.

Further, the locusts were spotted in Amudat District in the semi-arid Karamoja sub-region and within hours the swarm had migrated to two other districts.

In tackling the emergency, Ugandan Prime Minister sat with officials on Sunday February 9to strategize on how they will tackle the invasion. The Ugandan government has set aside about $4 million in dealing with the swarm of locusts.

However, on Monday February 10, the Ugandan cabinet approved $1.8 million to help in the fight against locust invasion via aerial spraying and the government is negotiating with Kenya in leasing aircrafts for spraying.

Also, the government of Uganda is considering aerial spraying of the locusts.

According to Anadolu Agency, John Martin Owor, a commissioner in the Ugandan Department of Relief, Disaster Preparedness and Management said the locusts migrated to Uganda via northwest Pokot district in Kenya, where they had destroyed hundreds of acres of vegetation and have started destroying vegetation in Uganda.

Locusts were spotted in a village in the Kilimanjaro region in northern Tanzania, the Regional Commissioner confirmed on February 10.

He has confirmed that experts have already been deployed to various areas in Kilimanjaro to contain the invasion. 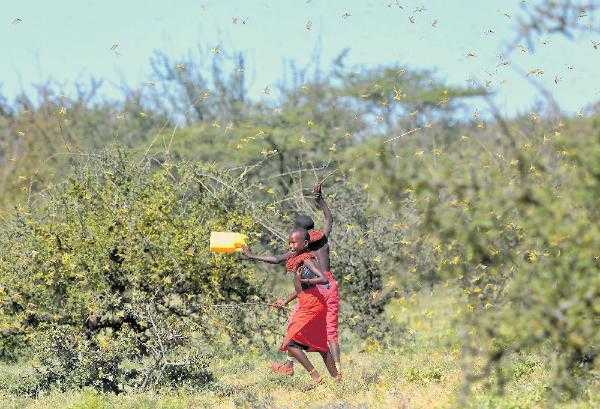 Further, the ministry said that they have already shared knowledge with Kenya on dealing with the invasion, and pesticides for spraying have been procured.

On February 11 Tanzania Meteorological Authority (TMA) highlighted that according to weather trends in the northern region, wind—which is a crucial factor behind locust migration, has currently recorded at 20 to 25 km per hour.  For locusts to spread to other areas, the wind would have to blow at 28 km per hour.

“Locusts infest when the wind settles.  At the moment the wind is blowing at a low speed, and has been forecast for the next  coming 10 days, from February 11 to 21, 2020 to blow at a similar rate,” TMA Forecasting Manager, Samwel Mbuya told members of the media in a press briefing in Dar es Salaam.

In addition, the ministry has shared that research findings in Katavi, Singida and Kigoma regions have found signs of breeding ground for red locusts—a large grasshopper species found in Sub-Saharan Africa, which differs from the desert locusts.

In regard to the government’s readiness at the regional level, minister Hasunga commented that there are about 53 agricultural officials national wide, trained on ways to deal with the pests.

The region has a lot at stake in terms of food security as drought and shortage of rainfall has affected food production.

FAO statistics show rainfall has been 50 per cent less in the Horn of Africa affecting Uganda, Kenya, and Somalia—in which over two million people are threatened with food security and drought has affected up to 85 per cent of crop-land.

Unpredictable natural forces such as drought and crop diseases have already placed a lot of strain on individual East African currencies.  The desert-locusts outbreak could cause major price inflation if they consume farmlands set-for-harvest in affected regions.