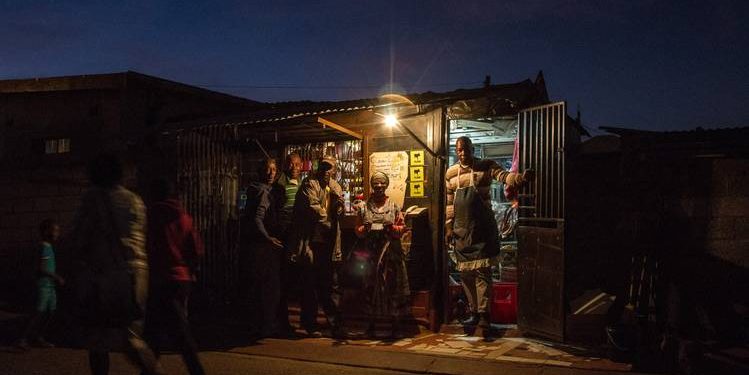 South Africa could remain in darkness until Sunday

Eskom has struggled with its coal-fired power stations and repeatedly implemented national wide power cuts dragging the economy into a second recession.

South Africa, Africa’s second-largest economy is still experiencing power cuts off as the national power utility stated today on Thursday that, nation-wide power cuts across South Africa of up to 4,000 megawatts will last throughout the weekend and power kicking back on Sunday

According to information from a South African financial publication Moneyweb, the power cuts are due to the wait of regulatory approval to reconnect a unit at a nuclear power station in Cape Town (Koeberg).

Eskom, which produces more than 90 per cent of the electricity in Africa‘s most industrialized economy, ramped up power cuts to 4 000 MW on Tuesday after a fault with a pump at Koeberg, the country’s only nuclear station.

“Due to a shortage of generation capacity resulting from unplanned breakdowns, Eskom will continue implementing Stage 4 load-shedding until further notice. We expect that load-shedding, at various stages, may continue into the weekend,” Eskom said in a statement.

Over the past year, Eskom has struggled with its coal-fired power stations and repeatedly implemented national wide power cuts that have hurt the national economy quite immensely, even dragging the economy into a second recession.

“The pump fault on Koeberg Unit 1 is being fixed, and it is envisaged that the unit will be back in service at the weekend. In the meantime, we continue utilising emergency generation reserves, including diesel, to supplement supply,” Eskom said.

Also, Reuters reported that Mining and manufacturing data due later on Thursday are expected to reflect the impact of unreliable power supply.

From Jack Ma to Safaricom, coronavirus unites all peoples