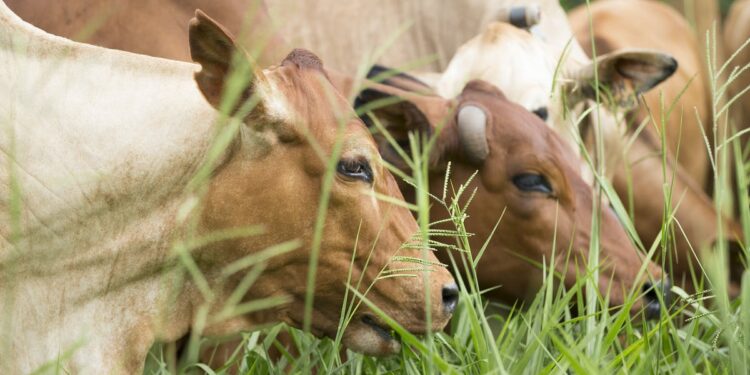 African cows produce 20x less milk than those in the US.

On average, dairy cows in Africa produces an estimated 540 litres of milk per lactation, by contrast, their cousins in the US produce up to 10,479 litres, that is more than 20 times more milk per lactation cycle.

What causes this difference, why are African dairy cows producing so much less milk than their counterparts elsewhere in world? The simple answer is the breed type.

However, there is also the question of the quality of their feeds and forage.  Simply put, ‘the more nutritious cows’ diets are, the more and better quality milk they produce.’

Small-scale farmers – of which there are about 33 million in Africa, contributing up to 70% of the continent’s food supply – usually cannot afford more nutritious feed.

In Tanzania, the livestock sector accounts for 10% of GDP (Bukuku, 1993). The livestock sector is dominated by smallholder owners who constitutes 99% of the national stock. Just to give you a picture of how much power is wield by these so called smallholder owners: “Tanzania accounts for 11% of African cattle population (FAO 2014) and about 1.4% of the global cattle population.”

The country has about 30.5 million cattle and leaving aside farming activities, the livestock sector alone employs more than 50% of the Tanzanian population.

While smallholder farmers may not be able to afford expensive feed, they surely can afford to grow or source grass, but not any grass. Meet the Brachiaria, the genus name of Urochloa, a species of grass known more commonly as palisade grass.

The Brachiaria is native to tropical and subtropical regions of Asia, Southern Europe, the Americas and even Africa. It is revered as the single most important genus of forage grass for pastures in the tropics.

Brachiaria grass produces a lot of nutritious biomass, as much as 15 tonnes of dry matter per acre/year, which in turn, when fed to livestock, increases milk and meat production, reads a document by Feed The Future Kenya.

It describes Brachiaria grass as drought tolerant and adaptive to low fertility soils of sub-Saharan Africa. Further still, where it is cultivated, it can play a significant role in soil fertility improvement, soil conservation, increasing bio-diversity and minimizing greenhouse gas emissions.

This grass species is hailed as the secret behind Brazil’s booming beef industry. Authorities there have even dedicated some much investment to grow the grass that currently, the country has cultivated over 99 million hectares of land to grow the Brachiaria grass.

The hailed Brachiaria forage has high biomass yield and is adaptable to low-fertility soil making suitable for cultivation even in tough conditions. It actually is said to increase soil stability, reduce erosion and of course, as a green grass, it reduces our carbon footprint, it is by all accounts, a true wonder grass.

Ok done deal, if this grass will increase dairy cows’ milk production (or beef quality & quantity) why are Tanzanian farmers not feeding their cattle on this magic grass? One reason stands out, lack of knowledge. You see, apparently the Brachiara is native to Africa as it is in other tropical areas however, it is simply not widely cultivated in Tanzania or anywhere else on the continent.

So at the moment, farmers are forced to import the seeds from other tropical countries that cultivate the wonder grass on much larger scales but they are forced to do so at rather expensive prices.

It is now evident that, Africa must increase its own production of the Brachiaria grass if it is to increase and improve its dairy and beef cattle production.

Earlier this year,  InnovAfrica, a project committed to improving the productivity of smallholder farmers in Africa, organized a policy dialogue meeting. The meeting was held in Rungwe District, Mbeya Region to deliberate on food security.

It is no surprise that the solution that was brought to the table was none other than the wonder grass, Brachiaria. The meeting discussed  ways to better grow the Brachiaria forage grass to increase milk production in the country.

“This project is focused on promoting Brachiaria grass farming as an alternative way to get better food for livestock which in result will help increase the production of quality milk and then the farmer sells milk and increases their income but also when the milk is used by community members it help improves their health and nutrition”, commented the Director of the Directorate of Postgraduate Studies, Research, Technology Transfer and Consultancy Prof. Esron Karimuribo

“We assume integrating Brachiaria grass into mixed crop-livestock system will enhance feed availability and livestock productivity, leading to increased food and nutrition security,” write the authors of a report titled ‘Brachiaria Grass for Climate Resilient and Sustainable Livestock Production in Kenya’ that is published in the African Handbook of Climate Change Adaptation (21.05. 2021)

“To achieve a sustainable impact of Brachiaria grass in the Kenyan livestock sector, a wide-scale adoption of this grass is necessary,” reads the report.

The authors maintain that to achieve this goal, then it requires selection of right cultivars for a given production environment prior to integration in the farming system, and engaging farmers in the cultivar selection would be crucial for adoption and scaling of the technology.

In this regard, it follows that countries across the continent would do well to follow suit. Tanzania and Kenya have started to take steps in the right direction but some would argue it is just too little too late, however what is that other saying, ‘better late than never.’

Milk demand projected to increase by 3.5% in Dar