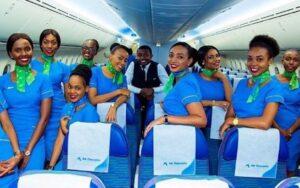 Tanzania’s national carrier, Air Tanzania Corporation Limited (ATCL) has signed a deal that will allow passengers across the region (and continent) to purchase tickets digitally via the CRDB Bank digital portal.

In this latest move, Air Tanzania has effectively beefed up its command of the East African skies couple with several interline deals and Air Tanzania is quickly becoming a formidable carrier to contend with.

In the same vein, Air Tanzania also recently launched direct flights to Kenya’s capital, Nairobi. Officially launched on November 26, the new route is but a predecessor spelling more ‘air control’ for the Tanzanian national carrier which this month again extends its wings to Bujumbura, the capital of Malawi.

When you add Ndola city, the business capital of Zambia and Lubumbashi, the commercial capital of the DRC, then you get a whiff of just how fast the Tanzanian national carrier is moving to take over the regional air space.

When we combine signing of the digital purchase of tickets via CRDB Bank, Tanzania’s largest bank (customer-wise), Air Tanzania is moving to add not only West and South African routes to its list, the national career is actually well on the way to introduce flights even to the United Kingdom and China.

With the signed pact, airline passengers can now purchase tickets via the bank’s digital platforms both online and on their mobile platforms like Simbanking. Passengers can also buy tickets physically at the bank’s alternative banking channels like their 20,000 plus agents and at any of the bank’s branches spread across the country.

The CEO went on to detail that this is actually not their first payment synchronization with ATCL but rather an elevation from the previous reliance on the bank’s debit card, TemboCard.

“What this means is that passengers can now buy tickets using the new integrated system even if they do not hold an account with CRDB,” added the CEO.

In his comments, the ATCL Managing Director and CEO, Eng Ladislaus Matindi commended CRDB for what he described as ‘a most innovative customer-centric approach to business.’

Citing that now the airline commands 75 per cent of Tanzania market share, Eng. Matindi was proud to assert his confidence in this partnership and what it means for ATCL’s promising future; “In the near future, we will introduce the same strategy for our overseas routes to Nigeria, South Africa, China and the United Kingdom,” Eng Matindi said.

“We are confident that this partnership with CRDB will help us achieve our goal of providing quality air transport services in and outside the country…this payment system integration is in line with our domestic and international expansion programmes,” he told local media.

Summing up, ATCL Managing Director and CEO explained that, “…all a passenger needs to make payment at any of the bank’s branches or agents is to show their ticket reservation number. If they want to do it digitally let’s say via SimBanking, then all the passenger has to do is go to the menu, select payment and then choose ATCL airline, then simply enter the reservation number and then make the payment.”

It goes without saying that these ambitious expansions of flight routes within and without the region mean growing competition for traditional air leaders the likes of Kenya airways and to some extent even giants like Ethiopia airlines.

For example, as mentioned earlier, in its expansion, Air Tanzania has also embarked on direct flights to Nairobi placing great pressure on Kenya Airways that previously controlled this route.

Not only is Air Tanzania offering flight options on a route that was domestically almost exclusive to Kenya Airways but it is doing so at lowered rates. Now if that is not a cut-throat competition I don’t know what is. It is a move that the  local media is warning  will trigger ‘price wars between the carriers.’

An interline agreement is a system that allows one airline to manage check-in and baggage for passengers of another airline. Here is another expansion avenue that the Tanzania national carrier (ATCL) has embarked on.

In its most recent interline agreement, ATCL is in the last stages of a pact with Uganda Airlines (UA) that will further streamline air travel for East Africans.

Here is how it works, once complete, the interline agreement will allow passengers to check-in only once and be covered for all the flights on their itinerary i.e. once checked in, a passenger will not need to check in again for another flight that is on their itinerary.

The interline system does not end there, it even covers baggage transfer for the passenger from the first airline to the second one, without the passenger having to go through the hustle of doing it manually.

Following suit in this endeavour is Ugandan Airlines which has not only inked a partnership with Tanzania’s national carrier but gone a lot further and signed deals with airline giants the likes of French APG Airlines, Qatar Airways, and Emirates.

What is most commendable on the part of UA is that this is only its second year of commercial operations. Yet already the airline is getting ready for long flights to Dubai, London, China and India.

In Africa, the UA is already doing an impressive job flying to all neighbouring international airports including Dar es Salaam, Kilimanjaro and Zanzibar in Tanzania, Nairobi and Mombasa in Kenya, Mogadishu and Juba in Somalia, Bujumbura and Kinshasa in the DRC and Johannesburg in South Africa.

An Interline agreement is an agreement between two or more airlines to help each other handle passengers whose flight routes to a given destination requires travelling via multiple airlines.

Among other things, airlines that sign the interlining pact, agree on single sign-in for passengers and for the handling of their baggage during flight transfers until their arrival to the final destination.

In the case of the Uganda Airlines interline deal with Tanzania’s ATCL, travellers from countries such as Uganda and Tanzania, no longer have to transit via Jomo Kenyatta International Airport to destinations where their local carriers do not fly.