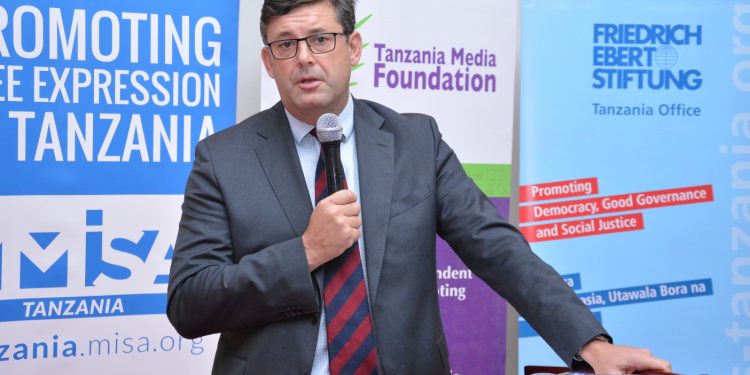 Tanzania and the EU have been partnering in ensuring high quality livelihood, peace, stability and unity, good governance, educated and learned society

The European Union (EU) has reiterated its commitment to continue supporting the government towards achieving its industrialization strategy and middle income status by 2025.

The European Union Charge d`Affaires to Tanzania, Charles Stuart made the remarks on Thursday in Dar es Salaam during the commemoration of the 69th anniversary since the signing of the Schuman Declaration which marked the birth of the EU.

The occasion was also attended by heads of diplomatic mission in the country, government officials, representatives of Non-governmental organizations (NGOs) and civil society organizations.

He said that Tanzania and the EU have been partnering in ensuring high quality livelihood, peace, stability and unity, good governance, educated and learned society. He mentioned others as a competitive economy capable of producing sustainable growth and shared benefits. He said the above mentioned matters have been worked together since that partnership began.

` Our trade and economic relations are maturing and are inspired by mutual interests. Investment are coupled with transfer of knowledge, trade acknowledges that markets are growing in Africa not only as a source of raw materials but also trade and investment that pursue diversification which adds value and regional integration,` he noted.

`We started as a small group in the past 69 years and we have grown and we are likely to continue growing. This is not about enlargement but contemplate our own future, we think too of cooperation with our partners as they evolve too, said Stuart.

He added: `Europe and Africa have close historical, cultural and geographical ties. Here in Tanzania, you can count on the partnership of the European Union not through charity but because we seek common goals.  `According to him, EU serves as a body, just as the United Nations, that seeks common ground in the name of justice, equality, dignity and rights for all citizens.

`We value human beings, their rights and we value peace, democracy, freedom to talk, to share and to connect, ` Stuart explained. `I believe that this partnership we have with Tanzania and its partners in the East African Community is precisely the kind of opportunity we have together to promote peace, prosperity, integration and security, he emphasized.

He further stated that EU looks at its partners to cement and bind the existing destinies, values and interests. `I believe we have true cause to celebrate the 44 years of partnership with the Tanzania and it is my sincerest hope and belief that the best is yet to come, ` he said.

The European Union support for Tanzania focuses on three sectors which contribute to the achievement of the strategic objectives of the EU-Tanzanian relationship; and are coherent with both the Government national development strategies and the EU Agenda for Change. The support focuses on good governance and development, energy and sustainable agriculture.