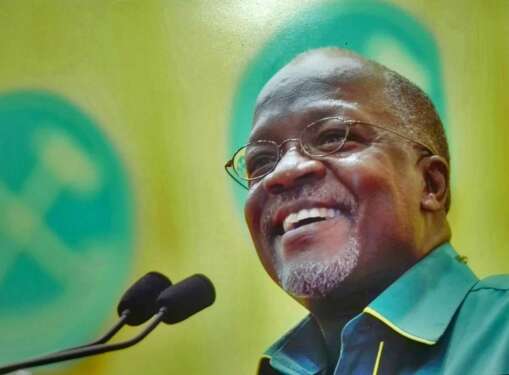 The late John Magufuli was an eccentric president who believed in pan-Africanism and work as common currencies to change Tanzania and Africa.

by Padili Mikomangwa
in Countries, Premium, Tanzania
0
Share on FacebookShare on LinkedIn

Tanzania is in deep grief but also embracing the courage to celebrate its fallen son and leader, Dr. John Pombe Magufuli, who succumbed to heart complications in a hospital in the nation’s financial capital, Dar es Salaam.

The late Magufuli took the helm of power in 2015 and ushered in his style of leadership that was centralized on utilizing the country’s vast natural wealth for the betterment of the nation.

Over five years, the late Magufuli’s administration cracked down on a number of chronic issues including corruption, government over-spending, tax evasion, mineral exportation without due compensation, drugs and goods smuggling.

The government of Tanzania declared 14 days of mourning and the former vice-president, Samia Suluhu Hassan, was sworn in as the sixth Tanzanian president on March 19th 2021.

The late Magufuli is celebrated and mourned across the East African Community which has also joined hands with Tanzania to remember his legacy—which extended from his fight against corruption and the misuse of public resources to his diplomatic relations, forged across the landscape through several regional communities—where on numerous occasions he had declared that ‘we are unified as one’.

Magufuli was a stern advocate of hard work for economic excellence. His voice on this matter was as strong as his willpower. Throughout his unfinished tenure, he had demonstrated how Tanzania can transform its natural wealth and utilize domestic tax collections to fuel development projects.

Magufuli will be remembered in Tanzania as the leader who streamlined robust tax measures, construction of strategic infrastructure and utilization of natural resources.

Infrastructure is vital for any economy to survive and grow sustainably, so as in Tanzania—under Magufuli his administration made a number of strategic investments in building the country’s transport systems and energy structures.

His philosophy was all about getting Tanzania on the right track by building sustainable structures for the economy to work for Tanzania’s interest.

In this context, the flyovers in Dar es Salaam, Standard Gauge Railway and Julius Nyerere Hydropower dam are some of the main signature projects that Magufuli initiated to put Tanzania on the right mark.

Through the hydroelectric dam, Tanzania is at a vantage position to generate more energy (6,307GWh/per annum) and become East Africa’s leading powerhouse.

The late president’s vision was fenced around building Tanzania’s capacity to generate its energy, strengthen its production capacity and attract bigger investments respective to the power capacity installed, and thenceforth to develop Tanzania’s economic systems for the betterment of her future generations.

“We want every village in Tanzania to be electrified,” the late Magufuli said in December 2020.  He said that out of more than 9000 villages nation-wide, only 3000 had not been electrified under the Rural Electrification Agency project.

“If you have higher power prices you can’t compete with other nations producing electricity at cheaper prices; at the same time, you can do the latter on hired capacity. That’s why we built the Nyerere Hydropower dam, which will produce 2115 megawatts, which will ultimately reduce electricity prices, fuel our local industries, generate jobs for our youth and grow our economy” he added.

READ:Tanzania’s 3rd Oil and Gas Congress: How Magufuli is opening up Energy Investment

Since he assumed office, Magufuli began championing proper and due tax payment for all Tanzanians.  The late president’s vision on collecting tax was built on the fundamental essence of financing development projects with internal funds, contributed by every taxpayer in Tanzania.

He gave revenue collection high preference.  Under his administration revenue collection was a task that had top priority. He held strong belief that at least every development project ought to be executed with funding of local taxpayers’ money.

His ideal was that each Tanzanian would be proud to know that whichever the development project, it was due to the proud contribution of each Tanzanian.

“I am a Tanzanian and all Tanzanians ought to pay taxes to build our country. As the representative of the entire nation, I will be the first taxpayer from my pension” Magufuli told Finance Minister Phillip Mpango, who quoted him in his speech before parliament on June 20, 2016.

His constant message on taxation inspired nation-wide adverts that rallied children and adults alike, to ask for receipts for every purchase they did—something which was never done openly in the past, and big taxpayers used that loophole to withhold large sums that would otherwise have been paid as taxes.

Domestic revenue performance has been a stimulating activity across the nation, as several projects were financed by the nation from tax collections, including schools, village and ward hospitals, strategic regional roads and bridges.

During the 2019/2020 financial year, the Tanzanian Revenue Authority (TRA) collected more than $7.3 billion in taxes which was a 90 per cent mark on the general target of garnering $8.1 billion, according to a publication by The Citizen.

His legacy for revenue collection is still alive, according to the central bank’s monthly economic review February report, as more than $543 million in tax revenue was collected in January 2021 which was fared moderately below target.

Magufuli will be remembered and celebrated as the leader who pioneered transformative laws and standard operating procedures in the extractives industry, which was clouded by inconsistencies and malpractices.

Under his leadership, he passed robust new laws in 2017—which were targeted at securing a larger and fair share of the benefits from its abundant mineral and gas reserves across the Tanzanian landscape. The changes included a deliberate increment in the taxation of the mining industry.

Throughout the history of extractives operations in Tanzania, difficulties were noted that marred the effective progression of the economy in Tanzania, particularly in maximizing revenues and curbing tax evasion.

His crackdown on Barrick Gold (formerly Acacia Mining) mining issues sent a clear message to the entire industry and the rest of the world, “Tanzania is awake and ready to deal with anyone on the right terms”.

Presently, Barrick Gold is repaying its $300 million tax settlement. The historic settlement has seen the birth of a joint venture, Twiga Minerals Corporation between Barrick and the Government of Tanzania that will oversee the welfare of the country in a 50-50 benefit sharing partnership, ushering in a new dawn in the country’s gold mining sector.

Tanzania remembers a leader who brought back some of the nationalism ideologies from Julius Nyerere and mixed his vision, to set a foundation for Tanzania to become an industrialized nation and a powerhouse to reckon with.

It is with no doubt that his successor President Samia Suluhu Hassan, will carry the torch and reignite the late Magufuli’s spirit and vision in pursuing Tanzania’s development.

The late Magufuli was buried in his home town Chato, northern Tanzania, on March 26th.