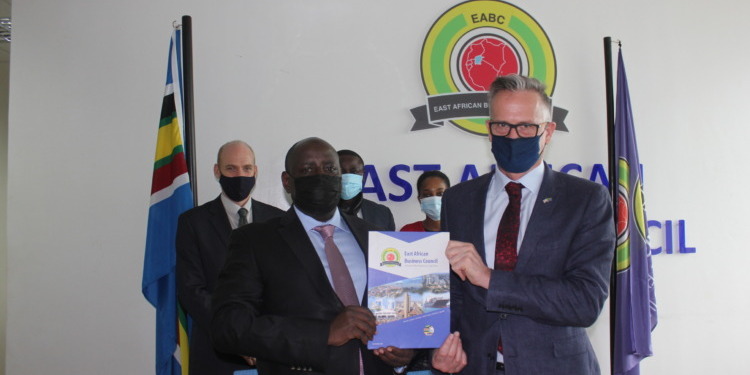 The UK High Commissioner was welcomed by EABC Chief Executive Officer Mr. John Bosco Kalisa on Monday July 05, 2021 which was his debut day in office.

Mr. Kalisa who made his remarks while in his office appreciated the United Kingdom (UK) support to East African Business Council through TradeMark East Africa (TMEA) and highlighted the importance of the private sector as the driver of socio-economic growth in the East African Community region.

Established in 2010, TMEA supports a portfolio of programmes across the East Africa Community partner countries, working closely with our partners – the EAC Partner States, EAC Secretariat, the private sector and civil society – TMEA has made a significant contribution to this growth by delivering large scale impact in its highly successful first strategic phase which was completed in December 2017.

He further noted that EAC bloc is the fastest growing regional economic community in Africa projected to grow at 3.6% in 2021(AfDB).

“EABC has been at the forefront of supporting resilience and recovery by calling for a regional coordinated approach on the handling of COVID-19 in the EAC. COVID-19 was projected to cost USD. 37 billion – USD. 70 billion as output losses on EAC countries,” said Mr. Kalisa.

He elaborated on the importance of strengthening public-private dialogue from national to EAC and AfCFTA levels, support to Youth and Women in Business, Digitalization for  COVID-19 resilience and recovery, elimination of Non-Tariff Barriers, tackling climate change and Green energy as well as trade facilitation and digitalization of infrastructure – ports  and roads.

“With the deep political commitment and goodwill from the Summit of the EAC Heads of State, there is high hope and optimism on openness and growth of trade and investment in the EAC bloc,” Mr. Kalisa further elaborated.

Way out of poverty

On his part, H.E. David Concar, United Kingdom – High Commissioner to Tanzania said, the EAC regional integration is a way out of poverty, an opportunity to create more jobs for the East African youth for sustainable development.

David Concara congratulated and appreciated Mr. Kalisa for kicking off his first day of duty at EABC Secretariat Offices in Arusha, by hosting his delegation.